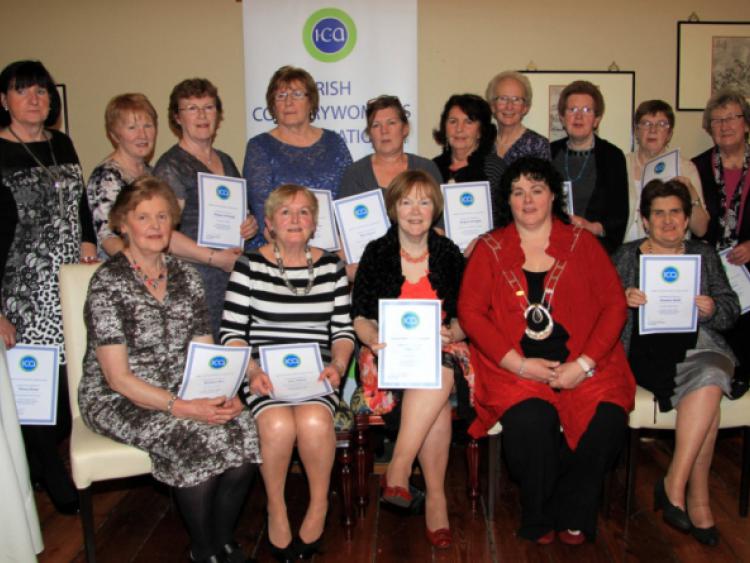 Old friends reunited and new friends were made recently, as the Longford Federation ICA held a gala dinner and

Old friends reunited and new friends were made recently, as the Longford Federation ICA held a gala dinner and

Almost 100 women of all ages and walks of life attended the event, which was held in the beautiful Newcastle House, Ballymahon. A great evening of chat, laughter, celebration and even song was had by all, with members from all Longford guilds gathering to honour their fellow members.

The inaugural event, introduced by ICA National President, Liz Wall, honours members who have been with the ICA (Irish Countrywomen’s Association) for twenty, thirty, forty and even fifty years.

Federation President, May Campbell, believes it is important to reward their members for their loyalty to the association. “It’s very important to acknowledge all the hard work and commitment over the years,” she explained.

National President Liz Wall agreed, saying; “If they’re involved in the ICA, they have worked very hard with and for the association. It’s a nice way to honour them.”

Stating that both Federation President May, and the Federation’s members were all “wonderful”, Liz fondly recalled her last visit to Longford.

“Here in June, they did the most wonderful two days of craft. I was blown away,” she admits, adding, “If you have a Federation that puts so much work into everything, it will thrive.”

A member of the ICA for 22 years, Liz reveals that she has learned a lot, saying that her life would not be as rich as it is now if not for the association.

“I am very honoured to be the president of, I would see it, 10,000 amazing women,” she concluded.

Founded in Ballinalee in 1939, the Longford Federation ICA has grown and evolved to meet the needs of its members.

Recalling the earlier days, recipient of an award for 50 years as a member, Annie McKenna, told the Leader “I joined in the early 70’s myself.” Annie, a member of the Ballinalee guild, explained that the members used to carry out “every craft in the book,” adding that there were awards for the various activities, presented at a Federation awards night at An Grianán, Dublin.

Honoured for more than 30 years of membership, Kathleen Caherly, a member of the Ennybegs guild told of how she was Federation Treasurer when the President’s chain was introduced to the Federation. Kathleen continued, saying that she got “lots of pleasure” out of the ICA, and would like to see younger people joining.

There is, of course, a preconception when it comes to the ICA. Popular opinion seems to be that the association consists of older ladies who sew, knit and bake. Stepping into a room where Longford’s ICA guilds were gathered, it seems this couldn’t be further than the truth, as many of the members testified.

Ann Devlin, a member of the Newtownforbes guild summed it up, saying; “It’s not what ICA is perceived to be. It’s modern women working in a modern environment, and that’s really what it’s all about.”

“It doesn’t matter what age you are to enjoy the friendship, fun and education,” explains former Federation President, Stephanie Igoe. “What the ICA can provide that other groups can’t is an ongoing friendship and learning experience.”.

For more information on the ICA and the work they do, or to learn more about the Longford Federation ICA and its guilds, visit the ICA website on www.ica.ie