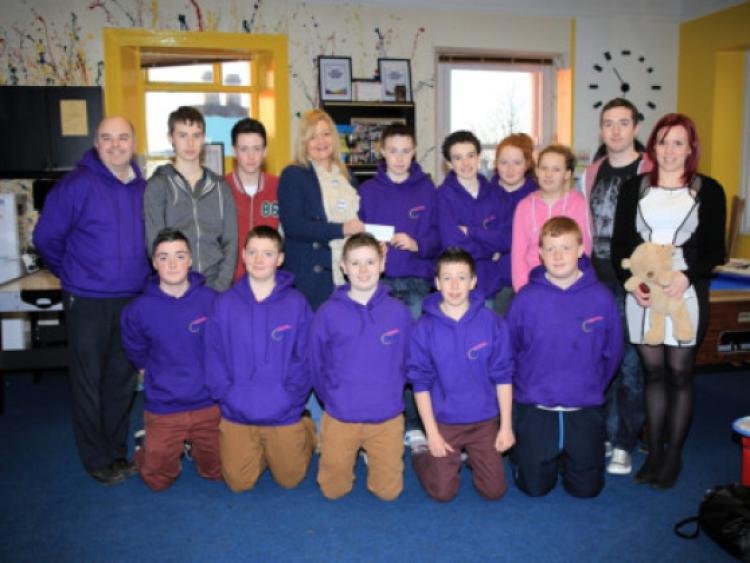 Edgeworthstown Foróige Club recently presented a cheque to Little Max and his family of funds they raised from a disco they held at Christmas time.

Edgeworthstown Foróige Club recently presented a cheque to Little Max and his family of funds they raised from a disco they held at Christmas time.

Foróige has become one of the fundamental stepping stones for young people in Co. Longford as communities look to provide their young people with a chance to socialise and develop outside school hours.

Since Foróige was founded in 1952, it has become Ireland’s leading and most successful youth organisation boasting over 60,000 members nationwide. Foróige Clubs are made up of young people aged between 12 and 18 from the community and are run by trained volunteers.

Edgeworthstown Foróige Club was founded in 2010 and since then has become a central part of the Edgeworthstown community. The club offers members a safe recreational space to meet with friends, play games and hang out. The club meets every Friday night in The Green in Edgeworthstown throughout the school year.

Every year Edgeworthstown Foróige try to do something for the younger children in the community. This year the club heard about Little Max Wenman, a two-year-old boy suffering from neuroblastoma, and decided to do something to help him and his family. They held a Christmas disco in the Edgeworthstown Community Centre for primary school children and donated all money raised to Little Max and his family. The disco was a great success and the club raised over €200 which was presented to Little Max’s family earlier this month.

Edgeworthstown Foróige Club is planning a trip away to Delphi this Summer and the members have been very busy with fundraising events such as Easter Egg Raffles and bag-packing. Despite their busy schedule however, the club has also been working with Cllr Tom Victory and the Edgeworthstown Tidy Towns Committee to keep the village and its surrounding area free from litter. The club also promoted farm safety at the Longford Ploughing Championships in Edgeworthstown last Sunday and hope to attend HYPE 2013 in Longford Town in May.

Jim Maher, Regional Youth Officer for Foróige in Longford, told the Leader: “It’s important that communities embrace their young people and provide them with an outlet like that of a Foróige club to aid young people in their development and the development of their society. Edgeworthstown Foróige Club is a credit to their community and I wish them the very best for the coming year.”

As Edgeworthstown Foróige Club grows, so does the need for new volunteers. If you are interested in becoming a volunteer please contact Tara on 089 4007175.