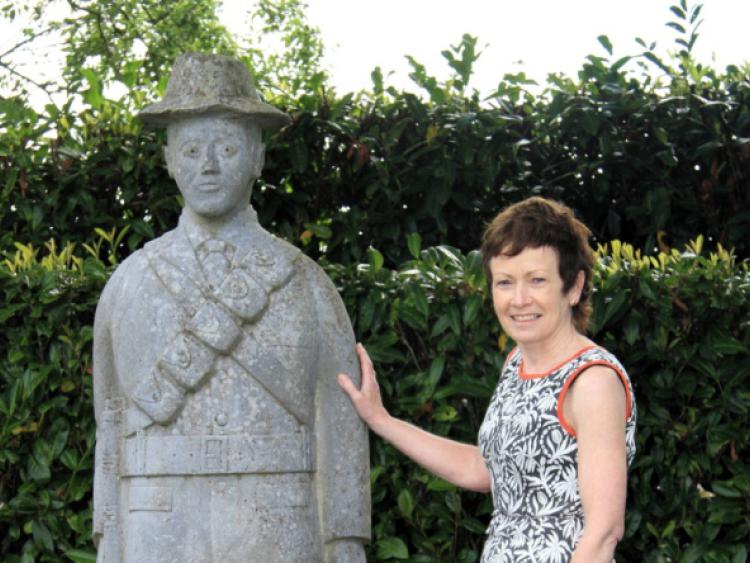 Sixty years after it was removed from its plinth, a statue which once stood at Banba Square in Nenagh, Co Tipperary, has been rediscovered in the grounds of a well known Longford restaurant and guesthouse.

Sixty years after it was removed from its plinth, a statue which once stood at Banba Square in Nenagh, Co Tipperary, has been rediscovered in the grounds of a well known Longford restaurant and guesthouse.

‘Jamesy’, as the statue was unofficially known to locals, had been erected in the town in 1931 to commemorate natives of the area who died during the War of Independence.

However, its design proved to be controversial and prompted the local bishop, town councillors, and even a newspaper editorial to call for its removal, which occurred in 1955.

The statue’s fate became a topic of discussion in Nenagh for many years afterwards and even inspired one local publican to name his bar Jamesy’s in honour of it, but it wasn’t until an historian from Nenagh recently paid a visit to Viewmount House in Longford town that the mystery of its whereabouts was solved.

“A man called Aidan Dillon was staying with us and he became intrigued by a statue in the garden,” explained James Kearney, who runs Viewmount House alongside his wife Beryl. “He got very excited when he realised what it was!”

And such was the interest in the statue’s discovery that the Nenagh Guardian newspaper reported on Jamesy’s location last week.

Mr Kearney told the Longford Leader he purchased the statue at auction in 2012.

“We picked it up for €4,500 at a Mealy’s auction in Castlecomer and we had been told of its background.”

He further added that the artwork, which was crafted by Doheny of Templemore, had been inspected by Ken Thompson, the stonemason who created the Stations of the Cross for the refurbished St Mel’s Cathedral, who declared it to be a “masterpiece”.

“He said there are no seams on it; it’s made from a single, solid piece of stone that any stonemason would be proud of, and anyone who doesn’t recognise its quality is an idiot!,” Mr Kearney laughed.

While Jamesy may draw added custom to Viewmount House from Co Tipperary, Mr Kearney insisted he would resist any overtures to return the statue to Nenagh.

“It’s definitely staying here. It’s not for sale at any price!”