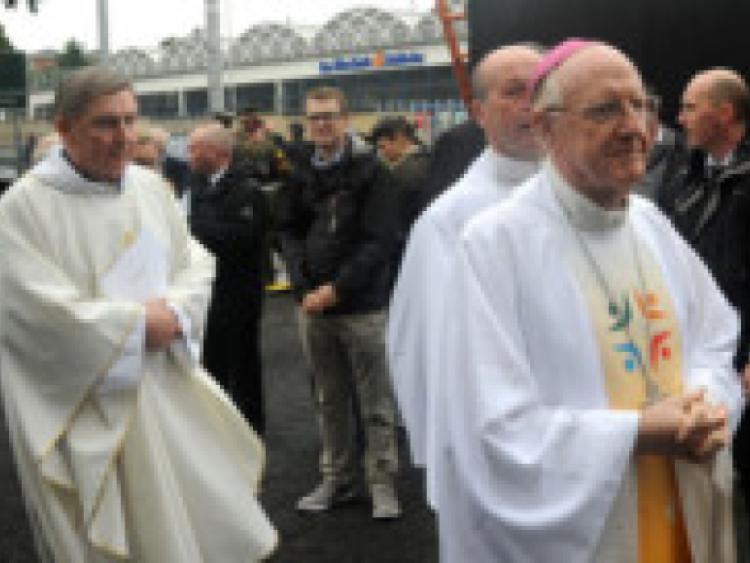 Whilst the TV cameras and press photographers largely focussed on the major political figures attending the funeral mass, there was understandably a significant number of friends who travelled from Longford and further afield to pay their final respects.

Whilst the TV cameras and press photographers largely focussed on the major political figures attending the funeral mass, there was understandably a significant number of friends who travelled from Longford and further afield to pay their final respects.

There was a sizeable number of the local Fianna Fail in attendance and they included Tom Donlon from Longford town, who ran for the party in the Longford Urban election in 1974. That was the year that Albert was first elected to Longford Council with an impressive 900 plus votes and he never looked back. Throughout his subsequent political career, Tom Donlon remained one of Albert’s closest allies and confidantes in Longford. Also in attendance was former Co Councillor, Jimmy Coyle from Edgeworthstown, who was another of the newcomers in that 1974 election and a lifelong supporter of Albert.

Longford Fianna Fail’s Sean Reilly from Dring organised the bus that ferried the faithful to pay their final respects to one of the great leaders of our time. Amongst those travelling were sisters, Mae and Dympna Sorohan, who have been great friends with the Reynolds family over the years. Also on the bus was Paul Murtagh; the Longford town historian, Jude Flynn and Margaret O’Hara from Bawn, Drumlish.

The Glennon brothers, Pat and Mike, of the Longford based timber business, Glennons, were there and Mike was accompanied by his wife, Sharon. From Longford town’s Gem Construction was Vinnie Fay and his wife, Lorraine. Vinnie is a great friend of Philip’s and indeed all the Reynolds, but shares a love of horses and hunting with Philip in particular.

A welcome fellow traveller on the Longford Co Council bus was former Bishop of Ardagh and Clonmacnois, Colm O’Reilly, who participated in the Funeral Mass. Amongst the other priests in attendance from the Diocese were Monsignor Bernard Noonan and Fr Vinnie Connaughton. Longford Co Council was also represented by Co Manager, Tim Caffrey. Another familiar face was the well known local farmer, Owen Balfe from Ballymacormack.

A great race goer and a man who most likely met Albert at every race track in the country is Tommy Noel Donlon from Farnagh Hill, Longford. He was accompanied to the Funeral Mass by his son, Fergal. It reminded us of Albert’s other great race going partner, Tommie Cowan from Longford town. There was a famous night in Listowel many, many years ago when the future Taoiseach shared a room with between ten and twenty people – depending on who tells the story. Asked several years later if he knew the Taoiseach, Tommie Cowan was once reported to have said: “Of course I know him, sure didn’t I sleep with him”.

The racing community was well represented at the funeral and one of the early arrivers was Paddy Dunican, track manager at our local track, Kilbeggan. Over the years he has had a great relationship with the Reynolds family, who have proven to be staunch supporters of the track.

One of the first to arrive at the Church in Donnybrook was Longford solicitor, Mark Connellan, who grew up with Philip Reynolds and has enjoyed a life long friendship with the Reynolds family. He was accompanied by his young daughter, Grace.

One of Albert’s greatest political supporters in Longford was Noel Hanlon. In later years Albert appointed him as chairman of Aer Rianta. He is now based in South Africa and following a recent hip operation was sadly unable to return home for the funeral of his great friend. However the Hanlon family were prominently represented with Fionnuala Hanlon, accompanied by her son, Patrick, and daughter, Ann Mahon.

A great friend of Albert and all the Reynolds family over the years has been Dessie Hynes, the famed Longford businessman, who now lives in the sunny south east. Indeed one of his grandchildren has been a page boy for Philip Reynolds’ wedding.

Philip’s wife is Ann Farrell, originally from Westport and her mother was Helen Hanly from Rooskey. The Reynolds and Hanly families have been great friends for many, many years and at one point Albert and the late Peter Hanly were neighbours in apartments in Dublin. The next generations of the Hanly family were represented at the funeral with Jim Hanly, head of Rosderra Meats and chairman of Longford Town FC, and he was accompanied by his daughter.

Whilst he hasn’t been in the best of health in recent times, Albert’s brother, Jim, of the Longford Arms, looked well at the Mass and was accompanied by his daughter, Orla. His sons, James and John were also in attendance. Meanwhile Albert’s sister, Teresa Reynolds was accompanied by her daughters, Dympna, and Deirdre Matthews.

Kenagh native and former Director General of the GAA Liam Mulvihill was also there to bid farewell to an old friend.

The Church of Ireland community was represented by Archbishop, Michael Jackson and what many will not have known is that he and Albert were well known to each other from the time when the Church of Ireland cleric’s father, the late Archdeacon Jackson, ministered in Longford town in the early 1990s.

Granard Fianna Fail was represented by Tommie and Marie Flaherty and their daughter, Denise, as well as former county councillor, Fintan Flood. Andy O’Dowd has been part of the Reynolds family for many years through his former life as head waiter at the Longford Arms and he too travelled to pay his respects, as did Gerry Keenan and Micko Connolly, also Longford town.

An ardent supporter of Albert over the years had been Pat Donnelly from Ballinamuck and he was there paying his respects along with Paddy Keenan and Jimmy Leavy from Ardagh. The late Ned ‘The County’ Reilly was one of the real Reynolds loyalists and the Reilly family from Edgeworthstown were represented at the Funeral Mass by Eamon Reilly.

Tarmonbarry man, Padraig Fallon was a familiar face on the reception desk of the Social Welfare office in Longford until his retirement and he was also a great friend and supporter of Albert’s. Pat Fallon from Carramana and his late father had been with the Reynolds phenomenon from the start and we saw him going into the Church in Donnybrook with Clondra publicans, Des and Frances McPartland and Seamus and Stephanie Higgins, the drinks distributors, also from Clondra.

Former Town Councillor, Paul Connell was also in attendance as was Frank Donlon from Longford town, whilst also paying her respects was Colette Reynolds of Hair Sqaure, Longford town.

Ardagh native Martin Farrell, was Albert’s official driver for many years and as the Reynolds family made their way up towards the front of the Church in Donnybrook, they took the time to stop and acknowledge this old family friend. Another great servant to Albert was Pauline Foudy (nee McCormack) who had been his constituency secretary for many years and she was accompanied by her sister, Rose Wyse, also Longford town.

Former TD for Fine Gael, Louis Belton from Kenagh, travelled from Dail Eireann on the Oireachtas bus with several current and former TDs as well as high ranking civil servants.

The RTE news departement put a huge effort in ensuring the smooth running of the live broadcast and whilst Lanesboro’s Ciaran Mullooly was live on the radio several times over the course of the broadcast, it was Leitrim native, Dermot McCarthy, from Ballinamore, who produced the live TV broadcast.

As the attendees mingled outside the Church early in the morning, former district court judge, Michael Connellan from Longford, caught a couple of minutes with the RTE producer as both men are past pupils of Roscrea. The judge was accompanied by his son, Michael Jnr, a solicitor in Longford town and Fianna Fail stalwart.

Another great supporter of Albert’s who passed away recently was John Crilly from Longford town. His son, Kevin, is married to Albert’s daughter, Emer, whilst another son, Robert travelled with John Lyons from Tennis Court Lane, Longford town to the funeral.

Whilst the Funeral Mass truly had an international dimension, there is no doubt that the greatest of Longford men would have had a special place in his heart for the many who travelled over the weekend and Monday to pay their respects.