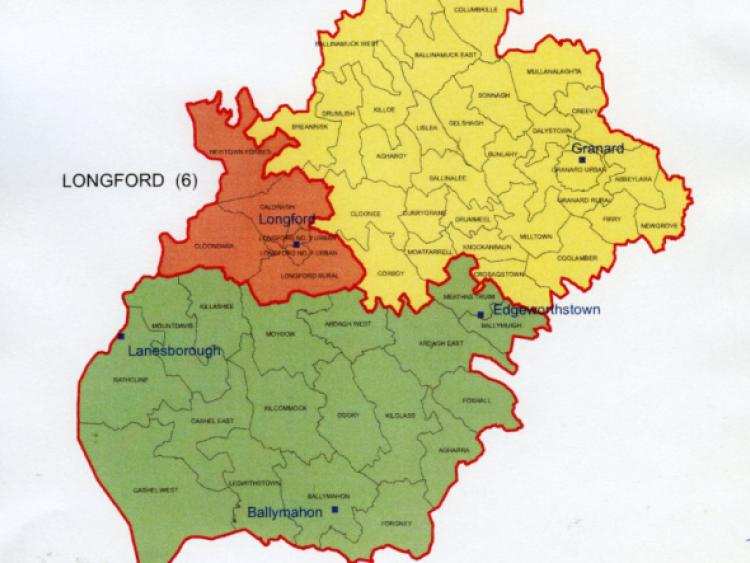 The landscape of local politics in Longford will change utterly when voters go to the polls on Friday, May 23 next.

And unlike the last local elections on June 5, 2009, there will be no election to fill the nine seats on both Longford Town Council and Granard Town Council as they are being abolished under Local Government Reform initiatives.

The budget also provided for €607, 479 in representational payments and expenses for councillors which is a decrease of 8.9%.

Following the publication of last year’s Local Electoral Area Boundary Report, Longford has been carved up into three electoral areas – Ballymahon, Granard and Longford representing 13,284; 12, 539 and 13,177 people respectively, and each will elect six representatives.

The former Drumlish Electoral Area (EA) is incorporated into the much changed Granard EA as is the townland of Killoe. Newtownforbes, which was formerly in the Drumlish EA, is included in the Longford EA, while Edgeworthstown has being switched from Granard to Ballymahon EA.

One third of the twenty-one county councillors elected in 2009 won’t be on the ballot paper in May. Fine Gael’s Gerry Brady, Victor Kiernan and Mayor Larry Bannon, along with Fianna Fail’s Denis Glennon and Barney Steele have indicated their intention to retire from local politics.

In ’09 Alan Mitchell was elected as an FG representative to both Longford County and Town Councils, but following his appointment to the judiciary in 2012, John Browne and Denis Hughes were co-opted to replace him on the county and town councils, respectively.

The sudden death of Paddy Belton (FG) in April 2013 – he was first elected in the Ballymahon EA in 1999 - saw Kenagh native Colm Murray co-opted to fill the vacancy.

Cllr Peggy Nolan (FG), who received the highest number of first preferences of any the candidates – 977, was elected County Mayor at the Council AGM with Independent Cllr Paul Connell voting with FG in a pact to secure control of the local authority.

Thirty-three candidates (to-date) (FG 12, FF 10, SF 2 & Ind 9) have publicly declared their intention to seek election on May 23 and there are already seven women in the field – outgoing Cllrs Nolan and Sexton, Maura Kilbride-Harkin (the Granard Town Councillor who previously served as a County Councillor), Mary Lillis (an Independent who recently defected from FF), Yvonne Ni Mhurchu (FG), Barbara Smyth (SF) and Niamh Moran (Ind). So in percentage terms there are already a far greater number of female candidates than five years ago – 21% compared to 12%.

Sixteen outgoing councillors (6 in Granard EA and 5 each in Longford and Ballymahon EAs) are seeking re-election.

Mary Lillis (Ind) and John Reilly (SF) are also in the race in this Electoral Area.

There are five outgoing councillors running in Longford EA – Peggy Nolan and John Browne (FG), Paul Connell and Mae Sexton (Ind) and Padraig Loughrey (FF). Longford Town Council member Michael Connellan and Chamber of Commerce President Seamus Butler are also on the FF ticket. Butler was dramatically edged out (677 to 675) in a battle for the final seat in 2009 by party colleague Denis Glennon (who isn’t running on this occasion). Two Longford Town Councillors, Tony Flaherty (formerly FF) and Gerry Warnock will be running as Independents and the field is completed by two women - Gaelscoil Principal Yvonne Ni Mhurchu (FG) and Sinn Fein’s Barbara Smyth (who addressed the party Ard Fheis at the weekend).

The five outgoing councillors in Ballymahon EA Sean Farrell and Colm Murray (FG), Mick Cahill and Tom Victory (FF) and Mark Casey (Ind) will be joined in the race for the six seats on offer by Paul Ross and Gerard Farrell (FG), Pat O’Toole (FF) and Niamh Moran (Ind).

The unknown factor is Labour who haven’t announced any candidates, however, party sources previously stated it is their intention to have representatives in each of the EAs. In ’09,

Labour’s two candidates were Seamus Keaveney (Longford EA) and James Feeney (Ballymahon EA) but they made little impact. Mae Sexton, a Progressive Democrats TD from 2002 to ’07 was elected as an Independent councillor in 2009, but she joined Labour in April 2010 (running unsuccessfully in 2011 general election), before leaving the party in 2012.