‘Beauty to Beast’ shave off for the Samaritans on World Suicide Prevention Day Friday, September 10 in Tarmonbarry 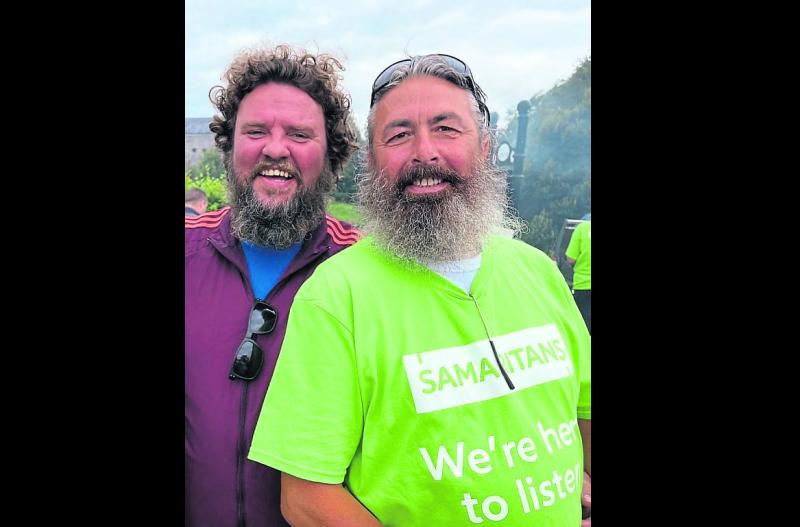 World Suicide Prevention Day is on Friday, September 10 and that is also the date that two Tarmonbarry men, Eddie Coffey and Johnny Rhatigan, will conclude their ‘Beauty to Beast’ fundraiser in aid of the Athlone & Midlands Samaritans.

The pair have refrained from shaving or cutting their hair since December 31 last and after 252 days the bearded and long haired beasts will reappear as beauties during an eagerly anticipated shave off event at the Shannon Bar, Tarmonbarry.

A series of health & wellbeing podcasts have been produced for County Longford, this follows the similar launches in the neighbouring counties of Laois, Offaly & Westmeath.

Eddie and Johnny’s main motivation for undertaking the Beauty to Beast challenge is that it might save just one life and in turn save one family from having to go through the horror of life after a suicide.

Eddie’s wife, Liz (nee Casey), explained that her husband and friend took on Beauty to Beast fundraiser in memory of her late brothers Willie and Paddy Casey and Frankie Lane.

Liz candidly explained, “I was the youngest child of six, and 32 years ago last June, my 15 year old brother, Willie took his own life tearing our family apart and sending us all into a new unknown horror we now called life.

“We did manage a lot of happy years and made happy memories. My wonderful Mum & Dad (Ann & Liam Casey) from Rathowen, Co Westmeath, tried their best to make our lives happy.

“Unfortunately we were hit with the sudden loss of our Dad in 2004 when he went to work driving his lorry one morning never to return, his poor heart had finally given up. Thankfully he was not driving at the time but he had pulled into a layby and we had a small search party looking for him, it was actually with the help of the wonderful broadcaster Gerry Ryan and his staff he was found so quickly as Gerry (RIP) issued a plea live on radio and a passing driver found his lorry."

At the beginning of last year, Liz’s family was hit by tragedy once again.

“But without any doubts our greatest family tragedy unfolded on Sunday January 26, 2020, when the news was broken to us that our second brother (Paddy, Edgeworthstown), my poor mother’s final son, had also taken his life.

“We could not believe that this man who lit up the room when he walked in, the same man who was loved so dearly by his mum, sisters, wife and children and so many wonderful friends had made the choice to make us relive this horror.”

Liz said the idea to organise the fundraiser came about during a lockdown get together.

She said they were with family friends Johnny Rhatigan and Patricia Lane. They had also suffered a tragic loss themselves on January 2, 2020, when Patricia’s wonderful brother Frankie Lane from Derrahaun, Kenagh, sadly decided it was time to leave this world.

Liz revealed, “We were still in our deepest grief. We wanted to do something that would try and stop another family going through the horror of life after suicide. It was hard to come up with an idea that was Covid friendly but with a bit of discussion we decided on the Beauty to Beast.”

Along with her ‘wonderful strong mother’ Ann Casey and her ‘beautiful sisters’ Josephine Casey (Limerick), Kathleen O’Shaughnessy (Legan) and Annemarie Wilson (Rathowen), Liz says that every day they think fondly of their fallen brothers.

“I was only seven years old when Willie passed so I cannot speak from my own memories, but from speaking with my older sister Josephine she tells me he was a gentle soul who never gave cheek and always gave a good energy.

“He was a funny boy but in his own very quiet way, he was kind and very gentle and had a great love for animals, he was very good at school and had so much potential for a bright future, which unfortunately living in rural Ireland in the 1980s he could not see.

“We can only guess his reasons as no note was left and as bad as the mental health system may be now, I’m sure it was not something he would ever have heard of. As a family his cause of death and death in general was not spoken about, he was just gone, it was a taboo subject.”

Liz outlined that her brother Paddy was a fun-loving, kind and caring son, brother, father, husband, nephew, and uncle.

“He was surrounded by so many wonderful friends and seemed to be living his best life. He pretty much always seemed happy and had a laugh that was infectious. He was my rock, my family and his family's rock. You could always depend on him and his pure love.

“It was a complete shock to us all that he decided to leave this world. We had no signs he left no letter and we have no answers.

“I still lay awake some nights thinking about the whys, the lack of answers might be the hardest thing to deal with. You think you know someone inside and out it feels like you have lost the person and the past relationship you had.

“He knew too well what a suicide does to a family as it was in fact him that found Willie 32 years ago and it’s heart-breaking to think where his head must have been at in those final moments to put us all through all this again.”

Liz wished to express a massive thank you to each and every person who supported the Casey family through these tragedies.

“Most importantly I would like to send a massive thank you to the first responders who deal with this on a daily basis but never get the thanks they deserve. The Gardaí and ambulance crew helped us through one of the hardest days of our lives and I need to say thank you.”

Liz concluded, “My one true wish is to get people talking about suicide, to help them understand that the darkness they are currently living in only temporary that there is help out there and that so many more people care about them that they will ever know, everything can be changed with a little help.

“We hope that by our efforts, maybe some extra money will be raised for our local Samaritans, but more importantly to help show someone who is currently in turmoil that there is help available, that they are loved and life is worth living.”

You can follow the progress of the Beauty to Beast fundraiser on Facebook @beautytobeast2021 and can make a donation via https://www.idonate.ie/Beautytobeast.

Athlone and Midland Samaritans have been providing emotional support to anyone experiencing feelings of distress or despair since it opened its doors in 1992. It has over 80 volunteers who come from all walks of life and who commit to keeping the helpline available 24 hours a day, 7 days a week.We can be reached by calling Freephone number 116 123 or by email jo@samaritans.org. You can also visit our centre at 3, Court Devenish, Athlone 2pm - 10pm Monday to Saturday.