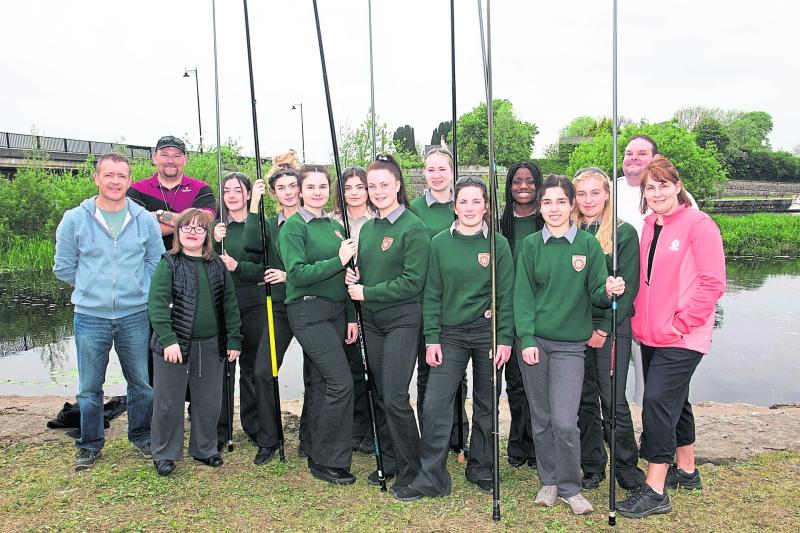 TY students from Lanesboro Community college gathered at the Lanesboro Angling Hub in Ballyleague/Lanesboro on Thursday, May 16.

The students were invited to take part in a young anglers workshop, provided by some of the members of the local Lanesboro Angling Hub.

Chaperoned by their teacher Fergal McElgunn, the students soaked up as much knowledge as they possibly could, on what was a gloriously sunny day.

Under the watchful eye of Andy Burnett, Chairman of Lanesboro Angling Hub, and Philip Gordon, Hub secretary, the students caught fish in huge numbers, learning all they could about angling, the environment and the benefits of angling as a hobby to a person’s mental health wellbeing.

Hub secretary Philip Gordon said events like these are vitally important to the future of angling.

“This exercise was organised to bring the kids down and give them an introduction into angling in the area and it was a great day, they are catching plenty of fish. On top of the angling, we teach them to be respectful and to respect their surroundings.”

This was not the first young anglers fishing course hosted by the team at the hub either, with other TY students from LCC also having their own day out in recent times.

Philip warned that with kids now more interested in technology than the outdoors, events like these are vitally important.

“Times have changed. I have three young kids myself and their mental stimulation comes from technology now generally.

“It doesn’t matter the size of the fish or if they catch or not, it is all about getting them down and onto the bank to relax, have a good time and see what nature has to offer.

“They are the next generation. We have lost a couple of generations as it is to technology and if we don’t educate the children and show them how to fish, there will be more. Angling is a great stress buster. If you have got any problems going on in your life, get a couple of hours on the bank and it’ll definitely help you out.”

Philip warned that a more pressing concern for the Lanesboro Angling hub, is the chronic lack of maintenance of the facilities in the area.

He warned, “We have several serious issues here on the hot stretch. On the south side of the river you can see weed growth the whole way across and it is unfishable. We will get about two weeks out of a small stretch before it dissipates completely. The water levels will go down and it is infested with Asian clam.

“The Asian clams purify the water by feeding on microbes and that allows sunlight to get to the bottom of the river and weeds to grow. They also excrete a huge amount of nitrates.”
Club chair Andy Burnett also confirmed that they have a problem with siltation and poaching.

He said, “We have a lot of problems with people poaching and taking fish away at night, but the fisheries board are doing all they can. Weed growth is becoming more prolific all of the time. The clams are still there but nobody is coming up with any solution.

“Year on year the water is getting more shallow, which is less friendly for fish habitats. If there is no habitat for the fish, they just won’t come in and then this place is lost as a fishery, which is a crying shame. Once it’s gone it’s gone.” he warned.

Philip Gordon says they have been in conversation with Waterways Ireland, Inland Fisheries Ireland, the EPA, the ESB, Parks & Wildlife and Minister Boxer Moran, over the issues, but have been left waiting five years to see any updates or developments.

“Minister Boxer Moran has promised us the sun, moon and stars as well, but they have reneged on everything so far and they have let us down badly again this year.”

Philip says they met with Boxer Moran in November of last year, who promised they would sit down together with all five agencies to make a plan going forward.

“It’s now May, I rang Boxer’s office last week and there is still no sign of that meeting. It’s another year gone.

“A couple of more years and this stretch will be gone. We will lose it and that will be it.

“This was once a renowned fishery in Europe and unfortunately if we don’t act very, very quickly, this is gone.” he concluded.