One of Ireland’s oldest fairs returns to Longford 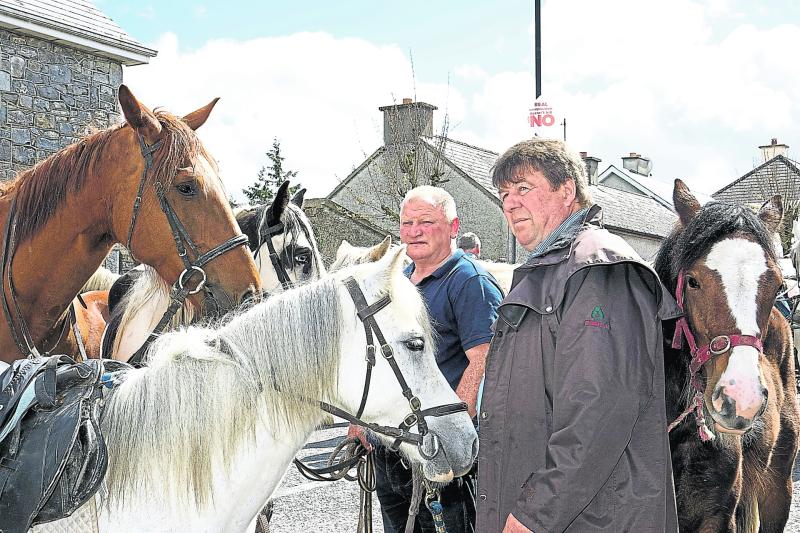 Brendan McGirl and John Whyte at the 2018 Lanesboro Horse Fair

One of the country’s oldest surviving fairs, The Lanesboro Horse Fair, is due to kick off in Longford this Saturday, May 11, in what promises to be an excellent day out for all.

The event dates back to 1615, when it is thought the first ever fair was held. This year sees the fair making its way back to the main street in Lanesboro for yet another installment and organisers say this gives the event a more traditional feel.

“This is its third year it is back on the main street.” Committee chair Gerald Farrell told the Leader.

“We close off a section of the main street, fencing it off with barriers. It is safe for people to walk outside and the horses are kept inside, which really adds to the atmosphere in the town.”

Although the horse fair took a thirty year break in the late 1960’s, the community of Lanesboro rallied together to revive it in 1999. The first re-enactment took place in 2000 and it has now taken place every year since.

Upon the retirement of the committee behind the revival approximately four years ago, a new committee was formed and spearheaded by Cllr Farrell.

“We didn’t want to let the horse fair go, so we formed our own small committee and we organised the fair.”

Cllr Farrell added, “We have held it for the past four years under this committee and it has been very strong for them four years. It is a great addition to the town.”

Described as a wonderful day out, the event will cater for those who have a genuine grá for horses, the sales and purchases of said horses, whilst there will be an award on the day for the best horse of the fair.

The dog show did not take place this year, however, though the committee have promised that they will be looking to reintroduce the dog show next year.

Cllr Farrell urged locals to show their support to what is a long standing tradition for the people of Lanesboro.

“It is a long standing tradition in Lanesboro and we want to try and keep it going."