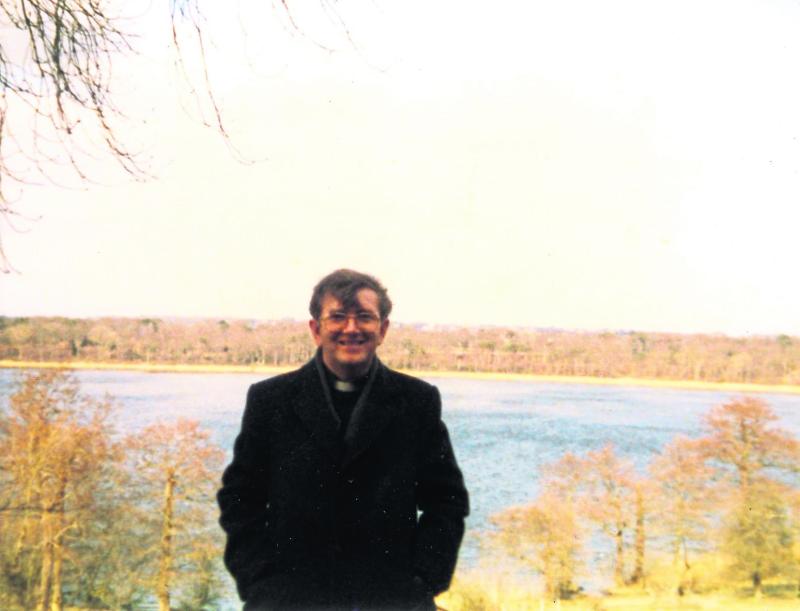 A number of months after his death, Fr Jim Farrell is still at the top of the minds of his family, friends, and those who worshipped in this parish.

The Requiem Mass for Fr Jim Farrell was celebrated at St Bede's Church, Weaverham on  May 30, 2018, following his death at Phoenix House Care Home, Deeside, on May 19. This was Jim's last parish before ill health forced him to take early retirement in 2012. Parishioners from some of his former parishes joined with St Bede's parishioners and clergy from across the diocese at the concelebrated Requiem Mass for him led by Bishop Mark.

Jim was born in Lehery, Lanesborough Co Longford, Ireland in 1945, the eldest of three children, his siblings being his brother Michael and sister Mary. Following his early education, he began his studies for the priesthood at St Kieran's College, Kilkenny and was ordained for the Shrewsbury diocese in 1969 and went on to serve in his first parish – St Joseph's Birkenhead. I succeeded him at St Joseph's following my own ordination in 1979.

He then spent two years at St Winefride's Neston before taking up his first appointment as parish priest at All Saints, Ashton-on-Mersey, followed by St Mary's Middlewich. After a period away from active priestly ministry, he was appointed parish priest of Sacred Heart, Cheadle Heath, followed by Our Lady of Fatima, Barnton, before taking up his final appointment at St Bede's Weaverham.

Jim was quiet by nature and liked to get on with his priestly work in the various parishes in which he served. He will be remembered with affection for his quiet, gentle manner, helping people come to know God's love for them.
He was a good listener and made himself available to anyone who approached him with a problem. I have been told that anyone who sought his help was given his undivided attention. He was also devoted to the care of the sick – he regularly visited sick parishioners, particularly those who were terminally ill, and he was also known for visiting those in hospital a long distance away.

An important part of the priest's role is to build up the life of the parish community, something Fr Jim sought to do in the parishes in which he served. He also cared about the younger Catholic generation and was particularly concerned that they should grow in their faith and for that reason he would visit the local Catholic schools to celebrate Mass and the Sacrament of Reconciliation.

There is no doubt that Jim was a dedicated priest who also managed to find time for some relaxation. In his leisure time he liked to read, listen to music and go walking. Sadly, ill health meant retirement from active ministry in 2012 and he moved to Connah's Quay where he was looked after by his sister Mary. I visited him at his home there a number of times and, when he could no longer be cared for at home, he moved into Phoenix House where he was well looked after by the staff there. I also saw him in the home; the last time was just two weeks before he died.

I was able to give him the sacraments of the church and his sister was also present and joined in with the prayers. I recall it was a lovely sunny Sunday afternoon and, just a fortnight later, Fr Jim slipped away quietly and peacefully from this world with his family at his bedside.

Following the Requiem Mass, his body was repatriated to Ireland and interred in his parents' grave in Rathcline cemetery, Lanesborough, Co Longford. May he rest in peace.