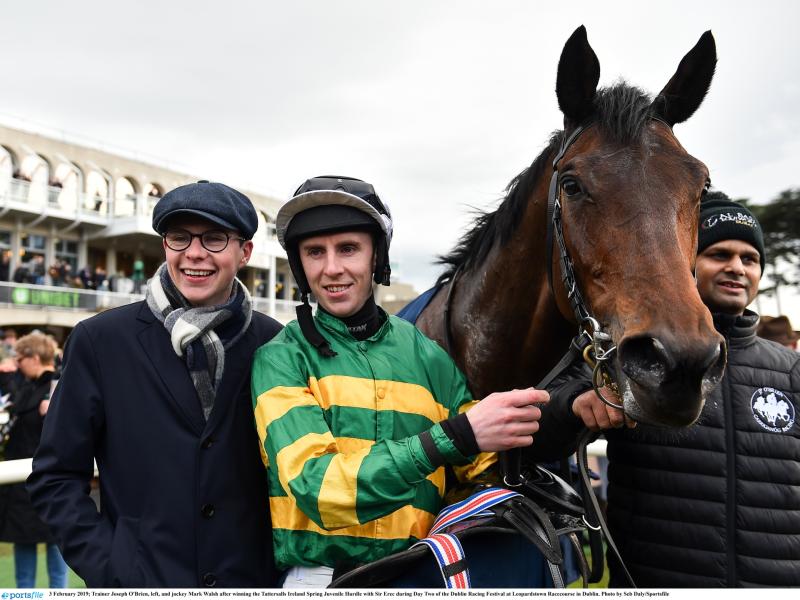 Joseph O’Brien was born into a family of exceptional racing pedigree. But he is now building a legacy of his own in Kilkenny.

Joseph is the head trainer of Carriganóg Racing in Owning Hill, a venue synonymous with his family. Joseph's grandfather Joe Crowley, and his parents Anne-Marie and Aidan all trained their share of elite racers there. Joseph is now there adding his chapter to the success story that his family has written so far.

Joseph never took his environment for granted. It is evident when you speak to him that he is grateful for the opportunities that he has gotten. And by god did he take them.

Those initial chances came on the saddle, he was apprenticed to his father and five days after his 16 birthday came the first of what would be a long line of successes. Joseph’s first win came at Leopardstown when he brought Johann Zoffany home ahead of the chasing pack.

“It was a special day, to ride your first winner at a track like Leopardstown for any apprentice is a great day and it was no different for me,” Joseph described.

It would be easy for a lesser man to get carried away or crumble under the weight of scrutiny that has been on Joseph for most of his life. The man himself credits family support and tuning out the noise but his own diligence and humility have played an enormous role in turning opportunities into triumphs.

“I was always lucky that I had a great team of people around me and a family that were always there to support me.

"Obviously there are pressures when you are riding for your dad and especially for an operation like Coolmore but I was lucky to be in the position that I was and be able to ride the animals that I did,” Joseph explained.

He has his own thoughts on staying grounded and they don't steer towards anything that he has done personally but rather the nature of the sport he is operating in.

“One day I might be lucky enough to win and another day you won't be. This game is a great leveller and if anyone gets too far ahead of themselves they would get brought back down to earth fairly quickly,” Joseph said.

“I just tried to do the best I could with the great opportunities that I got. That is all anyone can do. You get compliments from some and other people say they think you could do better. But you always just deal with both as they come and try to focus on what you’re doing and whatever happens from there happens.”

“The record had been written about a little at the time before Navan so I was aware that I was approaching it. There is a certain amount of pressure when you are heading for something like that and at the time it was a relief to get it out of the way,” Joseph explained.

“It was a fantastic record to get for a little while and it was very special to see the list of Champion jockeys that had gone before me in Ireland. To see Colin (Keane) go beat it and do what he has done is great. He is a top rider and top fella, it is a huge achievement and one I know I was proud of.”

As has been established, there are many wins to account for in his five years as the lead jockey for his father at Ballydoyle. But one of the biggest of all was the pair making history in 2012 as the first father-son, trainer-jockey combination to win the Irish and Epsom Derby, with Camelot.

“It was of course a special day and I feel lucky to have an association with a horse like him. It’s something all of us will always look back on fondly,” Joseph smiled.

But if you ask Joseph himself what victory was the most special to him it’s a different family combination that comes to mind and one that takes him out of the saddle.

“Latrobe winning the Irish Derby in 2018 was brilliant for me and for my brother Donnacha to ride a Derby winner for me at The Curragh. That is a day that wont be easily topped at any stage,” Joseph said.

Just like a former player that turns his hand to management, they soon realise that it is a lot more nerve wracking on the sideline when the outcome is out of your hands. But is it the same from jockey to trainer when you have to pass over the reins to someone else?

“It is. It is and you are passing over that control. But that’s the job that we are in now but we have a great team of horses and riders. It is a great time of year now with a couple of jumping festivals and the flat season getting into full swing. We are excited,” Joseph said.

It is definitely the job he is in now and standing at 6ft tall and trying to make the nine stone weight flat racing jockey limit it was a job Joseph knew was coming sooner rather than later. And in 2016 he decided to officially call it a day on race riding and focus on his training career.

“It wasn't that hard to be honest (to stop riding), I didn't have a huge amount of time left and obviously my weight was creeping up over the previous years so it was a decision that was sort of made for me. But I was looking forward to the new challenge of training and it was always something I had been excited to do,” Joseph described.

There is obviously a great deal of reflection possible when you achieve so much success but for someone like Joseph O’Brien at 28 years old the only way he is facing is forward. The future is bright for Carriganóg Racing and its head trainer as the stable shifts its focus towards the biggest prizes in flat racing.

“That was something that was spoken about a good few months ago. Our flat numbers have been expanding a little bit and we haven't had as many runners in the jumps in recent years so that's the direction our operation is going,” Joseph explained.
I concluded this interview with a question more in jest than because of any expectation of a different answer. I asked Joseph if he ever considered doing anything outside of racing.

“No, I can't say it ever crossed my mind,” he said, accompanied with a laugh.