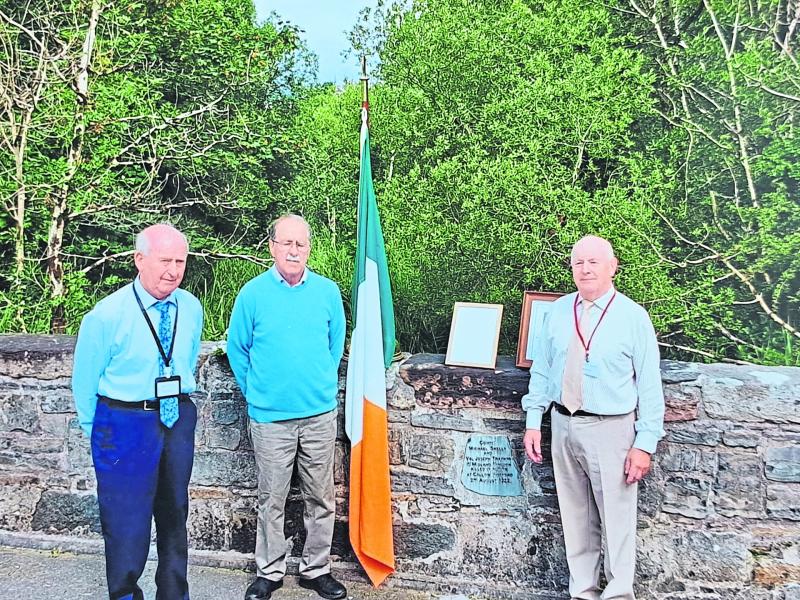 A tragic event occurred at Callow, Co Mayo on August 2, 1922, which resulted in the death of two soldiers of the Free State Army.

The police barracks in Swinford, now part of the Gateway Hotel, had been occupied by soldiers of the national army when it came under attack by anti-treaty forces.

A company of reinforcements en route from Ballina was ambushed at Callow and their commanding officer, Lt Comdt Michael Skelly from Clonmore, Killashee, Co Longford and Vol. Joseph Traynor from Tempo, Co Fermanagh, were shot and killed. Comdt Skelly was aged 23 and Vol. Traynor was just 20.

On August 14 last, Fr John Durkin celebrated a Mass of Remembrance in St Thomas’ Church, Callow for all those involved in the War of Independence and the Civil War. Some of Comdt Skelly’s relatives travelled from Donegal and from Longford for the Mass. There are no known relatives of Vol. Traynor.

Locals provided refreshments after the Mass and then the group visited the site of the ambush, located about a mile west of the church, where a plaque had been inserted in the parapet of a bridge to commemorate the two men.

Ernie Skelly, nephew of Michael Skelly laid a wreath at the plaque while Gerry O’Sullivan, a well known piper from New York who has Killasser roots, played some airs.

It was a fitting ceremony which remembered all involved at that turbulent time, all of them no doubt believing that they were serving the best interests of their country.