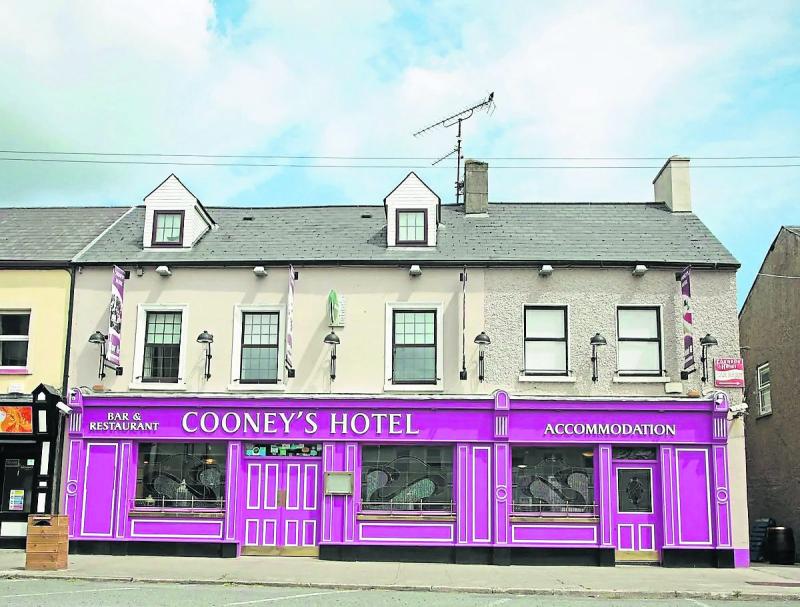 Cooney's Hotel in Ballymahon has been put up for sale

The owner of a leading south Longford based hotel has told of how a yearning to enjoy an active and healthy retirement led to his decision to sell up after more than a decade and a half at the helm.

Mike Cooney said there was no hidden secret as to his rationale to step away from a family run business he and his wife Josephine have dedicated their last 16 years to.

The local businessman dismissed suggestions the move was in any way linked to extraordinary energy price hikes which has seen some businesses being forced to make a choice between cutting production, reducing staff numbers or ceasing trade altogether.

Rather, Mike said footfall levels couldn’t be in better shape with major expansion plans also in place to add an 800 seat function room and 50 additional bedrooms to its existing premises.

“We are doing twice as much business now as we would have pre Covid,” he said.

“The food side (of the business) is extremely busy and the accommodation is full all the time.

“We added an al fresco outdoor heated dining area with a retractable roof during Covid as well. It’s just such a huge commitment, it’s 24/7 and the way we like to run a personal service, people want to see the owner.”

The Cooney’s have remained an almost indelible fixture on the local commercial landscape for over 40 years having previously owned and later sold the town’s former Londis store to SuperValu in 2003.

“We bought Kenny’s Bar and the house next door to it and answered a void that was there in the town,” he said.“There was no hotel, function room, no meeting room, no nightclub and we filled that niche in one fell swoop.”

Mike said the onset of the pandemic and return to more conventional, everyday life had caused him to take stock of life.

A teenager charged with assaulting three gardaí, leaving one with a suspected broken nose, during a violent altercation inside Longford garda station has pleaded guilty to all charges before the court.

“Covid, I suppose, made everybody reassess their lives and it just put things into perspective,” he said, while referencing a line from Kenny Roger’s famous 1978 hit ‘The Gambler’ to reinforce his point of view.

“The business is booming, but we are at retirement age, we have worked all our lives and it’s really a case of knowing when to hold them and when to fold them.”