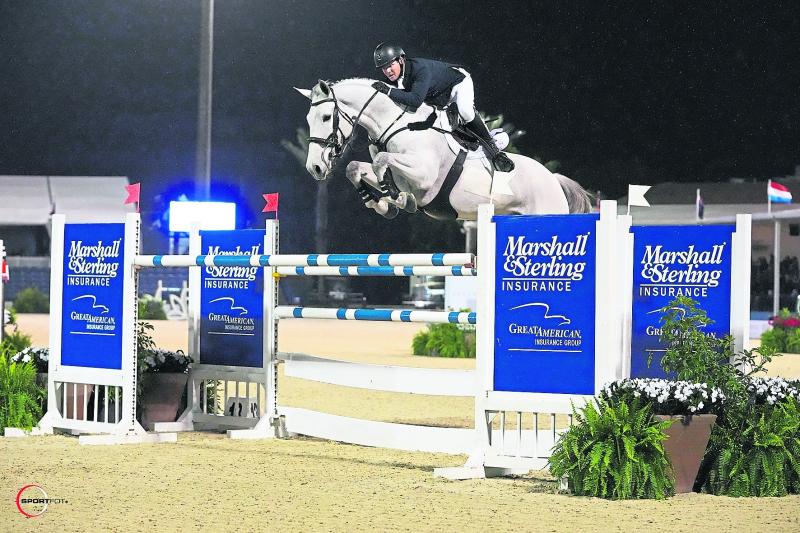 Two county Longford women will be watching Friday’s Aga Khan Nations Cup in the RDS with even greater interest than normal.

Sisters Mary Gannon and Anne Gannon Clancy, from Whiterock in Longford, will be cheering on Ireland from the stand, but one horse in particular will have them on the edge of their seats.

When renowned show jumping star Shane Sweetnam enters the ring on the majestic James Kann Cruz it will be the culmination of an extraordinary year for a horse now regarded as one of the best in the world.

Less than 12 months ago, Mary and Anne took the difficult decision to sell James Kann Cruz to Sweetnam after eight years working with him, during which time the horse’s potential became more and more apparent with each passing season on the circuit.

The sisters reluctantly parted company last September in order to allow him to continue to reach his full potential.

Just a year later James Kann Cruz is the number one ranked nine-year-old in the world and will now represent Ireland at the showpiece of the Dublin Horse Show week in one of the most iconic jumping events on the calendar. It has been some journey.

James Kann Cruz was bred in Galway by Patrick Connolly and bought as a foal at six or seven months by the sisters after he caught their eye on a visit to the stud.

They remember that their father Michael was particularly taken by the colt, who his breeder has described as been “very athletic with a great gallop”. Having initially planned to buy another foal, they were so struck by James Kann Cruz that they changed their minds. And what a decision that was.

Over the next eight years they carefully managed his career, and James Kann Cruz had the benefit of being ridden and encouraged by first John Mulligan and then international rider Francis Connors.

“I have to say that he is probably the best horse I have had in my career,” said Connors in a recent interview. “I’ve ridden a lot of good horses, taken part in team events, but James Kann Cruz is probably the biggest jumper I’ve had.”

As James Kann Cruz racked up the victories, winning Grands Prix at National and then Premiere level, rider and owners felt that he was ready for bigger things. Sweetnam was among those to show interest, and when he came and rode James Kann Cruz his mind was made up after just two jumps.

The speed of this extraordinary horse’s rise to the top has caught the show jumping world by storm, even if his owners always knew they had something special on their hands.

He burst onto the scene at the Nations Cups in Rotterdam and Vancouver, with a combined four clear rounds. So, in Nations Cups, James Kann Cruz has never knocked a fence – the only blemish being one time fault. No wonder he is being talked about as a superstar.

“Right from the start, James Kann Cruz stood out,” says Mary Gannon, who runs a dental practice on Earl Street. Her sister Anne has a pharmacy business, also on Earl Street.

“Dad really wanted us to buy him the minute we saw him. He has a very good eye. We had eight great years with him. He gave us some great days out, at Dublin Horse Show and elsewhere.

“We are all so proud of him now, and it was lovely for us to have owned him and helped play some part – along with John and Francis who produced him brilliantly – in his success. It will be amazing now to see him representing Ireland. We can’t wait to see him on his ‘home’ patch in Dublin after what he has done already this year.”

And the sisters will be hoping that lightning can strike twice – as they have now purchased a sister of James Kann Cruz at the Goresbridge Sales!