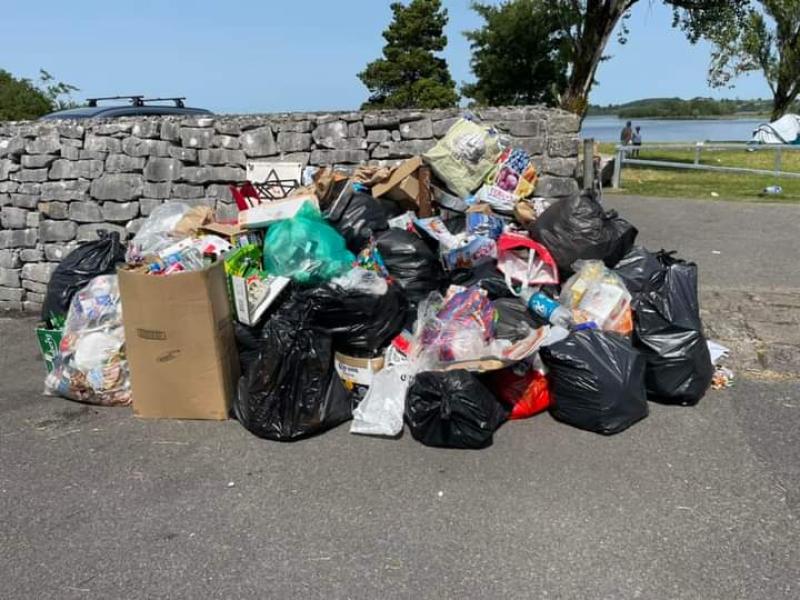 This was the unseemly sight locals from the south Longford village of Newtowncashel awoke to last week as one of the county's most scenic hotspots succumbed to the latest episode of illegal dumping.

Up to 20 bags of rubbish , plastic bottles and other household waste were found strewn across the ground at Newtowncashel's picturesque Barley Harbour.

Its remnants, which is believed to have stemmed from a weekend of camping, sparked a vociferous outcry from locals.
Cllr Mark Casey branded the discovery as nothing short of “disgraceful”, saying the incident was not the first time Barley Harbour has fallen foul to illegal dumping.

“A lot of the problems down there is from people out camping and simply not bringing their rubbish with them,” he said.

The Independent local representative revealed how council staff erected barriers and placed stones at the harbour's entrance several months ago to try and deter episodes like last week's from becoming a regular occurrence.

The issue, which is believed to also centre on a lingering ownership wrangle between the council and a third party, is expected to dominate proceedings at the next Ballymahon Municipal District meeting when it returns from its summer recess in September.

“Stones were put in there but it hasn't added any value to the area or addressed the problem,” he said.

His fellow Lanesboro local authority counterpart Cllr Gerard Farrell said the dilemma was one he had been working on for some time.

“There is €50,000 to be spent there and while there is no quick or easy fix, if we can get the ownership side of things sorted out that would be a big help,” he said.

The Fine Gael councillor said the almost weekly headache of large convoys of camping vans descending on the locality was already stymying a handful of local sporting and recreational groups from accessing the facility.

“It is widely used with people coming down from Dublin, but then there are locals that can't even launch a boat,” he said.

Cllr Farrell added that once clarity over ownership rights to the harbour are thrashed out, the likelihood of installing public bin facilities and even bye-laws might need to be considered in a bid to resolve the issue “once and for all”.