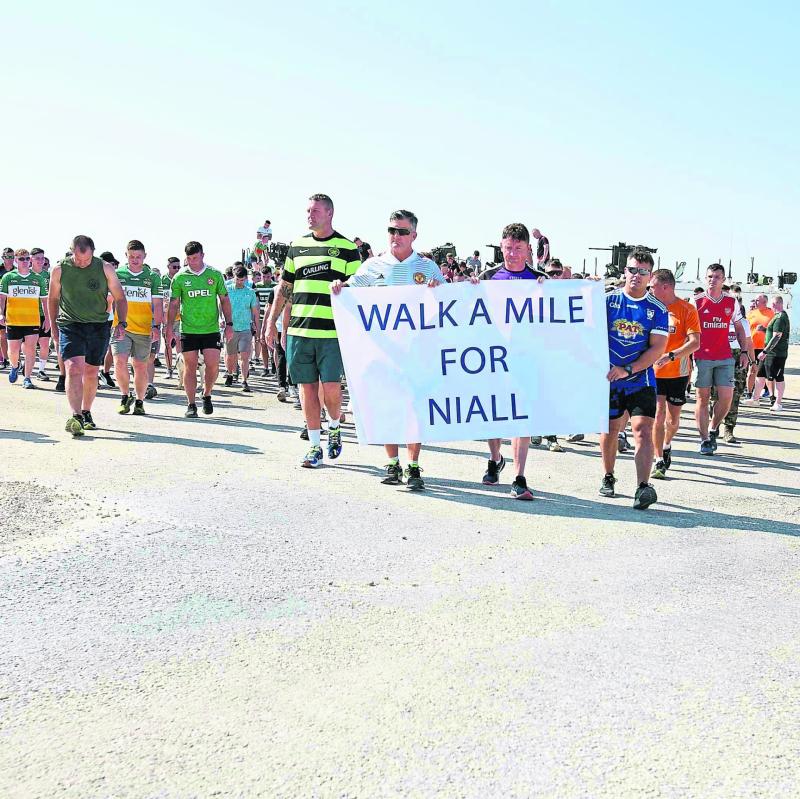 Members of the Defence Forces in BN 120, Lebanon walking a mile in memory of Niall O'Hara

The parents of a young north Longford man who tragically took his own life over three years ago have spoken of their hope at how a charity fundraiser which amassed almost €50,000 will help raise awareness and foster a wider debate on mental health.

John and Johanna O’Hara were reacting this week to the recently held and aptly named ‘Walk a Mile in Memory of Niall’ that garnered over €47,500 for suicide support charities Youth Suicide Prevention Ireland (YSPI) and Healing Untold Grief Groups (HUGG).

It was an appeal which brought with it as much ebullience as it did unbridled emotion as Longford folk turned out in their droves to remember the much loved and ultra talented Granard youngster.

The 20-year-old Maynooth student’s tragic passing in March 2019 cast a deep shadow over a community he and his family have become synonymous with and a parish which over seven action packed and gruelling days covered some 150km of ground in his memory.

“It has been very difficult to put into words what our ‘Walk in memory of our beloved Niall’, has meant to us as a family,” said Johanna.

“Sometimes words don’t seem adequate. Some things in life must be felt. Some things must be experienced and our walk was no exception to that.”

Moving words they may be, they are sentiments which illustrate the inescapable level of unselfishness and benevolence communities like Granard can exude in times of unquantifiable grief.

A perfect example of that could, perhaps, be best summed up in how a GoFundMe campaign which had initially been designed to raise €3,000 is now touching the €48,000 mark.

“It was an opportunity to reconnect,” added Johanna.

“It was so emotional with lots of tears – tears of sadness but also many, many tears of joy. It was everything that covid wasn’t, human connection and big warm hugs.”

Many of those embraces Johanna alluded to are very much fresh in the memory, just over a week on from the culmination of a walk the O’Hara family are still coming to terms with.

From the family home in Muckerstaff to Maynooth where Niall was a well respected student for three years, no fewer than 20 different landmarks were bypassed on a journey that climaxed with a special mass at St Mary’s Church in Granard last Saturday week (July 2).

Both Johanna and John told of how they had been left dumbfounded at the “amazing asset” Longford’s greenway had provided in making the event such a memorable occasion.

A warm, friendly and obliging couple, Johanna and John are everything and more that would expect from loving and devoted parents.

The pair, you get the distinct impression, were not just patiently waiting for Niall’s memorial fundraiser to arrive, but were overawed at the sheer level of goodwill when it eventually did.

“It is impossible for us this side of heaven to fully understand our present situation, but what we do know for certain is that Niall, loved his family, his friends, St Mary’s GAA, and the time he spent at Maynooth University,” said John.

“We had the support of all those people that Niall loved on our journey but also so much more. Our entire community and beyond came out and joined us. So many people travelled long distances to be with us. Strangers met us and embraced us along the way like we were old friends.

“Family and friends of Niall’s joined us from all over the world, doing their own walks in New York, California, San Diego, Vancouver, New Zealand, Australia, and Lebanon. The entire journey was filled with so much genuine love.

“Feeling the connection of so many amazing people made the entire walk so incredibly special. Every step was filled with love and a huge sense of community spirit.”

It’s a feeling which has unsurprisingly raised the prospect of whether the fundraiser could become an annual event.

And while Johanna said replicating the success of Niall’s inaugural memorial would be easier said than done, the chance of holding a more localised walk in the future remains a possibility that has yet to be fully explored.

For now though, the O’Hara’s are just focusing on the positives, the unwavering decency that can exist in humanity and the five figure sums which will enable two of Ireland’s leading suicide support groups erase the stigma around a topic which, for too long, has ignored rather than challenged.

“The huge amount of money so generously donated to our charities www.hugg.ie and www.yspi.ie will allow them the opportunity to reach out and help so many more people,” said Johanna.

“That money is going to make an enormous difference to the lives of others. We as a family found a sense of peace and experienced a joy that we thought would never be possible again.

“We are so very grateful to the many people that made that happen for us.

“There are way too many to thank individually right now but over the coming months we will try our absolute best to do just that.”