The Minister was welcomed by Councillor Paraic Brady, Cathaoirleach of Granard MD who also paid tribute to the work achieved in Lus na Gréine FRC through Healthy Ireland funding and to the many families and individuals that took part. 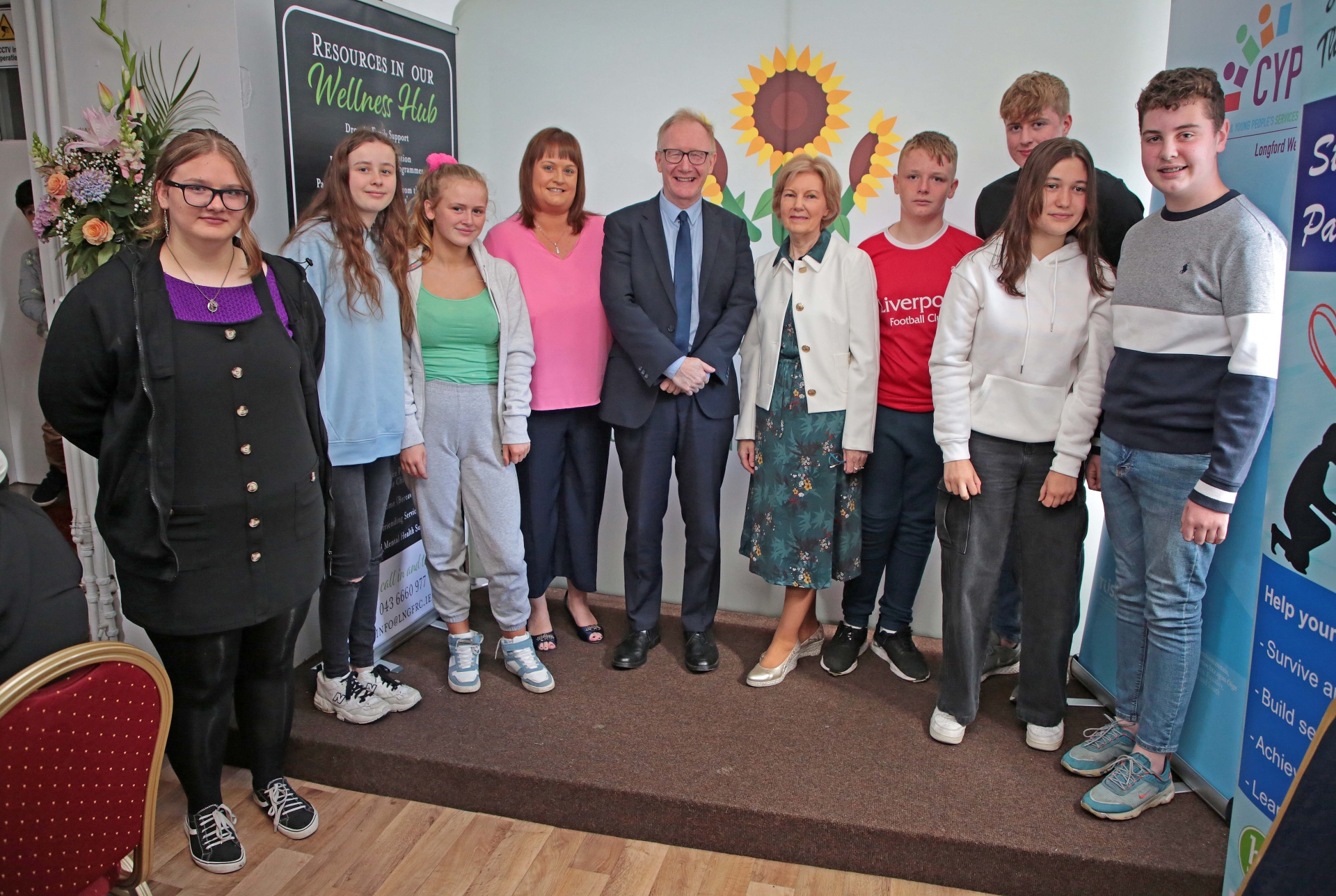 Councillor Brady, on his own behalf and that of Cllr Turlough McGovern and Cllr Garry Murtagh who were present, addressed the need for further financial support for the FRC’s Phase 2 of its premises currently under refurbishment. This he said will provide a fantastic resource for families and meet the needs of people in North Longford for many decades to come.

Speaking on behalf of the FRC Thomas Pettit welcomed the Minister and paid tribute to him in his role for supporting the funding of community led health initiatives.

Eileen Finan Project Manager of the FRC also paid tribute to the Minister and his Department for their foresight and support in funding positive health projects such as the Family Wellness programme, the training of Youth Health Ambassadors ‘Our Voice Our Wellbeing’ across Longford and Westmeath as well as Community Health prevention to address childhood adversity, training of facilitators in the Start from the Heart Programme as well as suicide prevention and stress reduction strategies.

Eileen thanked the LWCYPSC and their partners Bridgeways, Cara Phort and Athlone FRCs as well as Comhairle na nÓg in both Longford and Westmeath, Foróige, Longford and Youth Work Ireland Westmeath all of whom were partners at the forefront of programme delivery. She also thanked Longford County Council for their support with HIF funding for the centre in the delivery of trauma-based parenting supports.

She acknowledged very much the support of Longford Westmeath HSE Health Promotion & Improvement team in their valuable work in creating awareness and delivering programmes to support positive wellbeing across the life course.

Minister Feighan paid tribute to all involved in rolling out HIF Round 3 projects and congratulated all the families and young people who took part. He said the evidence from the projects underpinned the value of Healthy Ireland funding to local communities whom he said are very aware of the unique needs within their own localities.

He praised the work of the many Family Resource Centres across Ireland whom he said had good governance procedures and could measure results as they were very much in touch with people on the ground. He stated that the primary aim of the Healthy Ireland funding is to provide support for innovative, cross-sectoral, evidence-based projects and initiatives that support the implementation of key national policies in areas such as nutrition, obesity, smoking, alcohol reduction, addiction, physical activity, sexual health and positive mental health wellbeing.

The Minister said he was delighted to see so many young people in the FRC and he praised the work of the LW CYPSC in upskilling and giving a voice to Youth Health Ambassadors who will support the roll out of the committees’ goals and vision. He also acknowledged the great work of Longford County Council in the realm of health promotion and in administering Healthy Ireland Funding. He noted the support received by Lus na Gréine FRC in running parenting programmes to redress the impact of childhood adversity impacting families.

The Minister also paid tribute to the work of The Hill Community Creche and the important role they play in supporting babies and primary school children both with creche and afterschool services. He noted his pleasure that the Hill Creche was a key partner with Lus na Greine FRC in the provision of after school services and pledged the Government’s support for phase 2 of the FRC’s new development on Main Street.

Grainne Reid LWCYPSC Coordinator also complemented the work of the Department of Health and thanked the Minister for his support in the promotion of health and wellbeing to local communities. She said the results were tangible and had brought about significant improvement in the lives of families and communities across both Longford and Westmeath.

The Minister took time to talk to families and listen to their concerns. He met with residents from Colmcille Terrace and pledged his support for the speedy refurbishment of the Terrace. He also thanked the local Gardai for their work in crime prevention and in contributing to the safety and wellbeing of the community across the county.