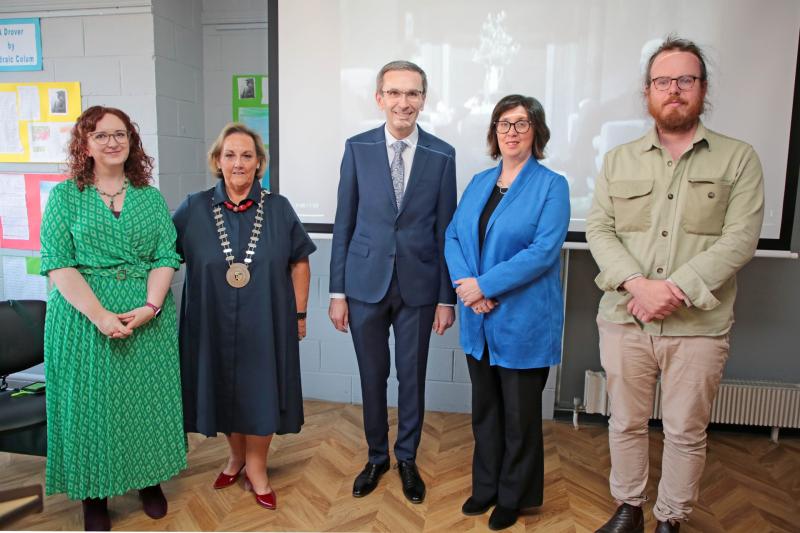 There was great interest in this year’s Padraic Colum Gathering, which was held on May 13-14.

Making a welcome return following the lifting of COVID-19 restrictions, the programme consisted of a range of events, all celebrating the life and work of one of Longford’s great writers.

The Gathering is run by Longford County Library, Heritage and Archives Services and this was its fifth year.

In addition to in-person attendees, members of the Colum family joined online from Britain and Australia.

The Gathering got underway in Longford Library on Friday evening, with Longford County Council Cathaoirleach, Cllr Peggy Nolan, performing the official opening. She spoke of her pride in Colum’s Longford origins.

Acclaimed writer, John Connell, read some of Colum’s poetry, and had some personal reflections on it.

National School in Longford. Padraic Colum attended the school and, in the run-up to the Gathering, pupils in fourth, fifth and sixth classes did projects about him.

Talented singer and musician, Sarah Haughey, a Transition Year student in the Mercy Secondary School, Ballymahon, sang at the opening event. She gave beautiful renditions of ‘She Moved Through the Fair’ and ‘My Belfast Love’.

Cllr Seamus Butler, a member of the Padraic Colum Gathering Committee, wrapped-up Friday’s programme by thanking all involved in the Gathering. Cllr Butler has a long-standing interest in Colum and was instrumental in establishing the event.

Aidan O’Hara opened proceedings on Saturday morning, in Granard Community Library, with readings from Colum’s book My Irish Year. He was followed by Professor Bairbre Ní Fhloinn (University College Dublin), who gave a fascinating lecture on ‘Padraic Colum and the Oral Tradition’. In it, she referred to some of the great storytellers in Longford and the kinds of stories that Colum probably heard as a child.

The last lecture of the Gathering was given by Méabh Ní Choileáin, a doctoral candidate in Trinity College Dublin. Her subject, ‘Padraic Colum: An Irish Voice in American Children’s Literature’, was an important reminder that much of Colum’s work was intended for an American audience.

The Gathering ended with a bus tour of Colum’s north Longford, guided by Colmcille man and local historian, Seán Ó Súilleabháin. Many of the attendees are already looking forward to the 2023 programme!