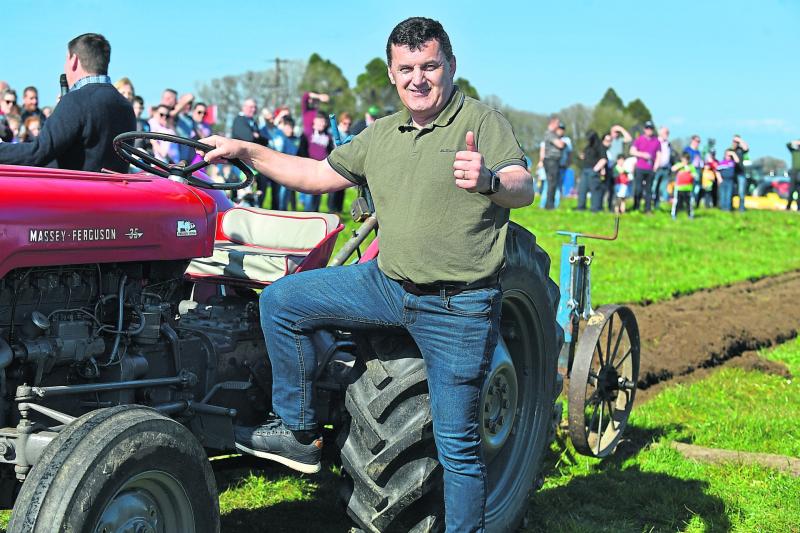 Blessed with glorious sunshine, the spirit of the County Longford Ploughing Championships flourished again on Sunday after a frustrating break of three years.

Patrons and families who flocked to the farm of John & Helen Kiernan at Carragh, Granard, in their droves, enjoyed a fabulous day out.

Longford Ploughing Association Chairperson Cynthia Geelan Cruise extended a special thank you to the main sponsor Raymond Farrell of Robinstown Haulage and all sponsors who got behind them in their endeavours.

“We had over 50 competitors on the ploughing plots from Armagh, Donegal, Tipperary, Wicklow and everywhere in between,” she explained.

During the opening ceremony, Cynthia praised the organising committee for their trojan efforts and spoke of how wonderful it was to be back out in the sunshine and fresh air, conversing with people, some for the first time since the last county ploughing in 2019.

She poignantly remembered those that have passed away in the intervening time, among them great ploughing enthusiasts Eugene McGerr, Bertie Mills and Paddy Finnegan, and a minute’s silence was observed.

In welcoming the large crowds to Carragh, Fr Michael Campbell reminded them there were actually in the parish of Abbeylara and it was the first occasion the county ploughing came to the parish.

He praised the generosity of the host family, John and Helen Kiernan, and said ‘our thoughts with the people of the Ukraine and around the world who are unable to plant seed’ and enjoy occasions such as the ploughing.

Cllr PJ Reilly spoke of his pride at seeing the ploughing championships take place in the parish of Abbeylara, and local comedian Jimmy Jests (aka Jimmy Jests) provided a few laughs to set everyone on their way.

At the ploughing arena, Edgeworthstown’s Sean Monaghan won the Longford Senior ploughing title with 117 marks. Anthony Reynolds was a close second on 115 marks.

The best visiting competitor was Dennis Dunne, from Rathangan in Kildare on 113 marks, followed by Christy Carton, Kilbeggan on 112 marks.

Sinead Monaghan retained her title as Queen of the Plough and Daniel Haughey was U21 champion once again.

Luke added, “We had competitors from Donegal, Cavan, Leitrim, Roscommon, Sligo and Westmeath in the loy competitions.

“We congratulate all our ploughing competitors on their efforts at our contest in the first match ever held in the ancient parish of Abbeylara.”

Farmer Phil, Stuart Moyles, Declan @I Do Agri and Jimmy Jests were a major hit and there was a thumbs up for their captivating performances as celebrity ploughing stars. From ploughing to tractor balancing attempts and penalty shots, a multitude gathered round them and followed every move.

There were lots of compliments for all the local performers who entertained visitors to the site throughout the afternoon with music, song and dancing, from the Longford Live & Local gig rig.

Luke enthused, “It was a joy to see cheerful children and happy faces as freedom, warm sunshine, fresh air and a colourful exhibition created a delightful day, at the first big truly outdoor family day in County Longford for years.”

Michelle Shaughnessy and her Highland cattle were joined by the Agri Aware Mobile Farm and there was also a surprise visit by two members of the Garda Mounted Unit. From penalty shots to tractor balancing there was heart-warming rivalry everywhere.

Luke concluded, “A big thank you to everyone who contributed to the success of the 86th County Longford Ploughing Championships in any way. A special thank you to all the road and car park stewards who were extremely busy all afternoon and to the Gardai who directed traffic.

“As we sat down in early February wondering if we would ever get this event rolling again, who could imagine such a tremendous success. A great atmosphere, old friendships renewed and even sunburnt faces and ice cream in a Longford field in March!”