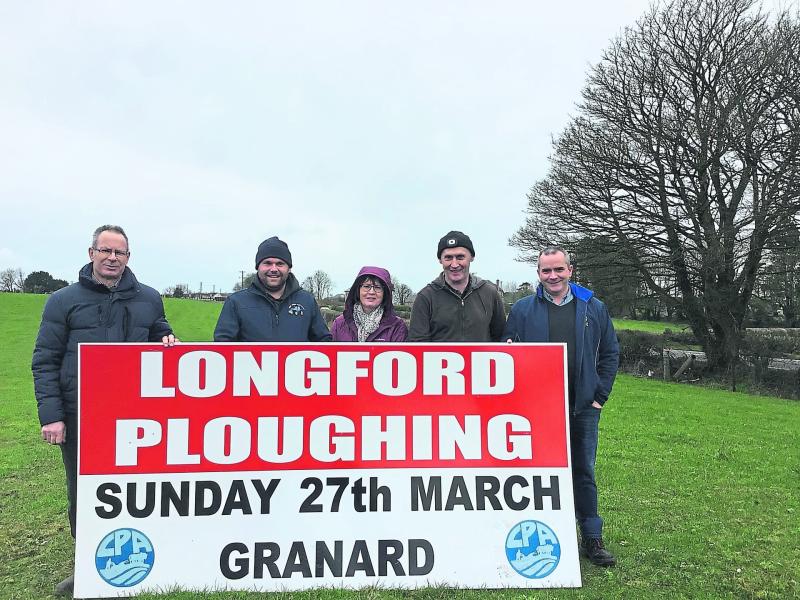 The field on which Sunday’s County Longford Ploughing competition is being held once belonged to the Glennon Family and the second field belonged to the Gaffney Family one of who emigrated to the United States and founded the town of Gaffney in South Carolina.

John Kiernan’s late father was awarded an honorary citizenship of the town of Gaffney in 1982.

Near the farmyard there is a section of the historical boundary of Ulster known as the Valley of the Black Pig. This section of the boundary runs from Lough Kinale near Abbeylara to Lough Gowna. The entire dyke was constructed in the 4th century and ran from Newry to the sea at Bundoran.

The road alongside the site of where the competition is held was built during the famine and has been known locally as the ‘new line’ since.

John Kiernan explained, “The ballad of the Rocks of Bawn is very dear to all our hearts as it is the birthplace of our late mother; Roseanne. The townland of Bawn is situated in the neighbouring parish of Mullahoran.”

The Rocks of Bawn

Come all ye loyal heroes a warning take from me
Never hire with any master till you know what your work will be
He will rise you in the morning before the break of dawn
I ‘m afraid you will never be able to plough the Rocks of Bawn.

Now rise up gallant Sweeney and give your horse some hay
And give to him a feed of oats before you go away
Don’t feed him on soft turnips, put him out on your green lawn
And then you might be able to plough the Rocks of Bawn.

Now my sock is getting worn and my coulter is getting thin
My heart is always trembling, afraid I might give in
My heart is nearly broken from the clear daylight till dawn
I’m afraid I won’t be able to plough the Rocks of Bawn.

My curse upon ye Sweeney, you have me nearly robbed.
For you’re sitting by the fireside with your dudgeen in your gob
You’re sitting in the fireside from the clear daylight till dawn
I‘m afraid you won’t be able to plough the Rocks of Bawn.

Oh, I wish the Queen of England would send for me in time
And place me in some regiment while in my youth and prime
I’d fight for Ireland’s glory from the clear daylight till dawn
And I never would return again to plough the Rocks of Bawn.

Written down by Tommy Kiernan Granard, husband of Rosanne Cooke Kiernan of Bawn Mullahoran Roseanne was Great granddaughter of 'The Widow Bawn'