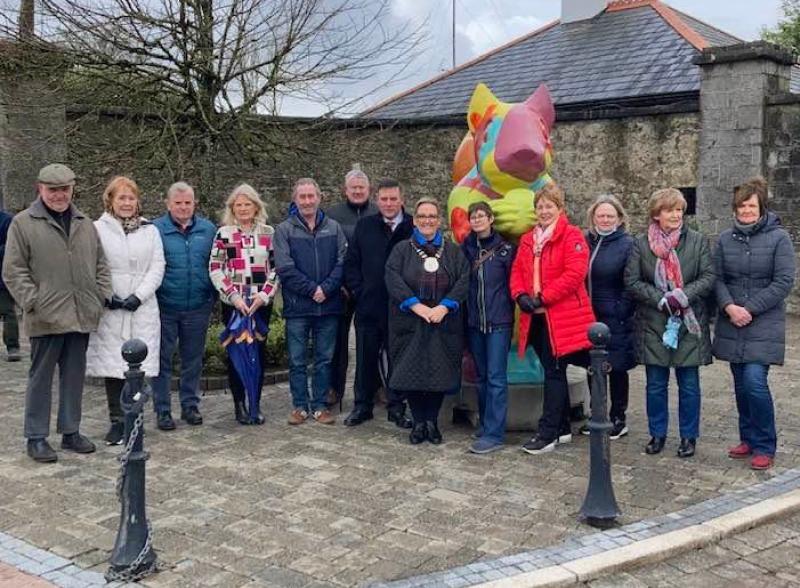 The culmination of a three-year project between Mide Arts Group and sculptor Tom Duffy, “Mr Nuts” – the eight-foot-tall, multi-coloured fibre glass squirrel was ‘released’ into nature at the same location that the infamous grey squirrel was released 111 years ago.

Mide member and project founder Shane Crossan explained “Iora Nua is a temporary public art project intended to support the development work of towns and villages, by bringing some colour and fun to the built environment”.

Iora Nua (‘Iora’ is the Irish for Squirrel) is a partnership project with County Longford Arts Office and is funded by the Creative Ireland programme and the Department of Tourism, Culture, Arts, Gaeltacht, Sport and Media.

Welcoming the project, County Arts Officer Fergus Kennedy said, “Longford County Council is delighted to partner on this project, because given the tough time that everyone has just come through, art like this brightens up neighbourhoods and has a positive impact on citizen well-being, tourism and the local economy”. This project is also part of Longford County Council’s place making programme.

Mr Nuts is decorated with larges leaves representing Ireland’s four native trees and the squirrel’s natural environment – the oak, the beech, the sycamore, and the chestnut.

The launch, on Friday, 18 February, was attended by members of Newtownforbes Tidy Towns, Biodiversity and Heritage Trail Group, who came out to welcome their newest neighbour.

Mr Nuts is one of four Squirrels that have been commissioned in 2022 to be unveiled in Longford’s three municipal districts later this year.

The commissioned artists include Mary Fleming, Phil Atkinson and Kevin Flood. In May, their new squirrels will be delivered to locations in Granard, Ballymahon and Longford town.