'I am looking forward to doing the things I didn't have the time to do before', says Longford Credit Union chief after calling time on 44-year-long career 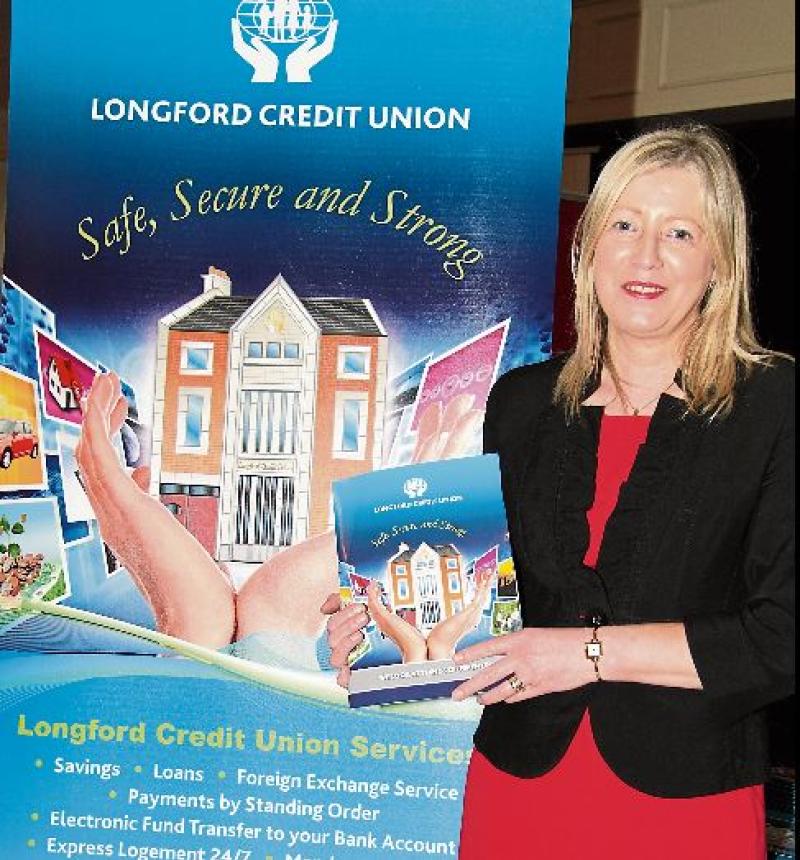 As friendly faces go, few, if any can compete with the sincerity and professionalism of Longford Credit Union manager Helen Whitney.

The Newtownforbes native has been front and centre of an institution which pales in comparison to the one she joined back in 1977.

Now, forty-four years later and with an energetic spring in her step, Helen is preparing to call time on an organisation she has dedicated more than two thirds of her adult life to.

“When I started off, Longford Credit Union was in Dublin Street,” she reminisced, even managing to recall its exact location, number 36.

“I was always interested in dealing with money and finance, the job came up, I applied and I was lucky enough to get it,” she added.

Whatever about her own feelings of self fulfilment, Helen was quickly tasked with building up the organisation's repute as its inaugural employee.

Add in the glaring reality of a society which, in the 1970s, was mired in economic, industrial and political unrest, starting a career was anything but straightforward.

Helen's decision to pursue a livelihood in finance would coincide with a momentous decision taken in 1979 which would ultimately go a long way towards breaking the country's one-to-one link with sterling which had existed since independence.

To most, its impact was much more psychological than it was financial. For Helen, all that concerned her was trying to ensure Longford Credit Union established a foothold in a predominantly mainstream banking marketplace.

“Dublin Street back then was a very different street to what it is now,” she recalled. “Private houses surrounded the office at the time.

“I would have worked on my own at the time and I was part of the neighbourhood I suppose you could say. “If the ESB happened to go off, there would always be someone who would call in with a cup of tea. The Credit Union was different as well.

“Everybody knew everybody. It would often be the case that one member of the family would come in with five or six books with them.”

As is customary with the passage of time, society is often asked to keep pace with technological advancements.

The same could also be said of the broader credit union sector as it attempted to diversify its own network of services to a much changed consumer marketplace.

In the age of contactless payments, online banking and digital disrupters, the pressure began to mount on credit unions to prove that they could remain relevant and thrive in an era of fast finance.

By the mid naughties and following in the footsteps of Bishopstown Credit Union, which became the first financial institution of its kind to do so, credit unions joined Ireland's ultra competitive mortgage lending market.

And according to Helen, it was a move which was as fundamental as it was unambiguous.

“It's been change for the better,” she contended.

“People are busier now, they are also more people that are working from home and now we have full online banking, agri facilities, mortgage lending and a person can send in an application for a loan and have it back in minutes.

“Soon, people will be able to open an account in one transaction.

“It's all positive and is the way forward.”

That same sense of positivity was one Helen alluded to when switching her focus to Ireland's decision to join the euro over two decades ago.

“That was a big change too but like everything else that came after it, it's been change for the better.”

It's hard to knock this innately proud Longford native's assured and rose-coloured outlook on the county's fiscal expansion over the past four and half decades.

An optimist and a figure who perennially adopted a door always open policy throughout her distinguished career, those virtues by Helen's own admission came in for particular scrutiny when Ireland's banking sector teetered on the brink of collapse in 2008.

By 2013, almost 13 per cent of owner-occupier mortgages were at least 90 days behind in repayments, a figure which would have been much higher but for the savvy and tactful intervention of key financial officials like Helen.

“It was a tough period,” she remarked with sobering honesty. “Seeing loyal members get into difficulty was hard, but we were able to reach new agreements with them.

“They (members) were able to come in and talk to us.

“We weren't just a faceless institution and that facility is still there.”

In more recent times, Helen has been front and centre in overseeing the smooth transition of Longford Credit Union's merger with that of Mullingar.

The move saw the coming together of over €300m worth of assets, coinciding in the new look amalgamtion becoming the largest credit union across the midlands and one of the largest in the country, serving over 50,000 members from five offices - Mullingar, Longford, Castlepollard, Kinnegad and Rochfortbridge.

“The merger with Mullingar Credit Union two years ago was a big decision, but it was definitely the right one,” Helen insisted without delay.

“I saw all the preparation and work that went into that.

“The board of directors and members were all behind us and it was certainly right in that it gave us access to full online banking services, agriculture loans and mortgage facilities which we couldn't have had on our own.”

It was arguably the single most critical decision Helen was involved in as 86 per cent of members at its 50th annual general meeting in December 2019 voted in favour of the proposed plan.

Not that the woman who helped administer that transformational change was keen to take any credit for it this week as she prepares to vacate her desk and begin the next chapter in her life.

Rather, and in a more jovial context, Helen quipped over how her beloved husband Paddy will also have to adapt over the weeks and months ahead.

“He is going to see a lot more of me now, but that's another day's work,” she chuckled.

“I am lucky in that I am blessed with good health and to be able now to go places spontaneously.

“I live in the countryside too beside a lake and there is a long walk only down the road from me.

“And I am leaving a job in very capable hands.”

While that may be the case, the challenge facing Mullingar Credit Union's board of directors in replacing the name of Helen Whitney might well be easier said than done.

Forty-four years of unstinting service would certainly appear to validate that task as Longford's financial sector bids farewell to one of its most dedicated and accomplished servants.