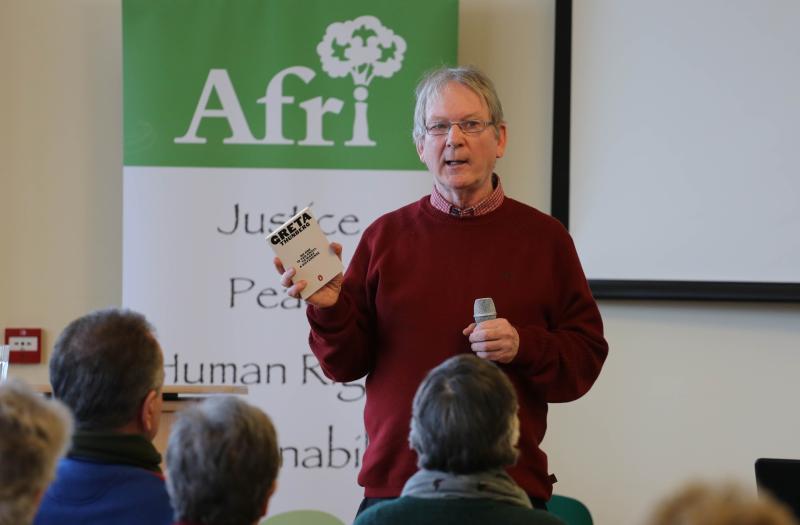 The Declaration has been prepared by a group of people opposed to the current drive for expanding weapons production in both parts of Ireland and to buying into a military ‘might-is-right’ mindset internationally.

Longford native Joe Murray is one of those behind the initiative. Murray is the coordinator of the peace and human rights organisation Afri - Action from Ireland. He says he is appalled that the development of military drones and laser weapons should be supported by the UK government in Belfast.

“Is this the ‘peace dividend’ we’ve been promised?  How can this be right in a city synonymous with the ‘Troubles’, which also gave its name to the Belfast/Good Friday Agreement? Are we simply going to export violence?,” asked the Carrickboy man.

The Downpatrick Declaration points out this tragic inconsistency with the Agreement’s commitment to ‘exclusively peaceful and democratic’ conflict resolution.

Mr Murray said, “And meanwhile the Irish Government, the other so-called guarantor of the Peace Process, has just held a public webinar to increase arms production as a basis for a sustainable economy in the future.”

Afri points out that such ventures are contrary to Article 29 of the Irish Constitution, as well as to the Belfast/Good Friday Agreement.  “Weapons production squanders resources that should help to build a better world.  It damages and pollutes the environment of the world’s most vulnerable societies.”

The group Swords to Ploughshares/StoP will issue the Downpatrick Declaration, along with Afri - Action from Ireland and the INNATE network.  “People across the island want to see the Peace Process and its commitments deepened rather than betrayed," said a spokesperson.

The spokesperson added, "Launching the Downpatrick Declaration on the 1500th anniversary of Colmcille’s birth is highly symbolic, as he was someone who became engaged in violence, saw the tragic futility of it, and went on to become a strong advocate of peace and learning.”

For more on the Downpatrick Declaration see www.downpatrickdeclaration.com