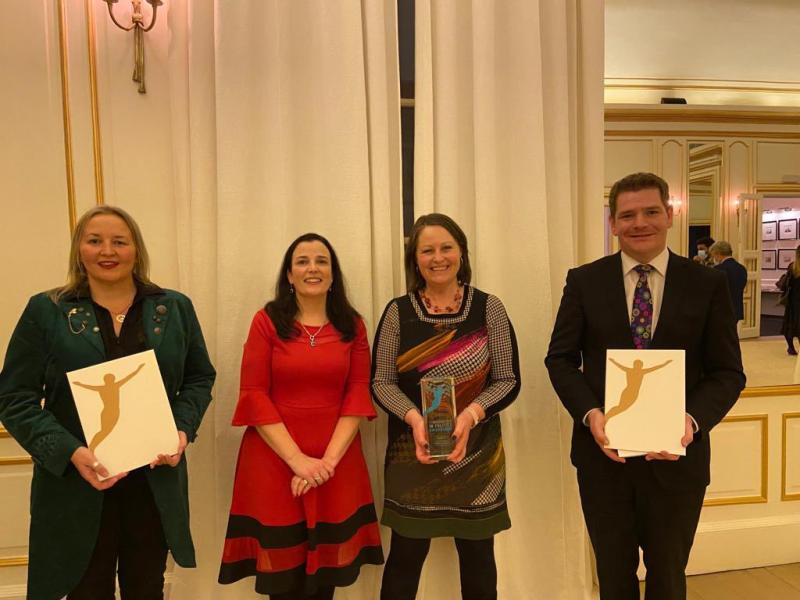 See Her Elected (SHE) the feminist, community-led, rural initiative to support women into politics in the Midlands and North West has been crowned the winner of the 2021 Innovation in Politics Award in the Democracy category. It is the first time Ireland has won this prestigious award.

The award was announced in Brussels this evening, Wednesday, December 1 by the Vice-President for Democracy and Demography of the European Commission, Dubravka Šuica.

A new chapter in Longford's political history has been made this evening on foot of the election of Cllr Uruemu Adejinmi as municipal district cathaoirleach.

Members of the See Her Elected team including Dr Michelle Maher and CEO of Longford Women’s Link, Tara Farrell were in Brussels to accept the award with Minister of State at the Department of Housing, Local Government and Heritage Peter Burke.

The annual Innovation in Politics Awards recognise creative projects from across Europe which break new ground to find innovative solutions for today’s challenges. The awards are presented to projects in recognition of their innovative projects based on European values of social balance, democracy, and human rights – regardless of their party affiliation or level of government.

A citizens’ jury comprising over 1,000 Europeans evaluated over 400 projects to determine the 90 finalists and winners in the Awards’ nine categories. See Her Elected beat off stiff competition to be selected as the overall winner in the Democracy category of the awards.

Programme Manager with SHE, Dr Michelle Maher said she is “honoured” that the SHE programme is receiving such international recognition.

“We are absolutely thrilled that See Her Elected has been selected as the overall winner in the democracy category in the Innovation in Politics Award. See Her Elected was established in 2019 so to reach this level of international recognition in a few short years is truly remarkable. The fact that we are the first Irish winners makes it even more special! It is fantastic recognition for See Her Elected and our work to increase the numbers of women in local politics in the rural NorthWest-Midlands Region of Ireland, where anything from 78% to 95% of the elected local authority councillors are men. We need our council chambers to be more reflective of society and we need to see more women in politics in order to have more balanced decision making.

“To be chosen by a citizen’s jury of over 1,000 Europeans and to selected as the overall winner in the Democracy category is really a significant achievement. In order to strengthen democracy, SHE engages directly with women in their communities through the innovative SHESchool. This award also belongs to the women in rural Ireland who joined our online SHESchool in their 100s to understand local government, active citizenship and explore how they could overcome the barriers that result in the low numbers of women in our county councils,” said Dr Maher.

Minister of State at the Department of Housing, Local Government and Heritage Peter Burke said: “We are over the moon with the news that See Her Elected has won this award, and we commend the leadership shown by the team across the NorthWest of Ireland. The Irish Government has prioritised funding for organisations who work towards greater diversity and gender equality in local politics and Department of Housing officials, and I have loved working with Michelle and her team. We must continue to support and encourage more women into local politics, until our political chambers reflect the societies they serve.

“While progress has been made in increasing the number of women involved in politics, this has been too slow and often limited to the urban areas of the country. We have also seen issues in retaining the talent already within the system. Targeted, influential organisations such as SHE have been instrumental in encouraging more women to consider local politics and supporting them to stay on and thrive within the system.”

CEO of Longford Women’s Link Tara Farrell said that the major international award was “testament to the passion, commitment and hard work of Programme Manager Dr Michelle Maher and the SHE team” and she was deeply honoured that the programme had received international recognition.

A big focus of this year’s awards is the fact that Covid gave a push to digitalisation in all areas of politics as Dr Maher explained: “Covid-19 required SHE to move the programme online, increasing the geographical spread and numbers of women engaged with. Women have been empowered to value their perspective and seek to have it included in decision-making. SHE has validated their viewpoints as being broader than ‘women’s issues’, and empowered them to have their voices heard on traditionally male issues such as planning, the environment, employment, water services, etc. The ongoing impact of this is to ensure greater engagement by rural women in local politics, leading to increased participation and visibility in local and national politics.”

Congratulations to Dr Michelle Maher & @peterburkefg & all the team at @SeeHerElected A fantastic programme for women who want to explore the opportunities & avenues onto our political landscape! https://t.co/wFElO2Ug9a

Very proud of @SeeHerElected - winners of the #PoliticsAwards21 in Brussels this evening. Thanks to @politicsawards for their warm welcome. #SHE is an initiative of @LWLLongford and @5050NorthWest addressing the underrepresentation of women in rural Ireland in local govt https://t.co/ymKwGIPaVZ

See Her Elected is a free, community-led initiative which is open to all women and aims to strengthen local democracy with a particular focus on the counties of Longford, Westmeath, Roscommon, Leitrim, Sligo, Mayo and Donegal. Dr Maher also explained that SHE has also written Ireland's first Guidebook to Running in the 2024 Local Elections as part of a toolkit of practical supports for women inspired to run for election and join their campaign teams.

The jurors of the Innovation in Politics award noted that how See Her Elected broke new ground in encouraging motivating and supporting women in rural Ireland to participate in local democracy. SHE’s ability to bring together people with different backgrounds and political views was also noted.

See Her Elected is funded by the Department of Housing, Local Government and Heritage under the stewardship of Minister Peter Burke and is a joint collaboration between Longford Women’s Link and 5050 NorthWest.