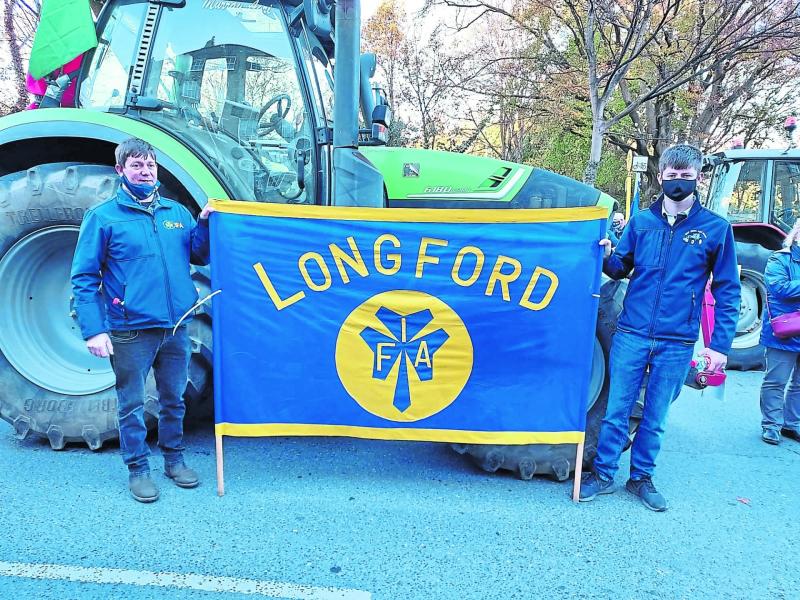 They were part of a convoy of tractors and farm vehicles to descend on the capital.

1. The CAP Basic Payments System will change significantly from 2023. A significant number of Limerick farmers will lose out through convergence and their inability to access the proposed eco-schemes. The bottom line is they will see their incomes cut.

2. Some of the measures proposed under the next Nitrates programme will force large investments at farm level. Very many farmers will be impacted with no discussion about how this will be funded.

3. Most importantly Limerick farmers cannot understand why they are being targeted for reductions in their cow and cattle numbers when they see Brazil cutting down Amazon rain forests to add 24 million extra cattle by 2030 to supply supermarkets in Europe.

Mr White said, “The farm family is the cornerstone on which the wider agri-food sector is built. Farm families are genuinely fearful about what the future holds. We hear all of these high-level targets being announced, but we have no clarity about what this will mean at farm level."

He added, "Farmers have families too. They are very conscious of the climate challenge and the need for farmers to play their part. But it can’t decimate our incomes. It must provide a future that is economically and socially sustainable, as well as being environmentally sustainable.

“Recent Government policy proposals, including those on the CAP, are all about reducing production and adding cost. The CAP is there to support farmers to produce food. It cannot be expected to fund climate action as well. The Government needs to come forward with a proper plan, with proper funding behind it."

He concluded, "The farming and food sector employs 300,000 people across the country and contributed €13bn in exports in 2020. Outside of Dublin and the mid-east region, the sector provides between 10% and 14% of employment. This is being forgotten in a rush to sterilise Irish farming.

“If we produce less food in Ireland, more will be produced in countries with a higher carbon footprint, which will increase global warming. We believe that with the right supports, we can reduce methane emissions by using available technologies but all this talk of cutting the so-called ‘national herd’ is really worrying farmers.

“IFA wants to work with Government on climate action, but there has to be real engagement. Setting targets without any regard for the consequences, or any supports, won't work."

President of Irish Farmers' Association Tim Cullinan said, "Farm families are genuinely concerned about their future. Equally, there is deep frustration that every policy of this Government, including their proposed National Strategic Plan for the next CAP, is designed to reduce production. Farmers are being asked to do more and more for less."

Mr Cullinan said a farm-level plan is needed, and that Minister for Agriculture, Charlie McConalogue, "cannot continue to avoid the views of farmers before he finalises plans next month".

He said farmers are "very conscious" of the challenge climate change poses and want to do their part, but that "farmers are being talked at, rather than talked to".