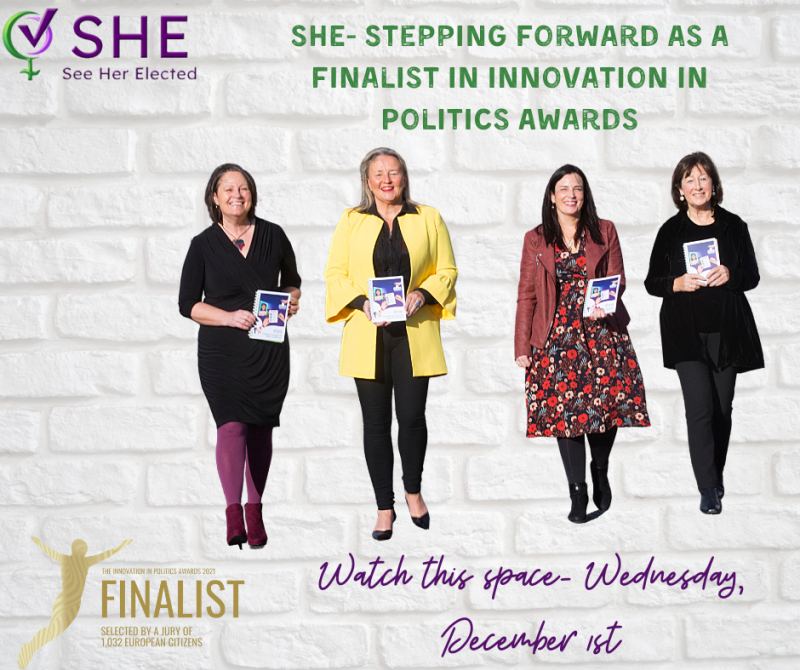 See Her Elected (SHE) the feminist, community-led, rural initiative to support women into politics in the Midlands and NorthWest is one of the finalists aiming for success at the prestigious Innovation in Politics Award 2021.

The gala awards ceremony will take place in Brussels on Wednesday, December 1 and the team from SHE will be aiming for success in the democracy category of the awards.

The annual Innovation in Politics Awards recognise creative projects from across Europe which break new ground to find innovative solutions for today’s challenges. The awards are presented to projects in recognition of their innovative projects based on European values of social balance, democracy, and human rights – regardless of their party affiliation or level of government.

A citizens’ jury comprising over 1,000 Europeans evaluated over 400 projects to determine the 90 finalists and winners in the Awards’ nine categories.

See Her Elected beat off stiff competition to be selected as one of the 10 finalists in the democracy category.

Programme Manager with SHE, Dr Michelle Maher will travel to Brussels next week with members of the SHE team and she is “honoured” that the SHE programme is receiving such international recognition.

“We are thrilled that the See Her Elected project has been selected as a finalist in the democracy category in the Innovation in Politics Award. It is fantastic recognition for the project and our work in trying to increase the numbers of women in local politics in the rural NorthWest-Midlands Region of Ireland, where anything from 78% to 95% of the elected local authority councillors are men. We need our council chambers to be more reflective of society and we need to see more women in politics in order to have more balanced decision making.

“To be chosen by a citizen’s jury of over 1,000 Europeans and to make it to the top ten finalists in our category is really a significant achievement. In order to strengthen democracy, SHE engages directly with women in their communities through the innovative SHESchool.”

A big focus of this year’s awards is the fact that Covid gave a push to digitalisation in all areas of politics as Dr Maher explained: “Covid-19 required SHE to move the programme online, increasing the geographical spread and numbers of women engaged with. Women have been empowered to value their perspective and seek to have it included in decision-making. SHE has validated their viewpoints as being broader than ‘women’s issues’, and empowered them to have their voices heard on traditionally male issues such as planning, the environment, employment, water services, etc. The ongoing impact of this is to ensure greater engagement by rural women in local politics, leading to increased participation and visibility in local and national politics.”

See Her Elected is a free, community-led initiative which is open to all women, regardless of their means and aims to strengthen local democracy and increase the diversity of voices in politics with a particular focus on the counties of Longford, Westmeath, Roscommon, Leitrim, Sligo and Donegal.

Dr Maher also explained that SHE has also written Ireland's first 'Guide to Running in the 2024 Local Elections' as part of a toolkit of practical supports for women inspired to run for election.

“SHE's new, local and targeted approach is building a resilient community of women, empowered to participate in a traditionally male sphere. Already, six women have decided to stand for election in the next local authority elections,” continued Dr Maher.

The jurors of the Innovation in Politics award noted that See Her Elected is a community-led initiative which supports women into politics in rural areas of Ireland, strengthening local and national democracy by increasing the diversity of political participation.

The overall winners for each category will be announced at a gala ceremony on Wednesday, December 1 with more information available on www.innovationinpolitics.eu  or www.seeherelected.ie

See Her Elected is funded by the Department of Housing, Local Government and Heritage under the stewardship of Minister Peter Burke and is a joint collaboration between Longford Women’s Link and 5050 NorthWest.