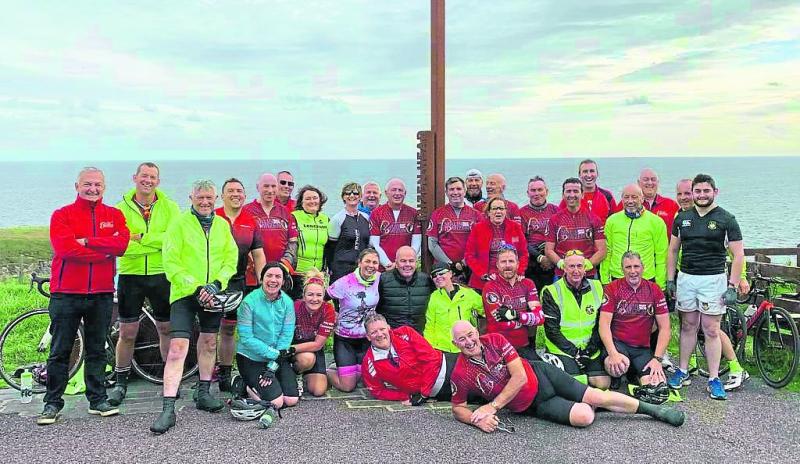 After two years in the making, including two postponements due to Covid, the Malin Head to Mizen Head cycle in memory of Donal and Dearbhla Considine took place.

A total of 24 cyclists and five support crew set off from Malin Head on a wet and windy Friday, September 24, completing the journey in six days and getting to Mizen Head on Wednesday September 29.

The group of cyclists included seven women and 17 men of varying cycling ability. Maybe the best thing about the week was how everybody bonded and helped each other to safely get from one end of Ireland to the other.

“Friendships were made or cemented along the way,” said organiser, Brendan Considine, “We had no casualties and the worst thing that happened was that one of us (to remain nameless) needed four bikes in the first two days and there were six punctures in total during the week.”

It’s not really possible to travel from Malin to Mizen and not encounter wind and rain. The team had its share of both. The journey from Glasson to Birr was the most extreme weather they encountered but everyone worked together and made it safely to a very welcome County Arms Hotel in Birr where they thawed out and enjoyed their evening.

“The daunting climbs of Moll’s Gap and The Caha Pass did not, despite some trepidation, prove too intimidating for any of our group,” said Brendan.

“Everyone got up and down safely and the last two days proved to be our most enjoyable as we rolled into Killarney, down from Moll’s Gap into Kenmare and from Kenmare to Mizen Head on the last day, including the beautiful climb up the Caha Pass.”

All funds that were raised from the cycle are going to Cian’s Kennels, a wonderful Longford Charity.

“Huge thanks to all the cyclists who completed the journey and raised money in Donal and Dearbhla’s memory,” said Brendan.

“Enormous thanks also to the support crew who did such a wonderful job of getting us safely from Malin to Mizen.

“Finally, thank you to everyone, way too many to mention, who donated to our adventure and helped raise much needed funds for Cian’s Kennels. We can’t thank you enough.”