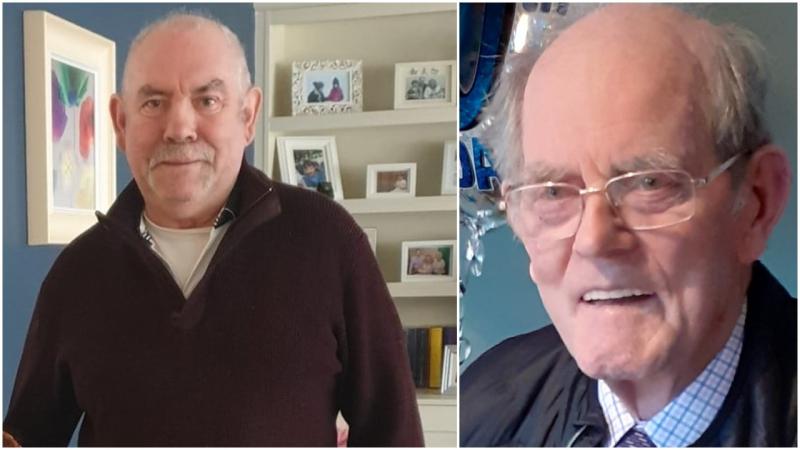 Poignantly, two neighbours from the Longford townland of Fostra, Aughnacliffe, Dessie Kiernan and Jim Kiernan, were laid to rest beside each other in Confey cemetery, Co Kildare.

Jim passed to his eternal reward on Saturday, October 2, while Dessie died on Wednesday, October 6.

In a tribute, posted on their Facebook page, Dromard GAA wrote that the community was deeply shocked and saddened to hear of the sudden passing of their friend, neighbour, and teammate, Dessie Kiernan at a relatively young age.

Dessie was a former, and very talented player with Dromard GAA club right up to under 21 level before moving to Dublin.

He remained a great supporter down through the years attending the bigger games and always enquiring about when his annual members draw was due.

He was also a great supporter of the Longford county teams through thick and thin and attended as many of their matches as he could. A Longford jersey from the famous 1966 and 1968 teams was brought to the altar as an offertory gift during Dessie's funeral Mass.

He loved to visit home and to catch up with all his many friends in the wider Dromard, Colmcille, Arva and Drumlish area.

Known ‘far and wide’, Dessie’s large circle of friends always looked forward to his visits. He was deeply ingrained in the community, it was as if he had never left.

A great GAA man, he loved sport in general, since moving to Leixlip many years ago, Dessie was also a great supporter of the Confey GAA Club and was very popular in the area. He was a regular attendee at their matches and loved being involved in all their club activities.

With the passing also of James (Jim) Kiernan (on Saturday, October 2) just four days prior to Dessie, it was coincidental but fitting that two neighbours, who only lived a few hundred yards apart from where Dessie was born, both from the townland of Fostragh, both with the surname of Kiernan, both moved to and resided in Leixlip, were interred beside each other in Confey Cemetery.

The death occurred, peacefully, surrounded by his family and in the loving care of the staff at Woodlands, Connolly Hospital, Blanchardstown, on Saturday, October 2 of James (Jim) Kiernan, Leixlip, Co Kildare and formerly of Fostra, Aughnacliffe, Co Longford.

Jim was predeceased by his parents Patrick and Rose, and baby son Joseph, brother John Joe and sister Bridget.

Jim lay in repose at Cunningham’s Funeral Home, Lucan on Tuesday, October 5. Removal took place from his home to the Church of Our Lady’s Nativity, Leixlip on Wednesday, October 6 arriving for Requiem Mass at 11am followed by burial in Confey Cemetery.

Dessie was predeceased by his parents Brian and Mary (née Farrell), both born in Fostragh.

Dessie reposed at his home in Confey, Leixlip, on Sunday evening, October 10 for family and close friends only. Removal took place on Monday morning, October 11 to The Church of St. Charles Borromeo, Confey arriving for Funeral Mass followed by burial in Confey cemetery.

May Dessie and Jim Rest In Peace.