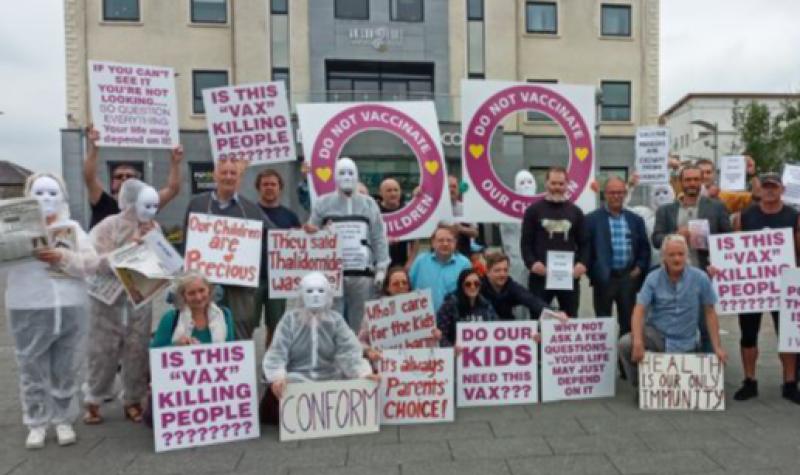 Some of the group that paticipated in the anti-vaccine rally in Longford town last Saturday, pictured at the Market Square

Dr Padraig McGarry who stepped down as president of the IMO in April following a two year term hit out at the gathering last Saturday.

The Longford medic called into question the coercive tactics employed by those involved with a number taking to the streets dressed in boiler suits and ghost masks.

“I think it's inappropriate that such groups would hinder the free decisions of people who have made their choice to go and get vaccinated,” he said.

“It is unhelpful and people should be allowed to go about their daily business without intimidation.”

Dr McGarry's comments were made in the wake of a weekend rally which saw a sizeable band of people take to the streets of the county town holding posters before holding momentary gatherings outside a number of pharmacies.

The group continued their protest by congregating on the steps of the Courthouse ahead of a brief walk through Longford Shopping Centre.

“I cannot believe that we have steamrolled down this road to vaccinating young people when the risk from covid to under 30s is minimal,” said spokesperson Andy Smith, who described the event as an “information day” as opposed to a protest.

Mr Smith carried a sign which which read, ‘Health is our only immunity’. He added, “To me this is the key to maintaining health and taking responsibility for our own wellbeing as much as possible.”

Mr Smith suggested, “Young people have been coerced into taking this jab on the promise of being able to travel and for life to ‘return to normal’.

“Many are unaware that these vaccines are still in the ‘experimental phase’ and are only in ‘emergency use’ at present, while awaiting safety and efficacy approval.

“No sooner have they taken these jabs, when they are now being lined up for the boosters and where this ends, no one knows.”

Dr McGarry countered those arguments however, saying “scientific evidence” had illustrated the benefits of innoculisation in the battle against Covid-19.

A further easing of restrictions on Monday saw the return of indoor events where attendees are fully vaccinated with live music at weddings and religious ceremonies operating at 50 per cent capacity rates being given the green light.