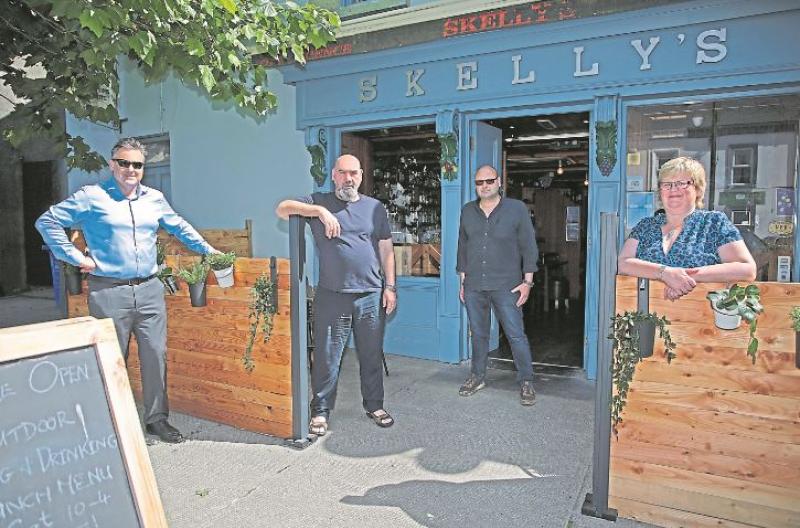 Ballymahon is booming, there’s no doubt about that. Center Parcs, the Royal Canal Greenway, local cafés and eateries, among other amenities are attracting more and more people to the south Longford town.

But local traders are worried that an increase in traffic through the town will result in a decrease of footfall on the streets.

Those concerns arise from proposals by Transport Infrastructure Ireland to place a set of traffic lights at the N55 Athlone Road junction at the end of the town instead of a roundabout which was previously planned.

“There is a lot of work in the pipeline for the streetscape. Two years ago, Longford County Council put in for a part 8 planning which would have traffic lights at Nally’s corner. A roundabout was due to go in at the Athlone Road junction,” explained John Byrne, Chairman of the Ballymahon Traders’ Association.

“But two or three months ago we were told the proposed roundabout wasn’t viable and there was a second proposal shared with us that would see a set of traffic lights and pedestrian crossing put in there instead.

“So we had a proposal for two sets of lights at Nally’s corner and crossing the street at the library. And now they want to put lights in at that junction. There’s strong opposition to this from local businesses.”

Traders are concerned that this new proposed layout will create a bottleneck in the town, tempting people to divert to back roads such as Shrule or the Newcastle Road to avoid congestion.

“Two years ago, we were resigned to the fact that we would have traffic lights in the middle of the town but a set of traffic lights on that junction too will create a bottleneck. Between Nally’s corner and the bridge you’d have severe congestion,” said Mr Byrne.

“The original plan had a cycleway and pedestrian walk at the roundabout, which has been scrapped too. It’s very strange that it got through part 8 planning with TII but now it’s not fit for purpose,” he added.

“When this was originally proposed and went to public consultation in 2018, everyone was happy with the proposal for traffic lights at Nally’s corner and a roundabout at the Inny. But somewhere between 2018 and 2020, it has completely changed.”
“And without public consultation,” agreed local pharmacist Ciarán O’Hanlon.

“We’re concerned about what’s going on because if TII and the council do go ahead with two sets of traffic lights, what happens with the streetscape? We’ll lose dozens of car parking spaces on Main Street.

“People will find it difficult to access the medical centre and both pharmacies as well as Thomond Lodge Nursing Home. There will be significant delays for locals too,” he added.

“We’ve seen plenty of cars speed up to make it through the lights that are there. But there’s also more Nitrate Oxide produced if the cars are stalled. Then there’s the issue of people avoiding the town by going on the minor roads. Those are three health and safety issues.”

Surveys carried out on the road in 2018 form the basis of the TII proposal but, according to local businesses, those findings were completely “out of date” after the opening of Center Parcs.

“From a trading point of view, we feel that to do nothing at all and to leave it as it is would be the best option if a roundabout is completely off the table,” said Mr Byrne.

“The current proposal of two sets of traffic lights is not fit for purpose. We are behind the original proposal and we are in agreement with traffic lights at Nally’s corner.”

“We’re willing to work with the council to come to an agreeable solution. The council have been helpful and we’re thankful for that,” Mr O’Hanlon added.

“But there is also talk of the funding being pulled if the proposal isn’t accepted as it is. So are we being blackmailed into accepting it when this new proposal hasn’t even been put to the people of Ballymahon in public consultation?”

Local councillor Pat O’Toole told the Leader that, as part of the original streetscape proposal, a set of traffic lights would be installed at Nally’s corner, a compound roundabout would be constructed at the Athlone road junction and the entire town would get a makeover.

A total of €2m was set aside for upgrading of footpaths, underground cabling to reduce the number of ESB poles, and new water and gas mains were put in with plans to extend the gas line to local homes.

“In recent times, new consultants were appointed to the project and TII have come back with a proposal that there would be no compound roundabout but two sets of traffic lights,” said Cllr O’Toole.

“TII are adamant that a roundabout is not recommended for built up areas - only for motorways or dual carriageways. Their view is that roundabouts prove a real threat to pedestrians and cyclists. They’re biased towards them rather than the man in the car,” he added.

He also stressed that the Nally’s corner junction is in dire need of traffic lights, expressing a fear that funding could be revoked entirely if the TII proposal is not accepted.

“If Ballymahon rejects the TII proposal then they might move on and it’s lost to Ballymahon. We could lose that €2m funding,” he said.

“I get the impression that this is happening as they’re proposing now or not at all. Any engineer will tell you nothing has been done with the street since probably the 1930s - except layers of tar on layers of tar. Essentially it’s built on mud.

“There’s a good bit of footpath work that needs to be done. And we’re hoping to put in CCTV too. These works would be great and would make a difference to the town.

“There may be some compromise but any time I’ve met with TII, they say it’s government policy and they’re going to act on it,” he concluded.