Bittersweet: Burnett for Tokyo but Quinn loses out in shock omission 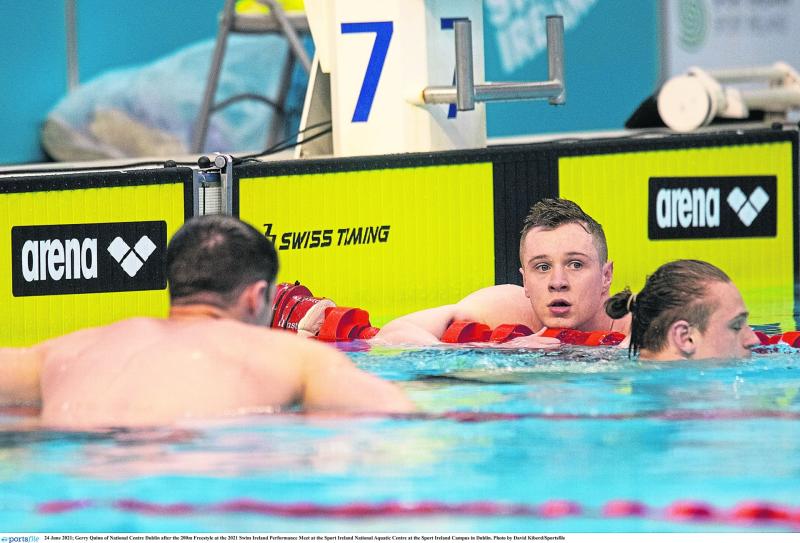 Gerry Quinn, who has unexpectedly been omitted from Ireland's 4x200m Freestyle Relay team

Longford will have two Olympians on the plane to Tokyo after all later this month following a “rollercoaster” past week which saw Kenagh’s Derek Burnett (pictured) qualify for the Olympic Trap event and swimmer Gerry Quinn being sensationally dropped from Ireland’s Freestyle Relay team.

Burnett booked his place on what will be his fifth appearance at an Olympic finals after a dramatic shoot out in Co Tyrone on Saturday.

The veteran shooter saw off Rathkeale’s Ian O’Sullivan by five shots after hitting 119 of his 125 targets compared to his opponents 114/125.

“It’s great to be going,” said Burnett, in the wake of his qualification.

“Given what has gone on with Covid and that, I haven’t been doing as much training as maybe I would have liked but it’s nice to see that my form is pretty good at the minute,” he added.

Burnett’s delight at sealing his ticket to Tokyo was overridden by the International Swimming Federation’s shock decision to axe Longford swimmer Gerry Quinn from the Irish 4x200m freestyle relay team.

The 23-year-old student had been confirmed as being one of Ireland’s four representatives on its relay team after setting a new Irish senior record by finishing fifth in the recent European Championships in Budapest.

However, following the application of a rule by FINA and the International Olympic Council which states a swim team can only have two ‘relay only’ swimmers in its ranks, the names of Quinn and Bangor native Jordan Sloan were replaced by Shane Ryan and Brendan Hyland.

“The rules state you must have two ‘A’ swimmers on a relay team and unfortunately for Gerry and Jordan, they have ‘B’ standard times,” said Ronan McNevin, head coach with Longford Swimming Club.

“It’s been an emotional rollercoaster for them. It’s very annoying, frustrating and upsetting but the rules are the rules.”

Mr McNevin, who has trained Quinn from the age of six, said the son of Patricia (nee Honeyman from Ballinamore) and Longford solicitor Seamus Quinn, will now set his sights on qualifying for the Paris Olympics in three years time.

“He’s going to go back to America, finish his studies with University of Florida and continue swimming under the guidance of the US Olympic swimming coaching staff,” he added.