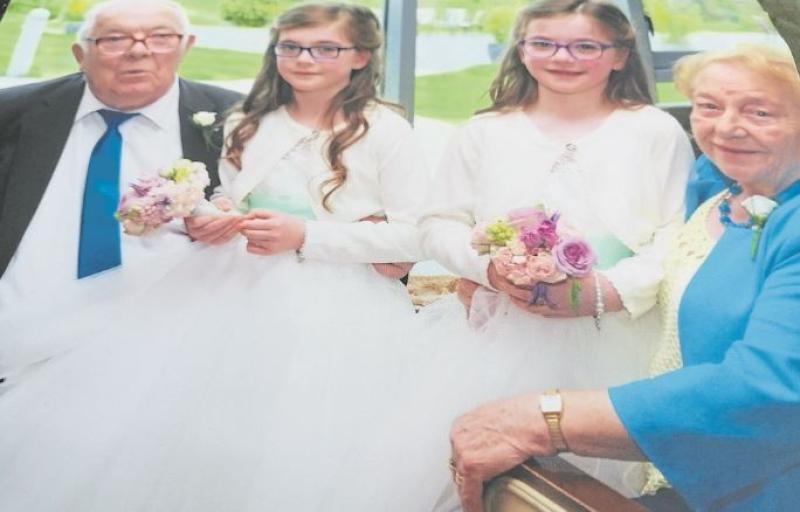 John and Rita Diffley (née Phipps) grew up as neighbours and childhood sweethearts in Templemichael Terrace, Longford town. They now reside at Fairgreen View and this Sunday, the couple are looking forward to celebrating their Blue Sapphire (65th) wedding anniversary.

John and Rita were both the eldest in families of eight and they were married on June 20, 1956 in Willesden, North London. It was also the date of Rita’s 21st birthday.

Sixty-five years later, their love is stronger than ever and while the past 16 months coping with the challenges of the Covid-19 pandemic have been tough, they are delighted they now have their vaccinations and are able to see all their family once again.
John and Rita have three sons Thomas, Bobby and James and one daughter, Yvonne.

Prior to the wedding in ‘56, John had just been demobbed from the British Army, having served 3 years. This had come immediately after he served three years with the Irish Army.

Rita had been employed in the housekeeping section of the Nurses Home in West Kensington. Many of the nurses were Irish and employed in St George's Hospital London. She spent three happy years there, and had been working in The Longford Arms prior to leaving for London at 18 years old.

Daughter Yvonne explained, “My dad had many jobs over the years, working in the coal mines in Nottingham alongside other Longford men who had left Ireland in the 1950s to seek employment in England. Tram and bus driving in London, and long distance lorry driving all followed.

“My mother was busy at home with the children. When she got us all in school, she found work as a dinner lady and stayed for many years in the local primary school William Patten in Stoke Newington, North London.”

John and Rita decided to move back to their native Longford in 1980.

Rita worked in The Midland Clothing Factory in Glack running the canteen and later in St Mel’s College. John started in Willis Oil (Cameron), and stayed for 18 years until retirement 23 years ago.

Yvonne said her dad was a gifted dart thrower and he played for many London Teams and in Longford, The Dervan. “He has been an avid reader all his life, whether it be the daily newspapers or a good thriller or murder mystery.”

Yvonne concluded, “My parents are an exceptional couple. They have been hugely supportive of all their extended family and absolutely adore each and everyone of the children. The kids have been their lives. And in these times, I'm sure everyone will agree that it is no mean feat to be celebrating their Blue Sapphire anniversary.”