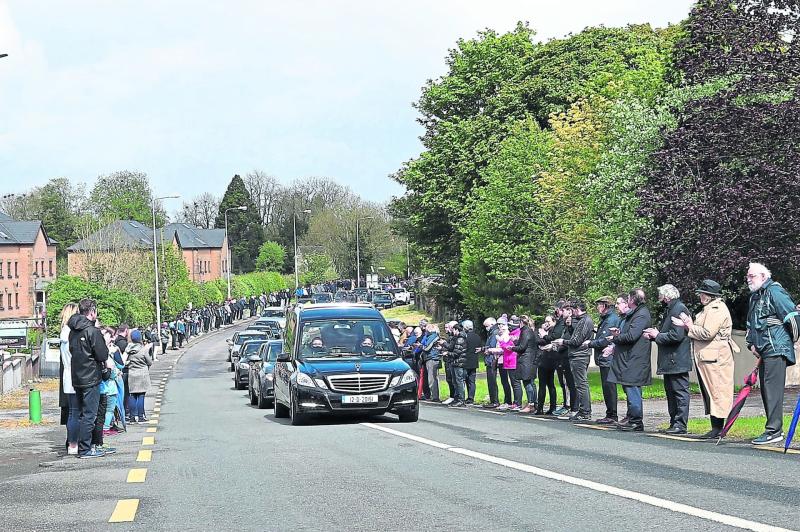 Longford came out in force on Sunday to bid farewell to a favourite son. Had it not been for Covid-19 they were estimating that as many as 5,000 would descend on St Mel’s Cathedral.

But it was probably the measure of a man who won the hearts of a county that they still came out, and in line with public health guidelines, positioned themselves on every street corner as the greatest of Shams made his final journey.

It was a simply extraordinary show of affection for a man who captured the hearts of a county.

Tom O’Brien loved to sing. We remember many epic St Mel’s musicals but his greatest performances were late at night and it was only fitting that he recorded one of his favourite party pieces and raised €50,000 for the Irish Cancer Society in recent months with his good friend Éamon Ó Ceallaigh.

Whilst it didn’t feature on his song sheet, we somehow felt that the sound track for Sunday should have been ‘Big Tom doesn’t play here any more’.

Not since the death and funeral of the late great Smiler Fay, nearly forty years ago, has Longford seen such a funeral.

The outpouring of sympathy and affection on social media gladdened the hearts of so many in these darkest of times. Because everybody has a Big Bear, Tuskers or Sham story.

T’was spontaneously planned in advance – nobody was leaving Longford town on Sunday. Because May 9 will forever now be remembered as ‘Tom’s Day.’

If we didn’t have a St Patrick’s Day parade for two years then we were going to pack it all into this one day in an unashamed and unbridled show of affection for a larger than life character.

There was just the one float in the parade but never was there a more popular grand marshal.

His funeral mass was heart wrenching. A eulogy from his son, Daire, spoke volumes to a devoted father and husband who still somehow found time for the rest of us.

As his health deteriorated he still texted and messaged so any others facing similar battles. He was a confidante and counsellor and the greatest of soul mates.

Fr Michael McGrath delivered a beautiful funeral mass and it was probably the most viewed ceremony ever broadcast from St Mel’s Cathedral.

It suddenly felt perfectly right and proper when Fr Michael asked the heart broken O’Brien family, “Are ya wide Sham?”

O’Brien’s Shop on Park Road was a Longford institution. You didn’t go there for the groceries alone. You went there to see Tom and trade the banter.

Whether it was legal of not, t’was the place to get the ‘loose ones’ (single cigarettes) but if Tom thought you shouldn’t be smoking you were quickly dismissed. But in truth nobody was ever turned away and if you didn’t have the money, Tom always knew and nobody ever left empty handed.

There were no ‘big people’ in O’Brien’s shop because that was Tom’s place and all were equal.

But t’was probably his time behind the bar in Eamon’s that we came to know Tom best. He was just back from the USA and he was a cross between Tom Selleck and Tom Cruise.

Eamon Farrell probably felt upstaged but knew more than most the value of a good looking sham behind the bar. T’was the big GAA bar of its time and hundreds from every club came to town on Sunday to bid their farewell.

Tom was a big GAA man and of course the games coursed through his veins thanks to the family connection. But there was no other club aside from Slashers and when his ‘gossons’ or ‘young wan’ were playing nobody else on that pitch mattered.

Though now long since closed, the front door to Eamon’s Town & Country Bar featured a single sign on Sunday: ‘’Are ya wide Sham?”

We felt almost as if we should now patent the saying and refuse to allow anybody else use a catchphrase that has immortalised one of our own.

As the funeral cortege weaved through Teffia Park, Park Road and past his beloved Slashers, there were extraordinary outpourings of affection as ‘neighbour’s childer’ came out to say their goodbyes.

Many bought homemade signs and couldn’t hide their upset as they said their farewells.

The Musical Society, the Gaelscoil, Slashers, St Joseph’s, Mean Scoil Mhuire, Longford Variety Group and St Mel’s Drama Society came out for guards of honour but our hearts sank when we saw his colleagues from An Post lining Ballymahon Street.

For so many Tom was more than a postman, he became a friend and so many longed for the monthly bills if it meant a call from Tom.

He loved to cook and bake. Tom’s boxty was famous and he regularly delivered fresh batches to the nearby Gaelscoil.

As the rest of us grew old Tom still remained uber cool. Few other middle aged men could wear glasses as well as Tom. And when he shoved them back on the head, you began to smile as you knew another trademark one liner was about to unfold.

They say you are likely to meet only a few people who will truly impact on your life. This weekend we said goodbye to one of them and whilst we still respected Covid-19 restrictions, 5,000 people came out and said their ‘goodbyes’ to Sham.

Tuskers, Big Bear or Tom the postman, left us on Sunday but how he would have loved that farewell and it will arguably be the defining memory of the Covid era for the people of Longford.

Because Covid was a huge event in our lives but even Covid couldn’t overshadow our ‘Sham’.