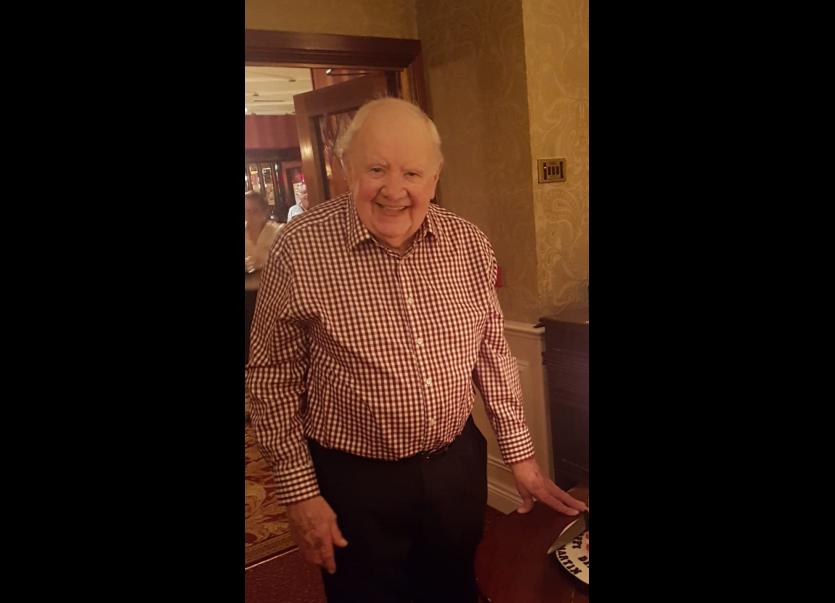 It was with deep regret that we learned of the peaceful death on Friday, March 5 at Mullingar General Hospital after a short illness of Martin O’Connor, Creevaghbeg, Ballymahon, formerly Rockchapel, Cork and Widnes, Cheshire, aged 92 years old.

Martin is pre-deceased by his wife Kathleen who passed away in 1999, his sons Michael, Jimmy and Alan and his sister Kathleen.

Martin left Rockchapel when he was 18 years of age and joined the RAF in England. He went to work in The Isle of Man where he met his wife Kathleen. He was 20 years old when he got married and she was 19.

When he left the RAF he worked in a lorry driving company as a long-distance driver and spent his weekdays driving all over the UK. He then set up a guesthouse/restaurant with Kathleen and had his own pick-up truck business. They had 5 children, 2 daughters and 3 sons.

Martin and Kathleen came back to Rockchapel in the late ‘70’s where he worked for Keating’s Bakery driving the bread van for about 10 years. On his retirement they moved back to England for five years and moved to Ballymahon in 1995, sadly Kathleen passed away four years later.

It seems the first man he met in Ballymahon was the late Kevin Canavan. Kevin directed him to anyone he needed to help him in regards to setting up his new home, garden (the late Bill Dooley), plumbing (Gerry Frawley), electrical (the late Walter Quirke).

Martin was a very popular man in the area, he was a thorough gentleman at all times. He had great friends and was liked by all. He was a very independent man living on his own right up to his death. He enjoyed a pint in the now closed Curran’s Pub. This is where he met all his neighbours and the people who helped him settle into life in Ballymahon.

He enjoyed travelling the country with his very good friend Seamus Dooley and the Ramblers Band every weekend. He liked to join them for a song or two, he was quite a singer! Some of his favourite songs to perform were My Donegal Shore and The Old Bog Road.

His sister Mary is still living independently at the fine age of 95. It was his daily ritual to ring her every evening at 8pm. They had a very special bond. He was fantastic at keeping in touch with people on the phone through calls and text. He took part in computer lessons at the age of 80. He also began learning the accordion at 80!

And for his 80th Birthday he threw a party in Cooney’s Hotel for his many friends in the area. He loved to socialise and travelling, he travelled to many parts of the world and enjoyed his many Cruise holidays.

Martin’s Funeral Mass took place on Tuesday, March 9 in Tang Church celebrated by Fr Gerry Murphy with music by Aine and Eimear Dooley. Among the songs they sang were of course “The Banks of my own lovely Lee” and their father Seamus sang “My Father’s House”.

Martin’s CD played at the beginning of the Mass for the people viewing online on the Tang Parish Facebook page. He was laid to rest in Forgney Cemetery. Present at the Funeral were his daughters Patsy and Kathy, Patsy’s partner Tony, his nephew Patrick and the Dooley family. Due to Covid 19 it was restricted sadly to 10 people.

He got a great send off by all his neighbours and friends in Creevaghbeg as they lined the road as he was on his way to his final resting place in Forgney. His devoted carers/home helps were Doreen Flynn and Rose Percival who were very good to him, Martin spoke very fondly of them. Seamus Dooley was his best friend for many years and cared for him. He will be sadly missed by Seamus, Patricia and all the Dooley family, Rathmore. A night never passed without one or more members of the Dooley family visiting him which I’m sure he appreciated and enjoyed.

We extend our deepest sympathy to Martin’s daughters Patsy (Cork) and Kathy (Wales), his sister Mary (London), his daughters-in-law Anne and Reta, sons-in-law Jamie and Tony, much-loved grandchildren and great-grandchildren, nieces, nephews, relatives, neighbours, friends especially the Dooley family and his home-helpers Doreen and Rose. He is probably up above now having a chat with his old friend Ted Quirke, his drinking buddy down the years. Ar dheis De go raibh a anam dilis.