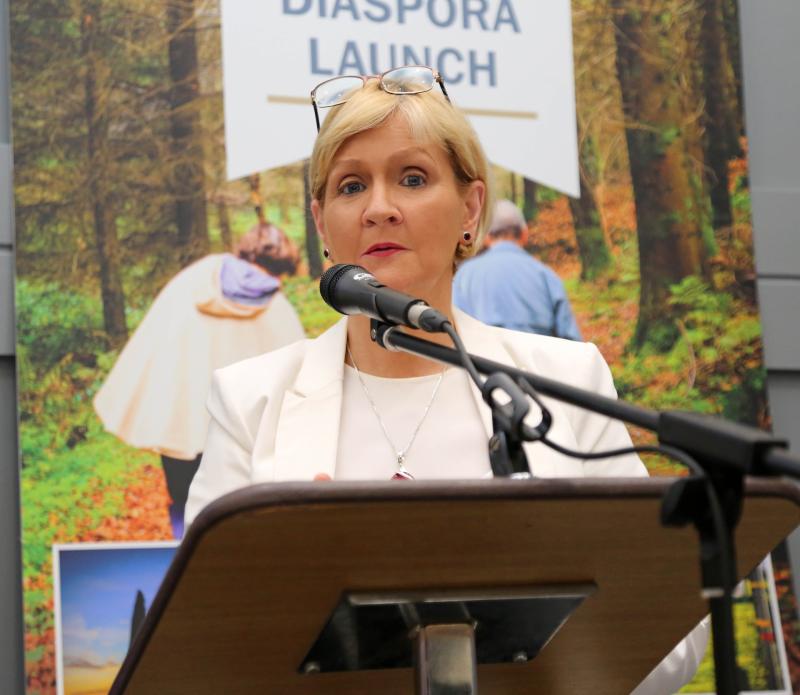 If there’s one person at Longford County Council who will never be forgotten, it is surely Administrative Officer Anne Lee. Exactly one year on from the very last meeting in the council chamber before Covid-19, the Offaly native attended her last ever meeting via Microsoft Teams on Wednesday afternoon, March 10.

And, while that meeting was completely different to the one a year earlier, it still ran smoothly and successfully, thanks largely to the support each council member received from Anne herself when the pandemic forced them to engage online instead of in person.

Hugs and handshakes were absent as attendees were spread across the county, but the meeting was no less emotional with local group leaders passing on their congratulations and best wishes to their well-loved and highly respected colleague on behalf of their respective parties.

As Cathaoirleach of Longford County Council, Paul Ross, pointed out “we’d be here all night” if all 18 members said their bit - not that it would have been an inconvenience in any way. In fact, Anne has been such a strong force within the council for over three decades that no member of the meeting would begrudge her the time it would take to truly pay tribute to the work she has carried out.

Fortunately, she will have the opportunity to read the best wishes of each of the council members who will write letters of thanks and congratulations to Anne Lee before she finishes up at the end of the month.

Anne Lee hails from Banagher, Co Offaly and, while she is very proud of her roots, Cllr Colm Murray rightly pointed out that the people of Longford were “entitled to lay claim to her now” after her many years contributing to the county.

She came from a farming background and her parents, Jack and Mary Kirwan instilled a serious work ethic in Anne and her siblings, Pauline, Jim, Eithne, Marian, John and Joe.

When Anne first moved to Longford, she initially worked with the Midland Health Board in the County Clinic.

Anne herself admits that she only expected to serve a six-month stint in the role but life, as it has a funny way of doing, got in the way and she met a Longford Slashers man, Johnny Lee. They pair got married in 1984 and made a home for themselves in Mullaghavourneen.

“To say that John has been my rock for the past 37 years is a complete understatement,” said an emotional Anne.

“We were blessed with three fantastic daughters, Catherine, Deirdre and Áine, who have turned into the most wonderful people.

“John and I are so proud of the three of them, especially for their positivity, resilience, kindness and sense of humour during these difficult times of the Covid pandemic.”

After working in the county clinic, Anne moved with the Midland Health Board to work in St Loman’s Hospital in Mullingar. From there, she returned to Longford where she started working with Longford County Council in 1986.

“I started in the Church Street Offices. I moved to the Dublin Street offices in 1987 to work for Michael Killeen, the then County Manager,” she recalled.

“I worked in that office for 18 years and all I can say is that I learned from the best. Following my time in the county manager’s office, I moved downstairs to the newly established cash office and customer service desk at that time.

“I have so enjoyed the role and my interaction with the members of the council. Michael Killeen was always known to say that the person who puts their name on a ballot paper is a very brave person and, from working so closely with the members, I agree wholeheartedly with that statement.”

In 2001, Anne also took on the role of communications officer which, in those days, was not the role it is now and she wished recently appointed Denise Canavan every success in her new role as dedicated Communications Officer with the council.

As part of her role as meetings administrator, Anne also organised civic receptions on behalf of the members of the council.

“The first civic reception I organised was in 1992 when the late Albert Reynolds was elected Taoiesach and my last was in January 2020 for the Longford Community Games, which was hosted by former councillor and now Senator Micheál Carrigy,” Anne recalled.

“During those almost 30 years, the council acknowledged a myriad of individuals and groups. It was always so evident how delighted and honoured those groups and individuals were to be recognised by their own county council.”

It was made clear by all the councillors who spoke about Anne at the meeting, that the well-loved meetings administrator was a pillar in the organisation and one who will be sadly missed. Her organisation skills, her extreme professionalism and her atention to detail were second to none and she has left big shoes to fill - and a standard which Anne Marie McKeon will no doubt meet as she takes on the important role.

“I know it is always dangerous to single out any one person on an occasion like this but I have to pay tribute to Nora O’Farrell who has been my line manager numerous times over the years and has also been a very, very dear and trusted friend since 1987,” said Anne.

“We have soldiered through a lot together, Nora and I, both work-related and personal. Thank you Nora.”

In her time with Longford County Council, Anne worked with seven sets of councillors and a total of 32 cathaoirligh and was quick to acknowledge the people she had the pleasure of working with over the years who have passsed away.

“Today I remember especially those colleagues who have passed away while in service, particularly for me my dear, dear friend Nellie Harkin and John Martin and Michael Cooney. Also, Cllr Paddy Belton, who passed away while serving as a councillor,” she said.

Wishing Anne Marie McKeon every success in her new role as Meetings Administrator, Anne said that she felt very fortunate to have worked with Longford County Council for so long and to be retiring after 40 years in such good health.

“I am heading into a new phase in my life and I look forward to having time,” she said.

“Time for my own family, for John, Catherine, Deirdre and Áine and, of course, my Offaly family - my brothers and sisters, Pauline, Jim, Eithne, Marian, John and Joe and their families and my dear sister-in-law Bríd and her family and, of course, time to make use of all the beautiful new walks developed by Longford County Council over the past number of years.”

Anne concluded by paying tribute to all of her council colleagues, including elected members and executive members with whom she has felt lucky to work.

“To Paddy Mahon, John McKeon, John Brannigan and especially Barbara Heslin, thank you for your guidance and support since you took over as the management team for Longford County Council,” she said.

“It has been an absolute pleasure working with you. I wish you, the councillors, the management team and the staff, non-stop success as you continue to promote this county that adopted me in 1980 and that I am very proud to be a citizen of. Go raibh míle, míle maith agaibh go léir,” she concluded.