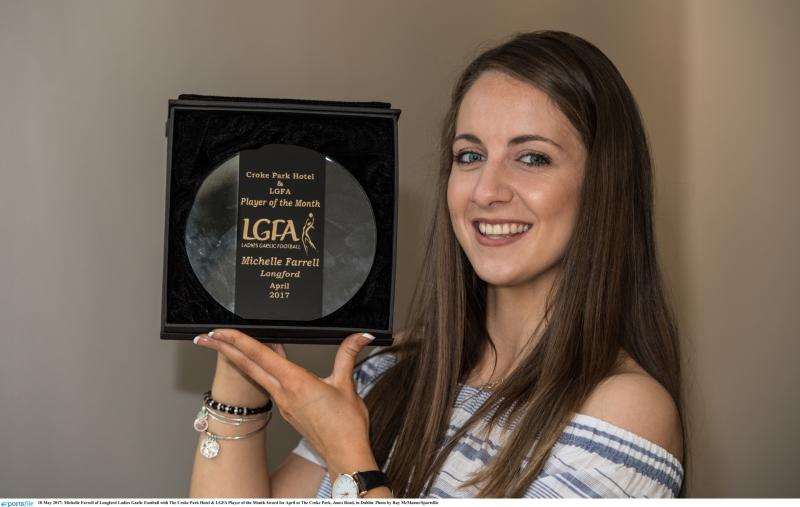 An accomplished ladies football and soccer player, Michelle Farrell works in  Lir Analytical, Longford and she believes that while girls are encouraged to become involved in playing sports, there is a problem in the resources available to girls who want to play sports.

Michelle revealed, “I think there needs to be a focus across all sports clubs in having the right coaches and structured development programmes in order to provide a pathway to senior level and increase engagement.

“For me, sport has played a huge role in my career in terms of the transferable skills from sport to business. I believe that sports organisations should think the same way as businesses, with structured development plans, proper allocation of resources and increased focus on developing the person, not just the player!”

Daughter of Eugene & Mary Farrell, Ballinalee, Michelle believes that on International Women’s Day ‘we should celebrate the women we see making progress and leading in our own lives, whether it’s your family, friends or co-workers’.

Will we ever see LGFA, GAA and camogie merge? “The biggest problem that I can see for ladies footballers is the access to resources that are owned by the GAA. If being under the one umbrella meant that we would have access to those, that would be great. But unfortunately we cannot just merge and just expect to get equal access, as there is a lot more to it!”

I think on days like this it is always nice to sit and read through the positive stories of change for women worldwide, and women’s success stories. But more importantly, we are always very quick to admire the people we see on our screens, but I think on International Women’s Day we should celebrate the women we see making progress and leading in our own lives, whether it’s your family, friends or co-workers. IWD should be a day to show your appreciation to those ladies in our lives!

ChooseToChallenge to me means that that you don’t just accept things as they are or have been, that you choose to challenge aspects that you believe in, whether it’s related work, sport, relationships, social norms etc.

According to the World Economic Forum, gender parity will not be attained for almost a century. Do you agree? Could it be attained sooner? Have you ever suffered at the hands of or know of a family member or friend that has suffered due gender bias?

I think in Ireland we are relatively lucky in that we have a progressive mindset towards gender balance, although it is still evident in some industries, but there is a lot to be considered when debating on a topic like this. Worldwide of course there remains a huge gap, along with the many other related problems.

Personally, I can’t say that I have ever felt at a disadvantage due to gender. I studied and played sports in DCU and I always felt that they were progressive in terms of promoting gender equality in terms of access to resources, scholarships etc.

In my current job, two out three of our management team are women, and throughout our workforce we have a gender balance.

The only difference that is notable is the resources available to ladies intercounty footballers compared to those for males. The WGPA compiled a report last year which identified the hours put into training, travel time, physio bills, additional costs associated with playing etc. by ladies footballers throughout the country - and 93% of players are not receiving any expenses towards this.  Of course with this, we are under different organisations and have different revenue streams, which is another debate that takes a lot of consideration!

Two ladies that have inspired you in your own life and explain why ?

The one that comes to the fore of course is my mother, she has always put her family first, and I think anyone who knows her knows that she's an incredible person!
Growing up as the youngest in my family, as a child I was always exposed to a lot of great women who played a huge role in my development. I always looked up to those people such as my aunts, cousins - and although I don’t have sisters, thanks to my brothers I have four sister in laws who are a constant source of inspiration!
Different people inspire you in a different way, and all of these people have done that for me.
As a sports mad girl growing up in Longford, I always looked up to the Longford Ladies players that were ahead of me at the time, and I think that those girls inspired us to keep pushing the boundaries and try to bring Longford to the next level.

How many years are you playing with Colmcille and Longford ladies? And some of your soccer experiences and the Aussie rules ?

I played soccer throughout underage level with Moyne CS, Longford Town, Leinster schools and with the Irish U15s & U17s.

Recently I played some AFL with the Irish team in the European championships, which we won and qualified us for the world championships which were due to take place in Australia but were postponed due to Covid-19.

Three life / career achievements you are proudest of ?

Currently employed in a management role in a successfully growing business in Longford Town, Lir Analytical
Involvement in Medical and Public Health work in Honduras to help families gain access to basic resources such as water and proper homes.
Completing my education up to Masters Degree level while balancing work, sport

I work in Lir Analytical in Longford Town.

Covid-19 pandemic - how has it affected your work / sports life / no collective training etc / no matches and how are you and your family coping?

I have been lucky in that I am still working and we are doing well there despite the pandemic.

The biggest change for me was definitely the downtime that lockdown has brought.  I always had a packed schedule, on the go from work to football to gym classes to meeting friends to events and everything else. So when the first lockdown was imposed,

I actually enjoyed it, it was the first time in years that I had Sunday mornings to myself!

I think that is definitely a positive that I will take from the pandemic, is taking some time out to chill, and not always having to be on the go!

We were lucky enough to have football in 2020 during the pandemic and it was a great outlet to have, I really enjoyed the club season last year as it was the first time that I had time to spend training with the club team consistently, so that is something that I would like to be continued going forward.

Plans for when lockdown restrictions are lifted ?

And a little curve ball…
Should LGFA and all gaelic games associations ; GAA, Camogie all be under one umbrella? And if yes or no, why ?

There is a huge amount to consider with this one, bearing in mind that the LGFA and the camogie are still struggling to link well together, I think that is the first step in any sort of merger. The biggest problem that I can see for ladies footballers is the access to resources that are owned by the GAA, it can be hard to get pitches, gym areas. and other resources such as funding for developmental programs. If being under the one umbrella meant that we would have access to those, that would be great. But unfortunately we cannot just merge and just expect to get equal access, as there is a lot more to it!

If there was a transfer market in ladies football , what three ladies players would you  bring to Longford and why?

This is a tough one!

Aisling Moloney (Tipperary) - I got the chance to play alongside Aisling in DCU, and not only is she the top footballer in the country at the moment, she has all of the qualities that you would want in a team mate and a leader.

Leah Caffrey (Dublin) - Leah is one of Dublin’s most consistent backs over the last few years. She is another player that I was lucky to get to play alongside and she saved the day for us numerous times, plus, Leah’s mother is a Longford native so it’s only right that she would play for us!

Is enough being done to encourage girls to become involved and play sports ?

Being honest, I think that girls are encouraged to become involved in playing sports, but where I see a problem is in the resources available to girls who want to play sports.

I think there needs to be a focus across all sports clubs in having the right coaches and structured development programmes in order to provide a pathway to senior level and increase engagement.

For me, sport has played a huge role in my career in terms of the transferable skills from sport to business. I believe that sports organisations should think the same way as businesses, with structured development plans, proper allocation of resources and increased focus on developing the person, not just the player!