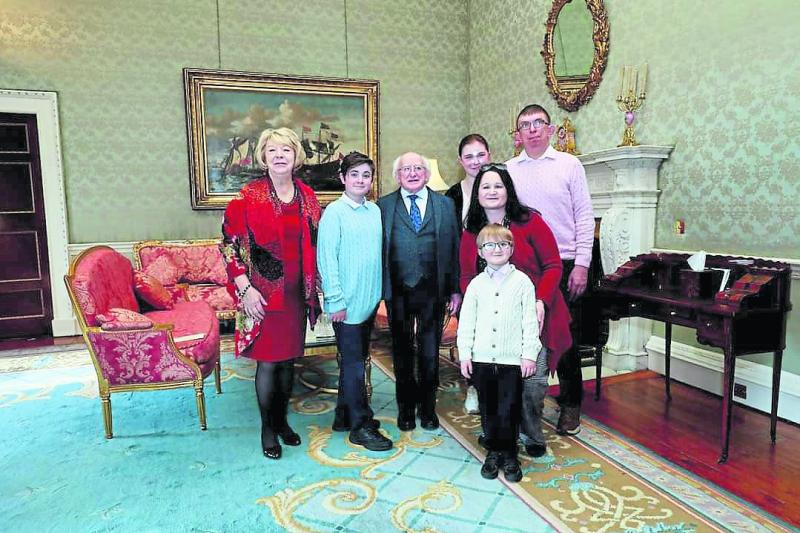 Rare Disease Day 2021 takes place this Sunday, February 28 and it is a hugely important day for Ballymahon’s Erica O'Meara and in her own words, her ‘Rare family’.

A native of Athlone, but residing in the Longford countryside for the past fourteen years, Erica met her future husband Trev in 2001 and they’d a whirlwind romance. “We got engaged just six months after our first date and had a fairy tale wedding 18 months later,” smiles Erica. They’ve three children Kira, Jack and Kalvin.

Erica says many people wouldn’t grasp the magnitude of the impact having one rare child, but she has two rare children and a rare husband.

Her first born, Kira, who is now 16, suffers from NF1 (Neurofibromatosis type 1) Gene Deletion and has had many surgeries. Kira is a proud 5th year student who has sat on the Student Council for two years and she dreams of being an Irish teacher.

Her mum says, “Kira works very hard in school, is a fluent Irish speaker and a beautiful singer and flautist. But she faces a tough road ahead as NF1 Gene Deletion is very progressive especially, during times of hormonal change or any trauma.”

Last year Kira had a breast tumour removed. “The likelihood of it turning cancerous was too big to just monitor it,” explains Erica. “Her most recent surgery was to remove 3 Neurofibromas from her face and a plexiform from her back.”

They discovered that her husband Trev, a wheelchair taxi driver, had testicular cancer at the age of 30.

And the young family were shocked further, Kira was 4 at the time and Jack was 2, when Trev was hit by lymph node cancer.

Erica, remarked, “Trev bravely fought this long battle and to this day, he is suffering from long term horrible painful side effects from the cancer, chemo and the dreaded neutropenia.”

She continued, “People with NF gene deletion have no tumour inhibitor so they can land on whatever nerve they want. Trev’s benign tumours multiplied in number and size. His liver, heart and spleen were enlarged. He needed multiple transfusions, and he graced the walls of isolation in Tallaght Hospital for three months. Trevor developed Gynaecomastia which is controlled by a powerful medication called tamoxifen which is used in the treatment for breast cancer.”

Trev is remarkably resilient and when he was five years cancer free, he and Erica did IVF and they were overjoyed when Kalvin entered the world.

However, little did they realise that lightning was about to strike again. Kalvin’s paediatric team knew from birth something was seriously wrong with him. He didn’t make any sounds at all. He had two small holes in his heart and it was suspected that he had SMA1, so numerous tests were done.

Erica says, “Thankfully for us, it was not SMA. Kalvin has a duplication of the 7th chromosome and a deletion on the 12th chromosome also known as 7.q.11.23 duplication syndrome. There isn’t enough information on how chromosome 12 affects Kalvin at this point.”

“The usual bugs and viruses that children tend to get made Kalvin a very ill baby. He has OSA, regularly has asthma attacks, is intolerant to cow’s milk protein and soya (that we know of).

“Kalvin has social anxiety, global developmental delay, severe speech delay, speech difficulties, delayed dental eruption and anomalies. Now at the age of 6, Kalvin has only 7 teeth. I can't count the variety and amount of surgeries, hospital appointments and inpatient stays to date. His pain threshold is phenomena!

“Kalvin attends many doctors and surgeons in 4 hospitals and all the services in early intervention to date but is still the happiest child you will see in a room!”

Kira was two years old when Jack was born. Erica explains, “Jack was the dream baby in every way possible which we thank God for because it was the main reason we pushed for a second opinion on Kira’s difficulties. How could two children be so different? One was forever fighting to live and her baby brother had no issues whatsoever.”

She says 14-year-old Jack is a fantastic son and sibling who has never held Kira, Kalvin or Trev’s conditions against them even when his social development and friendships took the brunt.

“I've made it my mission to spend more time with Jack and refuse to cancel any of his beloved music lessons. It's the very least I can do for him,” outlines Erica.

She adds, “Jack is extremely bright and has ADHD but he does suffer from gastritis and oesophagitis. I personally believe it’s related to stress. My heart breaks when I think of all the times I've had to send him to stay with family members or cancel his tennis, swimming lessons etc.”

The family’s latest battle is a nasty brain tumour called an Astrocytoma in Trev’s cerebellum for which he has endured five invasive surgeries and seven weeks of heavy radiation.

Erica outlined that since Trev needed his head shaved in preparation for radiation they decided to make it a positive event and three heads went for the chop at the same time.

“Kira donated 10 inches and I donated 20 inches of our hair to the little Princess trust. We call ourselves ‘Team Trev’, I guess it was our way of showing we were all fighting his battle.”

He has another scan this week and as the Covid-19 pandemic shows little sign of relenting, Erica, says she and her family have coped well with lockdown.

Erica has been a member of RARE Ireland since its inception four years ago and she serves as honorary treasurer. They have provided support for over one thousand families and have over 5,000 followers on their social media platforms such as Facebook, twitter, Instagram and Snapchat.

Erica opines, “RARE Ireland kept me sane and the support our family has received can only be described as incredible and extremely generous. Rare Ireland has given me courage I never knew could be possible and the strength to fight for answers, help and more information over these last four years. I will be forever grateful.”

Erica concludes, “We are still a perfect and happy family but, we are also rare!”