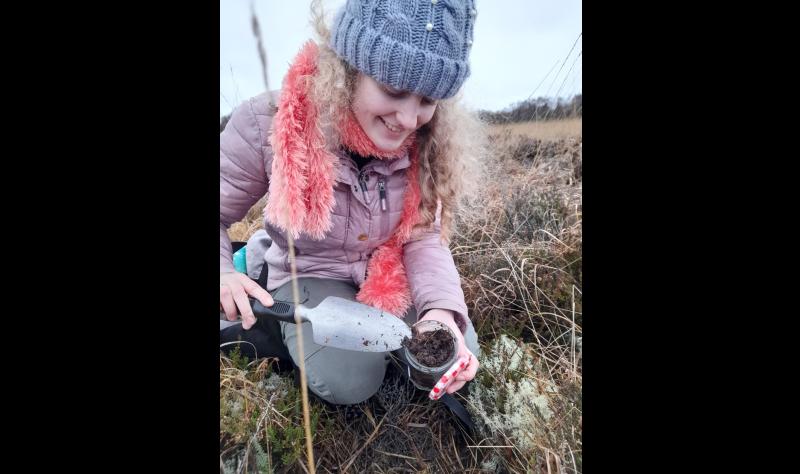 Students and staff at Lanesboro Community College were bursting with pride last Friday when Orla Lyons was announced the first prize winner of the Biological and Ecological Senior Individual Category of the 57th BT Young Scientist and Technology Exhibition (BTYSTE), which took place online this year.

The 17-year-old’s project, entitled ‘Rising from the Ashes: A survey of plants in my local bogs which have been identified as having medicinal properties’ was an opportune study of ways in which the local community can find alternative and innovative ways of using natural resources.

“Traditionally, many bog plants were used medicinally by the people who lived nearby. I was interested in investigating whether the plants that grow on my local bogs have medicinal properties, which could potentially see them play a role in the development of medicinal products,” Orla told the Longford Leader last Friday evening.

“To do this, I would first have to identify which plants were present on my local bogs before I could research their medicinal uses.

“I decided to do this project as Bord na Móna have recently shut down two peat power stations, including the LoughRee Power Station which is across the road from where I live. This has not only caused the loss of jobs in the area but also the Bord na Móna owned bogs are no longer being cut, instead being flooded to help them return to their natural state.

“Once the bogs are flooded, their ability to grow plants will change. This current window before the bogs are completely flooded presents an opportunity to find new ways to get value from this aspect of our natural heritage.”

When gathering her data, Orla looked at three bogs in her local area. She researched the general plant growth in all three bogs but was especially interested in the sundew plant.

“This is a carnivorous bog plant, traditionally used in the treatment of conditions such as warts and bronchitis, which is now showing potential as an anti-cancer agent,” she explained.

“The sundew plant cannot be currently used for pharmaceutics as its habitat (bog lands) is endangered. With 80,000Ha of bog freeing up in Ireland, now might be the time to really start investigating the sundew and other medicinal plants with a previously limited distribution, which could now potentially be cultivated on a wider scale.

“My project shows that, by growing medicinal plants on our bogs, we are not only saving peoples lives with medication, but saving a massive part of our national heritage from destruction, while also contributing to both the local and national economies. What's not to like about that?”

Orla’s project was one of three from Lanesboro Community College. In the Technology category, another student created a stop and go system with an integrated temperature scanner.

A third student entered under the Social and Behavioural Sciences category and did a qualitative and quantitative investigation into the factors that influence the use of non-steroidal anti- inflammatory drugs amongst GAA players.

“We had three projects in the exhibition this year and all students put in a lot of work and all projects were outstanding. We’re very, very proud of each of the students. When young people have an insight and enthusiasm and buy into what they do, they are the future of this country.

“Orla’s project combines science and the soul of the local community. She looks at the jobs lost at Bord na Mona and uses her project to look at ways to fill that void. So it has that twin element from science to local communities.

“Her teacher is Mary O’Brien. We had a number of projects involved this year and the whole school is involved in pushing STEM subjects and so much work is done outside of school,” he added.

“It really is fantastic work. We have had many years of bringing home prizes and we’re delighted that tradition has been kept alive here.

“This project is called Rising from the Ashes and there’s a hope in that. It’s looking for hope - for ways to be creative and innovative - to explore the world around you. And when you give a student the opportunity to see the world around them and to explore that and do something new or make something new, that’s really extraordinary, whether you’re doing it online or offline.”

Orla was thrilled on Friday when she was announced the winner of her category in the exhibition and has expressed a great interest in further pursuing science as a career.

“It was crazy. I couldn’t believe it. I thought maybe I’d get third place and when it was announced, I don’t know who screamed louder - me or my mum,” she told the Leader.

“I want to pursue a career in science. I’m crazy about it. It’s so interesting and I hadn’t realised. The Amazon Rainforest equivalent in Ireland is our bogs. We can get so much out of it and I’m looking forward to continuing to research it. This isn’t the end of it.”