Working together to keep people safe: Community gardaí link up with volunteers in Ballymahon 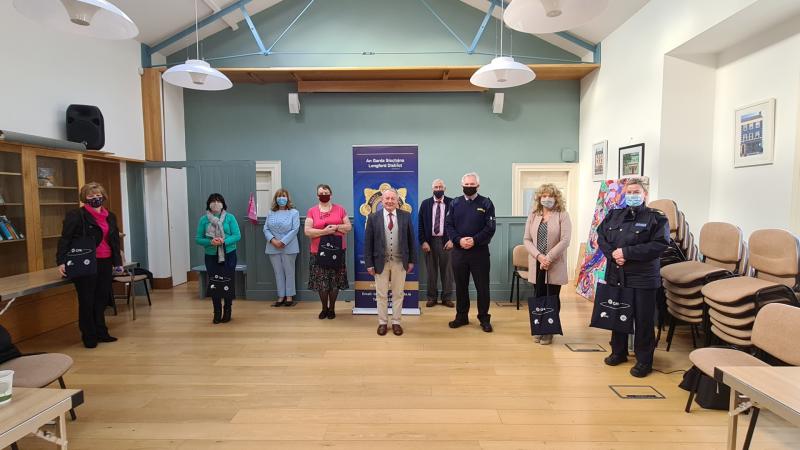 The dynamic created by the community and local gardaí working together to prevent crime in their locality is nothing short of brilliant. That was the overriding message picked up at the launch of the Crime Prevention Ambassador Programme in Ballymahon on Monday afternoon.

Members of the community were joined by Garda Emma Kiernan and Sgt Lionel Mullally of Longford’s Community Policing Unit, as well as chair of the Joint Policing Committee, Cllr Seamus Butler, at Ballymahon Library, where they were encouraged to work together to prevent crime in Ballymahon and surrounding areas.

Crime prevention ambassadors will be visiting their own friends, relatives and neighbours to deliver safety information and to identify the concerns of the community, so that members of An Garda Síochána can more effectively develop a policing plan to keep crime levels down.

At Monday’s launch, Sgt Lionel Mullally explained that, while crime levels are down in a lot of areas, people are still concerned and the Crime Prevention Ambassador Programme aims to address those concerns directly.

“You mightn’t see us at night but if you lift the phone, we’ll be there, so if there is something you’re worried about, you don’t have to be afraid.

“You, our ambassadors, will go out to the people we can’t see and you’ll be able to let Emma and her colleagues know when and where to patrol.”

Sgt Mullally concluded by thanking those who had volunteered for the programme, as well as County Librarian Mary Reynolds, former councillor Barney Steele and JPC chair Cllr Seamus Butler for their support of the initiative.

“With your involvement, we’ll be able to keep people safe,” he said.

His comments were well received by those present, with Barney Steele standing up to commend, not just the community policing unit, but also local volunteers at the Convent Daycare Centre who “made life easier for people” during the pandemic.

“There’s great work going on here in Ballymahon. We feel much better working together when we can support each other,” he said.

“Nobody should be on their own. We’re still operating. It was a difficult year and we’re not out of the woods yet but we’re all still in this together.”

Cllr Seamus Butler was also quick to add his support to the programme and to commend local gardaí and volunteers for their work in the Ballymahon area.

“We are a very small county but we have great community involvement. That’s what makes a difference to people’s lives,” he said.

“This is about protecting communities and I’m looking forward to seeing how it’s going to go in 2021.

“I’d like to congratulate the community in Ballymahon for all their work. There are only 18 elected councillors in Longford but there are hundreds of unelected people doing fantastic work for the community,” he concluded.