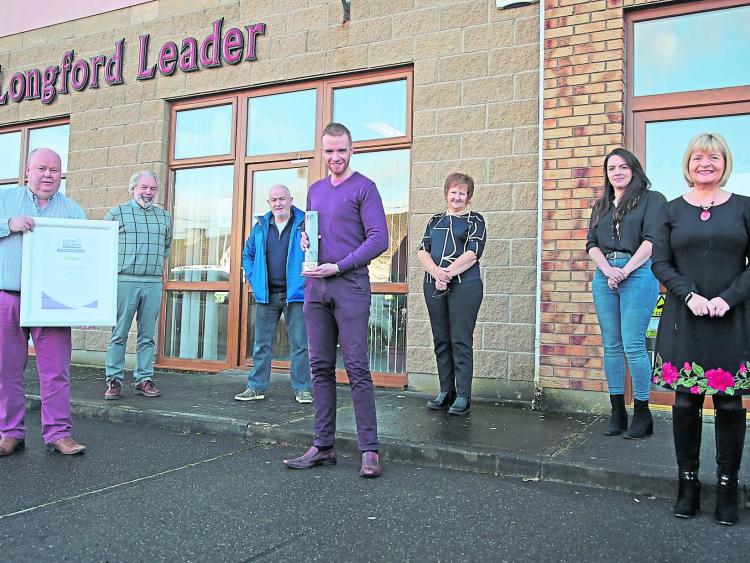 The Longford Leader is celebrating this week following the announcement and selection of senior journalist Liam Cosgrove as the overall winner in the News Story of the Year category in the 5th annual Local Ireland / National Lottery media awards.

There was a record number of entries across all categories for the 2019 / 2020 awards scheme and Liam, who has worked in the Longford Leader newsroom since 2008, fended off plenty of stiff opposition to claim the prestigious overall accolade.

The judging panel, chaired by noted journalist and academic, Dr Jane Suiter, Director of the Institute for Future Media (FuJo) and Associate Professor in the School of Communications DCU, were highly impressed with Liam’s entry entitled ‘Crackdown on criminal gang’.

Commenting on Liam’s award winning story, the judges said: “Gardaí and CAB turning the screw on Longford criminal gang was an important story that people in the area had a right to know.

“The story concerned the seizure of over €200,000 worth of assets believed to be the proceeds of crime. It was a well told news story, with lots of quotes, good sources and no padding.”

Son of Rosaleen and Jim Joe Cosgrove, Liam has one brother Noel and is fiance to Alicia. He was born and raised in Guildford, England before relocating to Dernaferst, Loch Gowna, where his father is a native of. He attended St Patrick's College in Cavan where he sat his Leaving Certificate.

Liam, who is the proud father of daughter Roísín, later went on to study History and Politics at University of Limerick where he obtained a BA (Hons) degree before taking a year out and undertaking a MA (Hons) in Journalism at NUI Galway.

Following graduation, he took up his first role as a junior news reporter with the Cavan Echo, before going on to work with the Cavan Voice. He joined the Longford Leader in March 2008.

Liam is no stranger to the Local Ireland Annual Media Awards and in 2017, along with former colleague Aisling Kiernan, he was shortlisted in the 'News Series of the Year' category.

Unfortunately, due to Covid-19 restrictions, there was no awards ceremony and Liam was presented with his News Story of the Year award and framed citation by Longford Leader Managing Editor Alan Walsh.

Mr Walsh congratulated Liam on his success. “It has been a challenging year for the entire country and Liam’s fantastic achievement has raised our spirits. Liam is a highly respected, reliable and committed journalist who is trusted by the community we serve and these attributes are paramount in an era where ‘fake news’ on various media platforms has become far too prevalent. Heartiest congratulations to Liam and everyone at the Leader is delighted for him.”