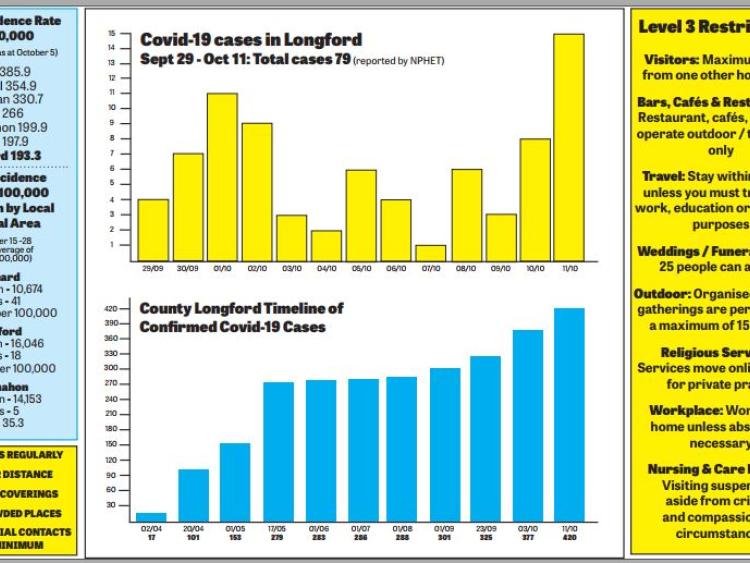 As of Tuesday afternoon, the total number of cases in Longford since the pandemic began stood at 420, following an increase of 15 cases recorded by midnight on Saturday, October 10.

95 of those cases were reported by the Health Protection Surveillance Centre (HPSC) between September 25 and October 11.

Prior to that, in the four months from May 17 to September 23, Longford recorded 46 cases.

The incidence rate in 11 counties is equal to or above the national average - Cavan, Donegal, Monaghan, Clare, Roscommon, Meath, Longford, Cork, Dublin, Sligo and Limerick.

On Monday evening, the HPSC announced 825 additional confirmed cases of Covid-19 across the country - bringing the total in Ireland since February to 43,351, at the time of going to print on Tuesday afternoon.

One further death was reported on Monday evening, bringing the national death toll to 1,827 since March.

Of the latest cases, 426 are men and 392 are women with 78% under 45 years of age, proving that the virus is continuing to spread among younger people.

Government efforts to slow the spread of the virus are ongoing, with the entire country currently under Level 3 restrictions.

The possibility of a short lockdown national lockdown has been ruled out by An Taoiseach, Micheál Martin, with focus shifting instead to regional lockdowns, which he says have evidently been working in Dublin.

Meanwhile, Longford/ Westmeath Fianna Fáil TD Joe Flaherty has called on the Minister for Health to direct that all betting shops should close nationwide for the duration of the Level 3 restrictions.

“Revenue in these outlets has plummeted and industry sources confirm that there has been a shift to online gambling and trade across the retail outlets now is down by at least 40%,” said Deputy Flaherty.

Restaurants, cafes and bars are all closed for in-store dining and drink and yet there is nothing to stop you going in and congregating in a betting shop, he added.

“If we are serious about re-opening the country again in three weeks time then the Minister and his team need to direct the closure of betting shops.”

The Longford TD said he is aware that staff themselves are extremely worried if the shops remain open and he added: “I am surprised that the betting companies themselves haven’t taken the decision to announce the closures. It certainly seems to be at odds with the arbitrary closures of bars and cafes.”

As Level 3 restrictions came into effect at midnight on Tuesday of last week, a number of Longford businesses announced their closure or adjustment to new guidelines.

A large number of Longford eateries, including the Richmond Inn, Torc, the Rustic Inn, Esquires and Mac’s Shack, have announced plans to close their doors again but to continue providing a takeaway service, with Skelly’s Bar in Ballymahon offering outdoor dining options.

However, a number of businesses have announced full-time closures until restrictions are lifted.

“In light of the developments regarding Covid-19 Level 3, we can't facilitate the new restrictions and guidelines and it is also not going to be viable, so we will be closing our doors for the three weeks, we would like to say a sincere thank you to all our valued customers over the past months,” read a statement on social media last week.

Cooney’s Hotel in Ballymahon has also announced that it will be closing its doors in light of the recent announcement.

“We will be fully closed (no takeaway food) during this time. Thank you so much for all of your continued support during the pandemic. We hope to be welcoming you all back again soon. In the meantime, we wish you and your families good health. Stay safe,” read a Facebook statement.

Bia Deas Café in Edgeworthstown, which recently announced its expansion has also revealed that it will be closing.

“We are unable to provide the other options within Level 3 and therefore are left with no other choice but to close for the next three weeks,” management explained.

Moments Café in Longford town was also among those to announce its closure.

“Unfortunately it’s not viable this time to offer takeaway service due to lack of supports. It’s been a tough couple of months for all the local hospitality businesses throughout Longford and indeed this country.

“Hopefully everyone will do the right thing over the next three weeks and enable our hard hit sector and country to rise again.

“We would like to thank you all sincerely for your support over the past couple of months. Hopefully sooner rather than later we will reopen again.”

Current restrictions are, unfortunately, putting a stop to many Halloween activities, with Minister for Higher Education Simon Harris putting out a message to children that “it’s not a good idea to be traipsing around to everyone’s house”.

In a video uploaded to social media on Sunday, he said that the children of Ireland “have been amazing throughout this pandemic” but that Halloween was “going to be different this year” and should be celebrated in other ways at home.

“This doesn’t mean you can’t have a good time and dress up. It doesn’t mean that mam and dad can’t get sweets into the house or you can’t watch a spooky movie,” he added.

Longfod Senator Micheál Carrigy has also asked that people be mindful of those who are cocooning in the lead up to Halloween.

“In the run up to Halloween I would ask parents to speak to their children in relation to their activities during this time and remind them to be mindful of elderly people or people with underlying illnesses who maybe cocooning in their homes,” Senator Carrigy said.