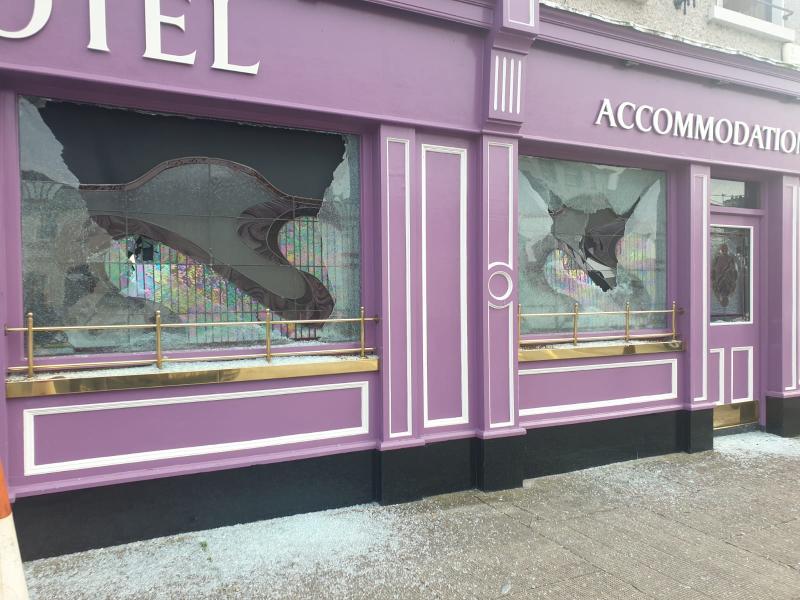 A 21-year-old man was due to appear at a sitting of Longford District Court yesterday (Tuesday) charged in connection to causing ‘significant’ criminal damage to a south Longford hotel.

The man, who lives locally, was arrested less than 48 hours after three front windows belonging to Cooney’s Hotel in Ballymahon were smashed.

The Leader broke details surrounding the incident last Wednesday morning and of the resulting investigation which followed.

That coincided in the arrest and detention of a man at Longford Garda Station under Section 4 of the Criminal Justice Act for much of the day on Thursday.

After almost 11 hours of questioning, investigating officers eventually charged the man with alleged criminal damage before releasing him on bail ahead of yesterday’s District Court sitting.

The Leader also spoke to hotel owner Mike Cooney in the wake of the incident.

He told of how he had been left “utterly devastated” by overnight vandalism which caused tens of thousands of euros worth of damage to his premises.

“My wife and son had only just got in the door and we were sitting down having a chat when we got the call,” said Mr Cooney.

It’s believed a rock or stone was thrown at the windows at around 11:40pm last night, just minutes after the hotel had been locked up for the night.

The damaged windows have been in situ at the long established business since its opening 14 years ago and, according to Mr Cooney, were engineered specifically for the hotel.

“It’s just absolutely devastating,” added Mr Cooney, who has been battling ill health himself over the past number of months.

“Especially when we have been doing our best to get through this pandemic and do everything right, to have this bombshell land on us is completely senseless.”

The 21-year-old man who appeared in court yesterday is due to reappear on October 27, when DPP directions have been received.