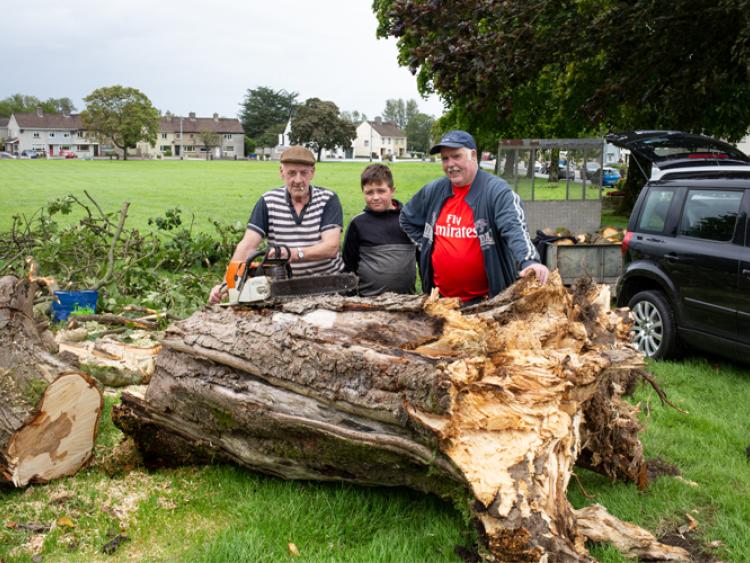 A tree planted in 1954 in Teffia Park, Longford, succumbed to Storm Ellen and pictured are Pat Briody and his grandson Tommy along with Ned Stokes, helping with the clean up Picture: Michael Croghan

The clean up bill associated with the fallout from Storm Ellen is expected to cost in the region of €10,000.

That's according to a provisional estimate carried out by Longford County Council following last week's high winds and rain which left thousands of homes and businesses without power.

“The main impact of the Storm in Longford was a number of fallen trees throughout the County which in some cases led to power outages,” said the council in a written statement to the Leader last week.

More than 4,000 households and commercial premises were affected by some form of electricity outage when the first gusts of high wind hit the county last Wednesday night.

Cathaoirleach of Longford County Council, Cllr Paul Ross was quick to praise the efforts of the local authority's external crew personnel in helping to minimise the storm's disruption at opposite ends of the county.

“There was a tree down in Abbeyshrule at 8:10pm and by 8:30pm outdoor staff were out dealing with it,” he said.

“It was the same in north Longford and you have to compliment these workers on how they responded in what were dangerous conditions.”

Photo caption: A tree planted in 1954 in Teffia Park, Longford, succumbed to Storm Ellen and pictured are Pat Briody and his grandson Tommy along with Ned Stokes, helping with the clean up Picture: Michael Croghan Photography