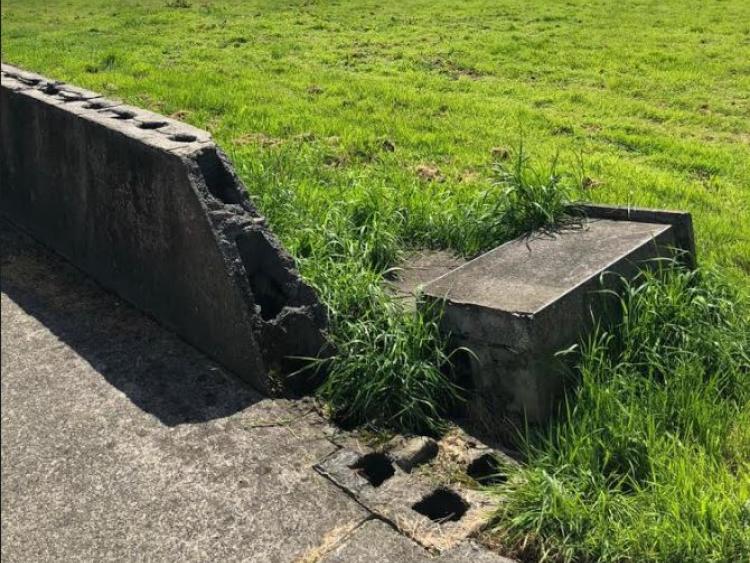 Auburn Park in Edgeworthstown, where a wall has been damaged

A number of issues in relation to Edgeworthstown estate, Auburn Park, were raised by Cllr Paul Ross at last week’s meeting of Ballymahon Municipal District.

The local councillor had three motions on the agenda for the estate, which is in need of a number of repairs and maintenance.

“The entrance wall has been damaged for the last number of years. It was hit by a car at one point and was knocked and it needs to be repaired as a matter of urgency,” said Cllr Ross.

Area Engineer for Ballymahon Municipal District Paul Newell said that he has looked at the damage to the wall and that the council “will certainly do that”.

In the same estate, Cllr Ross explained, there is a four-bedroom house, which has been burned out.

“The roof is gone,” said Cllr Ross who called for a dereliction notice to be placed on the house, which is “over 12 months in ruins”.

“It’s a den now for antisocial behaviour. It maybe needs to be knocked and built from the ground up,” he said, adding that the derelict property is not good for the rest of the town.

“As soon as one house goes down, the whole thing goes down, and we can’t let Edgeworthstown go down.”

Director of Services John McKeon agreed that the council will go onto the derelict site and get back to the members with an update.

Cllr Ross’ final motion for Auburn Park was a call for the council to install speed ramps at the estate, and also in Devine Crescent, “in the interest of child safety”.

“It’s a long, straight stretch into Auburn Park. Most of the estates have speed ramps. Some don’t,” said Cllr Ross.

“A lot of the estates were taken over in the last five years and speed ramps would be the best thing to slow down traffic. There’s a large green area there and a lot of kids.”

Area Engineer Paul Newell explained that, in accordance with traffic management policies, speed ramps “are only considered as a last resort” and that a speed assessment must first be carried out before appropriate measures are put in place.

“I don’t feel that answer is sufficient,” said Cllr Ross.

“There are kids out there day and night. I don’t think that policy covers estates. Maybe we could get the Housing SPC or Roads SPC to look at it.”

Cllrs Colm Murray and Pat O’Toole had similar issues with a need for speed ramps in housing estates and suggested that the three put together a document to be brought to the relevant SPC for consideration.