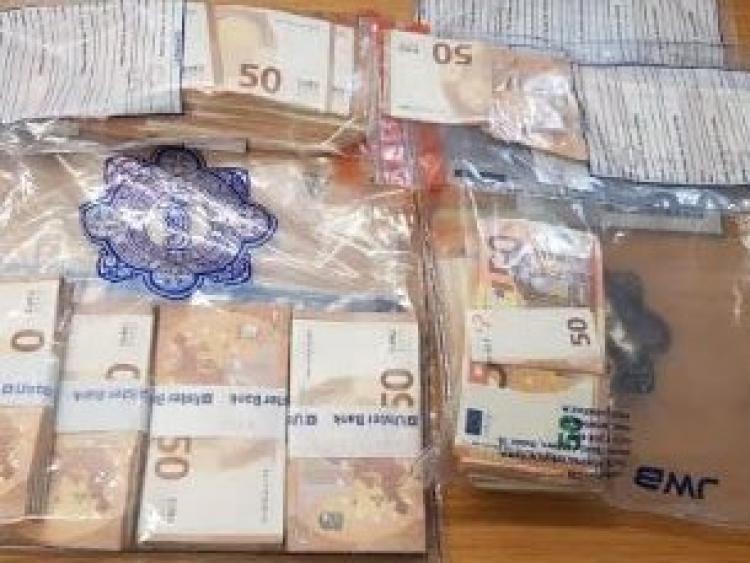 A sample of some of the €40,000 which was seized by gardaí earlier today

A well known Longford crime family has seen its financial clout seriously dented thanks to the latest wave of search operations carried out by gardaí, the Leader can reveal.

It comes after over €140,000 in cocaine, ecstasy and cannabis were seized by gardaí following three separate operations over the past 48 hours.

A man in his 60s, who is a licensed taxi driver in Longford was arrested at the scene and appeared in court the following day in connection to the incident.

ALSO READ: Longford taxi driver granted bail following seizure of €50,000 worth of drugs in his vehicle

Then, on Friday €52,000 worth of drugs were seized by officers attached to Longford/Roscommon's Divisional Drugs Unit as a result of a search of farmlands in the Ballinalee area.

No arrests have been made but investigations continue apace with senior garda officials confident of further progress being made over the next number of days.

The third and final operation came during the early hours of this morning when Gardaí in Longford seized cash in excess of €40,000 as a result of information received regarding suspected money laundering.

The Leader understands that operation was very much intrinsically linked to a well documented Criminal Assets Bureau (CAB) operation two weeks ago which led to the confiscation of cars, caravans and luxury jewellery in a seizure which could fetch €500,000.

The prime target of this morning's raid is a notorious Traveller crime faction who are heavily involved in drug dealing, prostitution, intimidation and extortion.

It's understood members of the gang have been turning up the heat on beneficiaries of its money lending activities in a bid to recoup the losses sustained from the recent CAB raid.

However, it is understood this morning's seizure has inflicted another blow to those well laid plans with senior gardaí vowing to continue to ensure those involved in organised crime endure the full rigours of the law.

"It's a serious effort and shows the level of commitment we have in clamping down on this type of activity. We always said we would act and act decisively and that's what we have been doing and will continue to do," said Supt Jim Delaney as he thanked members of the public for their co-operation in the gardaí most recent efforts into tackling organised crime in recent weeks.