Work continues on state of the art Edgeworthstown library

Flagship Project: Library to be the keystone project of the overall regeneration of Edgeworthstown 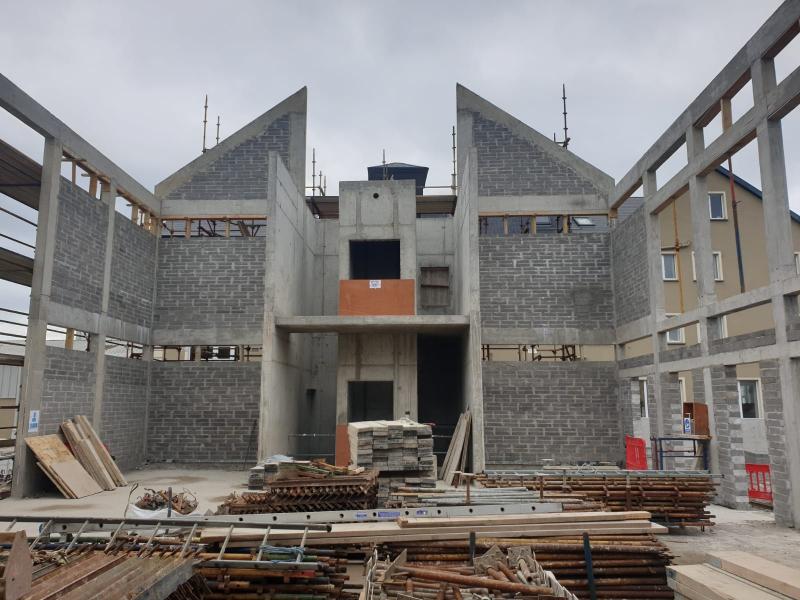 The new state-of-the-art library which is being built in Edgeworthstown will be the keystone of the regeneration of Main Street Edgeworthstown, according to Cathaoirleach of Longford County Council, Paul Ross.

The development of the building is moving on nicely as the country emerges from the effects of Covid-19 and will be a huge addition to the south Longford town.

“This project is jointly funded by the Department of Rural Community Development and Longford County Council in partnership with the community in Edgeworthstown,” said Longford County Librarian, Mary Carleton Reynolds.

“Edgeworthstown District Development Association secured this very suitable site on the Main Street and they have worked closely with Longford County Council to ensure that the town has a modern state of the art community library.

“A well resourced, dynamic library, open to everyone, can contribute hugely to the social, economic, and cultural wellbeing of the community.

“Edgeworthstown has a wonderful community spirit and a very rich history and heritage and our hope is that this library will be a welcoming space and the ‘go to’ place for the whole community. This project is an integral part of an overall Regeneration project for the town,” she added.

The state of the art building will contain a number of office spaces and Edgeworthstown Community Development will also be moving into the building, according to Cllr Paul Ross, who said that the building was due to open in June but, due to Covid-19, has been put back four or five months. It is hoped that the €4.5m investment will be opened in the autumn.

“Everyone is very excited about it. It’s part of a bigger regeneration project,” said Cllr Ross, who added that Main Street has also undergone streetscaping and lighting upgrades.

“There will also be a new business hub in the Ulster Bank building, which will be crucial to increasing footfall in the town. It will be the first hub to be finished in Longford,” he added, acknowledging the work planned for the Providers building in Longford town.

Hubs will have a vital part to play in getting people back to work, he stressed, as many people are now working remotely. Such a facility will be paramount in getting young people and workers into the town.

“But the real flagship project for the town is the library. Edgeworthstown District Development Association did fantastic work to acquire the site and to hand it over to the council with trust,” said Cllr Ross.

“That trust is being repaid now and we have it almost finished. And there has been a huge community buy-in. Edgeworthstown was a rapidly developed town during the boom times, which brought with it its own problems too.

“The town struggled with the rapid growth and the new communities but now we’re looking to bring people together and the library will have space for receptions and functions for the community.”

The new schoolhouse has also been upgraded, and all estates in the town have been taken in charge. Meanwhile, a new walkway is due to be opened in the coming weeks, which will connect every estate to the local school, and link up the entire town in a safe manner for pedestrians and cyclists.

“The library is the flaghip project in the centre of the town and it’s great to see it as far on as it is,” said Cllr Ross.

“It’ll be a great honour to be mayor while it’s being opened.”

This is also the first time Longford has had a link with AIT, who will be joining up with the new hub in Edgeworthstown, he added, which is a fantastic step forward.

“Edgeworthstown needs young people in the streets, going for coffee, drinking in the pubs. It would make a big difference, and this will be the start of all that,” Cllr Ross concluded.