Cian’s Kennels to the fore of Longford fundraising efforts 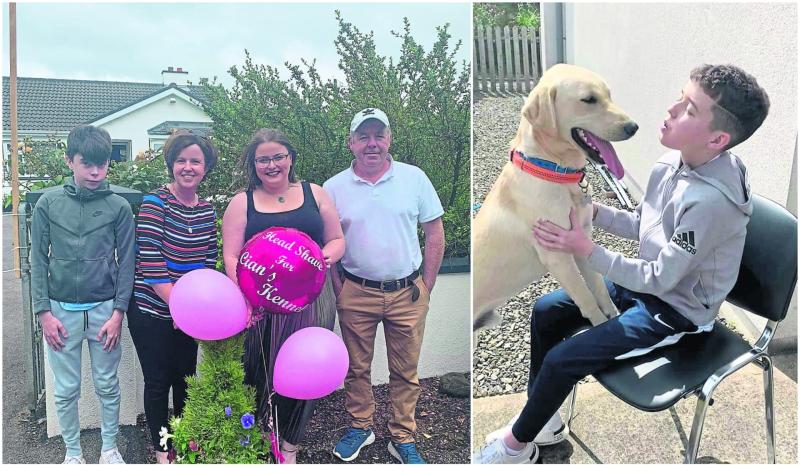 Left: Michaela Cox, pictured prior to her head shave in aid of Cian's Kennels and with Cian's family, his brother Shane and parents Evelyn and Enda. Right: The late Cian Neary with his dog, Cooper

Covid-19 has stalled a large number of fundraising events across the country, but local charity, Cian’s Kennels has certainly not been forgotten as a number of people and groups organise money-raising attempts for the charity.

Cian’s Kennels is a unique charity, set up in memory of Cian Neary, from Killashee, who passed away last year following a battle with cancer.

While he was in hospital, his shining light was his dog, Cooper, whom his parents made great efforts to bring to Dublin to see him.

In his memory, Cian’s Kennels will see a kennel facility set up at the Ronald McDonald House, so that other children in hospital can see their beloved pets.

In the past few weeks, Killashee woman Michaela Cox shaved her head for Cian’s Kennels, raising more than €4,000 for the charity.

Karen, Elizabeth and Jane O’Boyle will be doing a charity swim today, Wednesday, July 15, in aid of three charities close to their hearts - the Ollie Cox Injury Fund, the Kevin Bell Repatriation Trust and Cian’s Kennels. Their GoFundMe account had also raised in excess of €4,000 at the time of going to print.

A third event, a cycle from Malin to Mizen, was due to take place this year but has been placed on hold due to the current Covid-19 pandemic.

“It had to be postponed, but we have a date set for that next year,” said Cian’s mother, Evelyn Neary.

“The plan is for the cyclists to pass through Longford on Cian’s 17th birthday, which is on April 18.”

The event will mark the local launch of the charity but Evelyn is hoping to host the national launch as early as October.

Covid-19 has slowed things down for the launch of Cian’s Kennels, Evelyn explained. A submission has gone to the hospital and there are still plans to go ahead but things are somewhat slower because visiting the hospital is currently not an option.

“But because we can’t get into the hospital or to progress anything structural, we decided to provide families with framed photos of their pets, with the Cian’s Kennels border on it, in partnership with County Photos in Roscommon,” said Evelyn.

“Covid-19 slowed us down a little bit, but it just means we’ll be ready.”

Evelyn and all of Cian’s family are grateful for the fundraising efforts to date, expressing particular gratitude to young people in lockdown who are spending their extra time coming up with ideas for the charity.

“We were in hospital with Cian this time last year and we were in a dark place. And I think it’s so much worse for families now, with only one parent allowed in to visit,” said Evelyn.

“So it’s more important now than it ever was to be able to give them something to look forward to.”

Cian’s Kennels is on Facebook and shares all updates on the charity, as well as current and future fundraising efforts.

To donate to the charity swim, which takes place today in aid of Cian’s Kennels, the Ollie Cox Injury Fund and the Kevin Bell Repatriation Trust, see O’Boyle Sisters Charity Swim on GoFundMe.