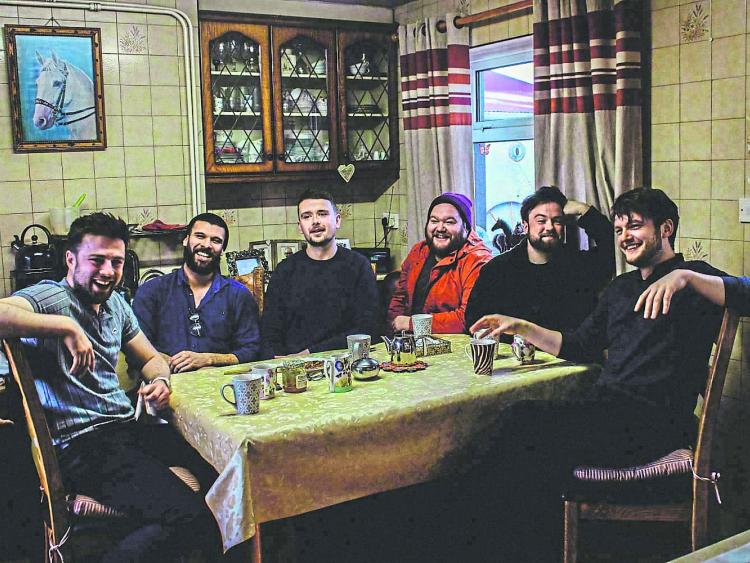 Midlands band FIELDS released their debut album, The Silence of Staying In, in the midst of the Covid-19 pandemic

Covid-19 has certainly brought out the most creative of people and midlands band FIELDS is no exception, with their debut alsbum, The Silence of Staying In, currently available to download or stream.

FIELDS is an Irish six-piece alt-folk band, based in Dublin, with roots spread across neighbouring counties Monaghan, Cavan and Longford.

Drawing inspiration from the Irish heartland - a sleepy and often maligned region which is wide awake with spirit and charm, FIELDS combine powerful, synth-driven melodies with carefully entwined harmonies and captivating guitars, to create an expansive soundscape.

Active since November 2015, FIELDS began as the solo project of singer-songwriter Seán O'Brien, before progressing into a fully-fledged collective.

FIELDS’ first offering, an EP entitled In the Morning, was released in 2015 and has since amassed over three million streams across streaming platforms.

Since then, the band has released a series of singles to substantial acclaim, including 22:22, Get Worse and Border Boys.

In April 2020, the band released their debut full length, titled The Silence Of Staying In - a 12-track LP, which was created over a three-year period between Donegal, Galway and Dublin.

The album has been marked with several live streams from frontman Seán O'Brien given recent events. The band hopes to be announcing several more live initiatives over the summer months.

The album is the culmination of three years of sessions, in which the band roamed between the remote environs of Loughrea, Galway and Glencolumbkille, Co Donegal and the Dublin Mountains, home to Hellfire Studio, where most of the final record was recorded and produced.

The ‘Songs of Silence’ take inspiration from the music of Bruce Springsteen, The National, and the War on Drugs.

“It's been a difficult time to release an album,” said Killian Leahy who, along with Luke Butt and Kevin Farrell are the Longford members of the band.

“With social distancing in place, we had to cancel our album launch tour which was due to be across Cork, Dublin and Galway. We’re hoping to reschedule those dates as soon as it’s safe to do so.

“Meanwhile we are waiting until it’s safe to get back in a room together and start playing and working on new material. On the plus side, the album has amassed over 53,000 streams since its launch on April 17 and we couldn’t be happier with the response.”

As restrictions ease, the band is hoping to get back into the practice room and work on new material.

“There will be more live gigs planned online over the summer, and we’re looking at a couple of cool ideas to bring our live show to wherever people may be allowed listen to it,” said Killian.

“I guess in between we’re just trying to push album streams and sales as much as possible through social media until it’s safe to get back to it.

“We’re really looking forward to seeing ‘this must be the place’ showcase by Shane Kennedy and gang and I’m hoping to join it later in the summer when social distancing restrictions lift and I can travel home to Longford.”

Things have changed drastically for musicians over the last three months or so, with Covid-19 changing the way musicians share music - possible for good.

“The future of live music as we knew it before this is a bit of a grey area at the moment, but we’re going to keep writing and keep recording with the hope that by this time next year, we’ll be gigging away and everything will be back to normal again.

“Since the album has received such a warm welcome we're just mad to get back to it.”