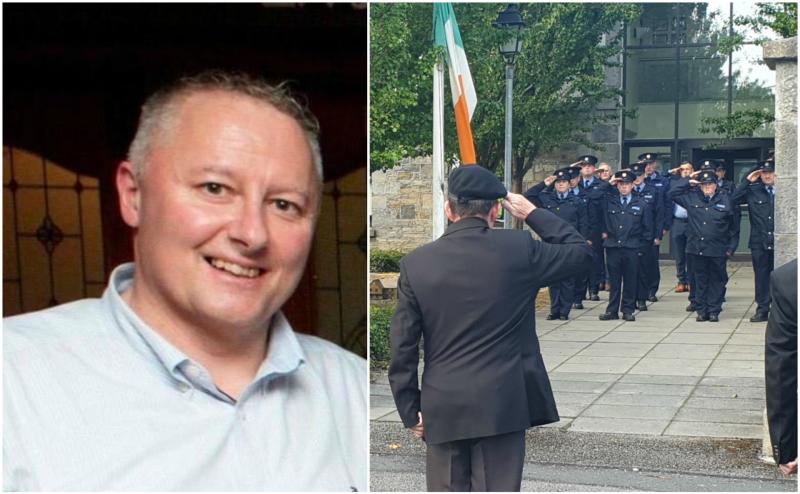 Left: The late Detective Garda Colm Horkan, who was laid to rest on Sunday. Right: Longford gardaí salute their fallen colleague during a minute's silence at 12 noon on Sunday

The late Detective Garda Colm Horkan was like “a template for what you’d want a guard to be”, according to Granard’s Superintendent Seamus Boyle, who attended the state funeral on Sunday.

“Colm Horkan was my colleague and friend, with whom I had the honour to work for three years,” he told the Longford Leader.

Supt Boyle served as Superintendent in Castlerea Garda Station for three years before moving to Granard last year and had the privilege of working very closely with Detective Gda Horkan, who was tragically killed while on duty last week.

“He performed his duties with integrity, empathy and loyalty, both to the community he served and his colleagues,” said Supt Boyle of his fallen colleague.

“Colm would be the last person to call himself a hero, but a hero he was in every respect. An Garda Síochána means ‘Guardians of the Peace’. We have lost a true Guardian of the Peace.”

Detective Garda Horkan’s funeral took place at 12 noon on Sunday and garda stations across the country, including those in Longford, Granard, Ballymahon and Lanesboro, led a minute’s silence in tribute to him.

Members of the public stood in solidarity with local gardaí, past and present, on Sunday afternoon, as did ambulance and fire services, members of the ONE and Defence Forces and Lanesboro Triathlon club.

“He was probably one of the best guards I’ve ever worked with. If you wanted to get a job done, he was the fella to go to. He had a great way about him with everybody. He was a great team person,” said Supt Boyle.

“If you were creating a template for what you’d want a guard to be, Colm Horkan was that. There was no job too small and no job too big. He was a very loyal supporter of mine while I was down in Castlerea, there was no doubt about it. Even since I left 12 months ago, we would’ve maintained contact.”

Longford’s Supt Jim Delaney also expressed his deepest sympathies to the family of Detective Gda Horkan on behalf of all at Longford Garda Station.

“Colm served his community with the highest integrity and distinction and, in paying the ultimate sacrifice, demonstrated every proud tradition of An Garda Síochána, epitomising what it really means to be on the front line,” he said.

The tragic news broke last Thursday morning, throwing a shadow of loss over the entire country as the nation came to terms with what had happened in Castlerea.

Garda Representative Association member for the Longford/Roscommon Division, Dave Conroy, told the Longford Leader that gardaí are “traumatised” by the incident.

“Colm is the 89th guard to lose his life tragically while on duty. It always resonates with members that every time they go on duty, that’s the peril they face. You’re taking your life into your hands serving the community.

“On behalf of the GRA I want to sympathise with the family, friends and colleagues of Detective Garda Colm Horkan,” he added.

“His tragic passing is a massive loss to the area of Charlestown, his home place, but also the community of Castlerea, where he served with distinction and was very much loved by colleagues in the community there.

“Everyone who encountered him has nothing but a good story to tell about their involvement with Colm.”

Detective Garda Colm Horkan was alone on patrol on Wednesday night, June 17 when, shortly before midnight, he stopped a man on a motorbike.

A conversation between the two became an altercation during which the man managed to remove Detective Gda Horkan’s gun from its holster, using it to shoot at the detective 15 times until he ran out of bullets.

Gda Horkan died of his wounds just before midnight on Wednesday, June 17. Stephen Silver, Aughavard, Foxford, Co Mayo, was arrested at the scene and immediately charged with murder.

He appeared before Judge Alan Mitchell late on Saturday night and was remanded in custody to Harristown District Court on Friday, June 26.

'If you were creating a template for what you'd want a guard to be, Colm Horkan was that', says Granard Superintendent of his close friend