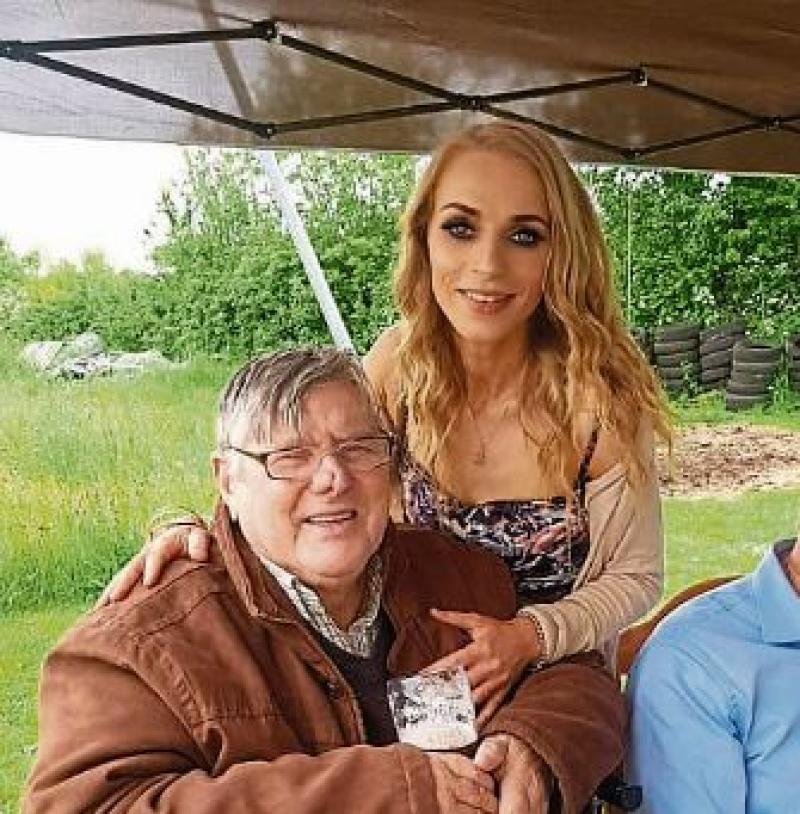 Dympna Tully, 36, who has been caring for her dad Patrick Stapleton for the past 10 years

A Longford mother of two has spoken of how she feels carers were effectively forgotten by the State during the recent coronavirus outbreak after it emerged vital PPE equipment had to be provided by a nationally based non-profit charity.

Dympna Tully heaped praise on Family Carers Ireland, a body which represents over 350,000 carers nationwide in the midst of a global pandemic which has already claimed more than 1,500 lives across Ireland.

The 36-year-old, who is a full time carer to her 83-year-old Dad, Patrick following the passing of her mother Rose in January 2011, told of how she would eventually go on to assume the mantle of family carer from her later mother and “rock of our family”, Rose.

“Mummy was always Daddy’s carer for as long as I can remember for 20 or 30 years,” she recalled.

“Growing up I can always remember Daddy being sick and being in hospital with doctors being in and around the house but I never really understood.”

In May 2010, Dympna's mum was diagnosed with cancer and went quickly downhill before sadly passing away barely eight months later.

“In December and just before Mum went into a coma, she held my hand and asked would I take on the role and of course without hesitation I said I would,” said the Killashee woman.

“I was 26 at the time and I had a five month old baby and a three year-old so I didn’t really have a chance to ponder or sit, it was straight in caring for Daddy.

“It meant I didn’t really get a chance to bond with my new baby or grieve for Mum.”

Dympna spoke to the Leader in the wake of Family Carers Week in a bid to highlight the unstinting efforts of the role in scores of communities up and down the country.

Given her Dad’s condition, C.O.P.D. or Chronic Obstructive Pulmonary Disease to give it its full title, Dympna said but for the diligence of Family Carers Ireland and staff at Longford Community Mental Health Centre, her task in tending to her father would be considerably more arduous.

“There are around 390,000 family carers in Ireland and save the State €10bn a year and it’s a job that is very unseen especially through Covid-19,” she said.

“I don’t think we were supported enough especially as it was Family Carers Ireland who sent out PPE equipment we needed.”

It's something that's not lost on the man Dympna now cares for on a daily basis.

Patrick said the loss of his life partner and mother to his seven children was a cross he still struggles to carry even the best part of a decade on.

“I was lucky though with Rose,” he said.

“I met Rose at a dance in the Annaly Hotel and we had been pen pals before we met up.

“Rose was from Armagh and nursing in England but she had relations in Roscommon and used to visit Longford for dances,” he said, while joking about the tough time he had “beating off all the other men” who caught their eye.

“I never looked back after meeting my beautiful Rose, long blond hair like my daughter Dympna.

“We got married in Liverpool in 1974 and she was a topping worker.

“Poor Rose looked after me for 20 years.

“She cared for others too, but God rest her, she got the dreaded cancer. It was a huge hardship losing her and I miss her every day.”

Having battled skin cancer while attempting to manage his everyday battle with C.O.P.D. Patrickhas likewise faced the hardships that come with tackling anxiety and depression.

“I've been attending the Mental Health Clinic in Longford for almost 40 years,” he added, stating how his own faith and belief in God helped carry him through.

“Prayer has helped me and I went to Pat Clarke, a faith healer, a religious man who lives in Collinstown near Mullingar.

“I got a huge relief from visiting him before the lockdown, huge relief,” he explained.

Those aids were vital supports Dympna was only too keen to espouse as she acknowledged the part played by Longford Community Mental Health Centre.

“Obviously with Covid-19, mental health will be huge now and with Daddy and as part of his condition, he suffers from depression and anxiety and all the way through Covid-19 and despite the restrictions in place a lady came out to visit him to make sure he was okay. They were just fantastic and could not do enough for you.”