Remembering Ned McEvoy, the man who fought for farmers’ rights 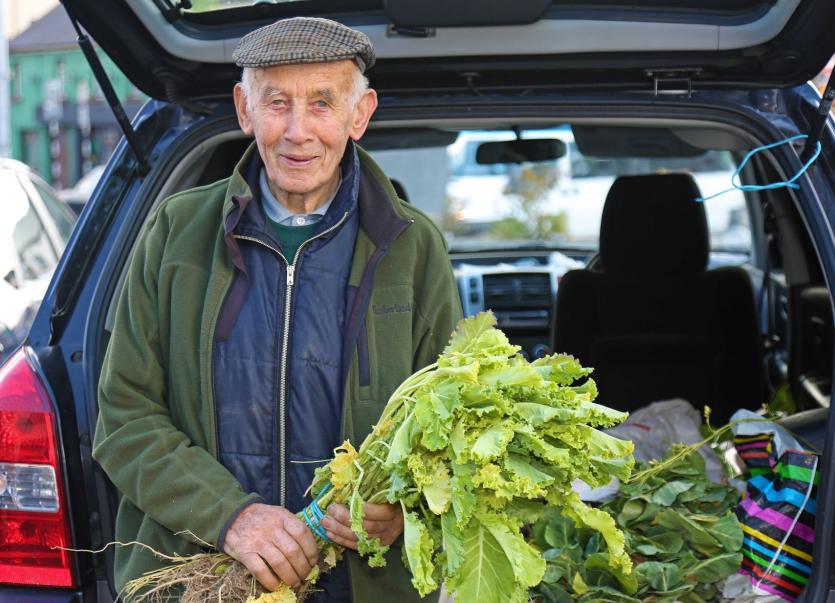 Many tributes have been paid to the late Ned McEvoy, Ballinalee, who was a legendary and familiar presence at the Longford Farmers Market for over sixty years.

Paying tribute, Longford Farmers Market, said: “It is with great sadness that we learned of the death of Ned McEvoy.

“This gentleman sold his cabbage plants every year on the Market Square for over 60 years. He will always be remembered by us traders as the man who took on the Urban Council many years ago when they tried to extinguish the farmers rights to sell their produce on the Market Square in Longford town.

“Ned took his case to the courts and won that battle on behalf of all farmers, for that we will always be grateful. Rest in Peace Ned.

“To his family we extend our deepest sympathies.”

Ned reposed at his home in Kiltyclough on Friday, May 15, with Funeral Mass taking place on Saturday, May 16 in The Holy Trinity Church, Ballinalee, at 12 noon, followed by burial in St Emer's Cemetery.

“He was a hardworking man, whose life, alongside his wife, was spent happily in looking after his family, any one of whom is easily identified, as carrying his strong work ethic in their lives.

“Living in the close knit town land of Kiltyclough, their lives were lived in harmony and cooperation with great neighbours.”

A Memorial service will be held to celebrate Ned's life at a later date.

Ned's family are sincerely grateful for your thoughts and prayers at this difficult time.

In May 2017, Longford Leader journalist Liam Cosgrove interviewed the late Ned McEvoy at the Farmers Market and below we reproduce that very enjoyable article where Ned's humour and loyalty to his family shone through.

The term gentleman is a term of endearment that’s well worn and in certain instances often overused, but is one which unquestionably sums up the virtues of Ballinalee’s Edward McEvoy.

Edward, or Ned, as he is more commonly referred to, is from a generation who unfortunately all too often go unnoticed in today’s fast paced digital age.

At the evergreen age of 93, the Kiltyclough man knows all about what a hard day’s work entails.

An agricultural contractor by trade, in more recent times the affable pensioner has taken to vegetable selling, becoming an almost permanent weekly fixture along Longford town’s Market Square in the process.

With that in mind, the Leader decided to take a look for ourselves and ask what makes a man of such venerable seniority tick.

Upon our arrival on what was a rather overcast Saturday morning there appeared to be no evidence of market trading, just a posse of cars parked up at the side of the street.

Then, as we moved closer, a dark coloured jeep with an elderly looking man wearing a peak cap caught our eye.

“Are you Edward McEvoy?” the Leader shouted as the man got out from the driver’s seat.

“Be jeeney, I am,” came the jovial, softly spoken reply.

After a brief exchange in which introductory pleasantries were interspersed, the conversation turned to what exactly local consumers could get their hands on.

Not shy to reveal he had been a worker “all my life”, the north Longfordian quickly explained that Longford was not his only port of call where his wares are bartered.

“Sure, I do be in a different town nearly every day of the week,” the Leader was told in no uncertain terms.

“I do grow the cabbages at home….I suppose it’s in the blood. I am at it all my life, I don’t know anything else,” he continued.

A one time pupil at the since closed Molly National School, Ned certainly did well for himself despite the economic doldrums Ireland found itself in.

“I worked in the bog of course when the turf was being cut in the 50s,” he vividly recalled.

“The County Council cut turf in many of the bogs, they commandeered the bogs I suppose you could say.”

That, as has been well charted, was a time when Ned saw many of his friends depart these shores for calmer financial waters.

Back then, Longford and much of its surrounding hinterland was mired in policy-induced austerity and political instability, not helped by a deluge of “revolving door” governments.

Not that politics had appeared to take any great measure in the story Ned was endeavouring to tell.

Family was clearly more pertinent to the genial nonagenarian.

Pausing to reveal he and his beloved ‘other half’, Mary, reared 12 children, our conversation suddenly took a more forlorn direction when revealing how the couple’s youngest, Oonagh, passed away aged just 33.

That was only three years ago, a time Ned understandably looks back on with profound sorrow.

His deep admiration and love for his wife of 56 years was equally evident. In revealing the age gap between the pair to be ten years, the inevitable question of how such a union came to pass.

“Ah, she took pity on me,” chuckled Ned, more out of sarcasm than any great veneer of sincerity.

And as for the secret to over half a century of successful marriage, the response was just as amusing.

“Ah be the holy, I picked a good woman,” cackled Ned, as the Leader asked whether that feeling was reciprocated.

“You had better ask her,” we were cheerfully told.

Joking aside, there was a far more salient question which was pressing, such as just what makes a man of 93 years young take to the roads day in and day out in order to sell the occasional cabbage head.

“The chat,” was not, for the first time the quick witted response to come from the Ballinalee man.

“It is surely (social side of it). That’s what’s keeping me at it as well as the few bob.”

The few bob Ned has evidently served the self styled vegetable grower well, illustrated best by the well presented jeep he proudly calls his own.

As for the hidden ingredients behind his longevity, not surprisingly “hard work”, “good food” and “good spuds” were ones to come in for specific mention.

In comparison to his modern day contemporaries, the ability to build up a vast repertoire of hobbies and pastimes was not something which came naturally to many of his generation.

That said, Ned still managed to find time to play the odd bit of football, initially for Colmcille and later with Sean Connolly’s.

Asked about if he was fortunate enough to pick up any medals in that time, Ned was nonplussed, saying he was one of those players who rarely kicked up a fuss as to their favoured position.

“Ah sure, I played anywhere I was put. None of that bothered me,” Ned quipped, as he turned his attention to the county’s current crop of talent under the tutelage of Denis Connerton.

“Ah now aren’t they a great team, Longford. The makings of the team is still there all the time. Look at the way Mullinalaghta is after coming up.”

His comical retorts certainly kept the Leader on its toes throughout the course of our 20 minute interview as did his take on going on holidays.

“Holidays? Divil a bother,” interjected Ned, as he broke off our chat to say hello to one of his daughters who had pulled up alongside us.

“What time you finish up?” the Leader asked, in a light hearted attempt to keep things moving.

“Oh, when they (customers) quit coming,” Ned remarked, adding: “sure around three or so I suppose.”

And with that, sure enough an intrigued looking shopper approached from across the street.

Not wanting to interrupt any prospective purchase, there was one last question the Leader was anxious to ask.

“Not everyone was as lucky as I was because I started as an agricultural contractor for the local farmers.

“I was good at it so it meant there was no one else harming my trade.

“It’s different now of course. There are plenty of opportunities for young lads to back then because it was a different world you see.”

Different or otherwise, Ned was quite open about being offered the chance to start all over again, if the opportunity ever presented itself:

“Ah jeeney, I’d be very cute if I did.” Somehow, you get the feeling he means every word.